LAS VEGAS — Ram is thriving. The truck brand is coming off its best sales year ever, and its all-new 2019 Ram 1500 has won just about every truck award there is to win, including North American Truck of the Year. Now Ram is launching the world's torquiest pickup truck ever, the new 2019 Ram Heavy Duty. The burliest version packs 1,000 pound-feet of twist, but there's a lot more to this truck than its obscene amount of low-end grunt. It's also the quietest, most comfortable, and most refined heavy-duty pickup Ram has ever made.

Most power, payload and towing

The 2019 Ram Heavy Duty isn't exactly all-new. It's more of a major refresh, the HD's first since 2014 and the second since this generation debuted in 2010. The truck is now infused with much of the styling, technology and much of the interior of its light-duty little brother, the Ram 1500. Only the HD's cab, doors and bedsides are essentially unchanged, along with its 6.4-liter Hemi V8, which is now standard on all 2500 and 3500 models. The unpopular 5.7-liter Hemi is no longer available.

Ram continues to offer two versions of its Cummins inline six-cylinder diesel power on all models except the 2500 Power Wagon. The 6.7-liter Cummins Turbo Diesel, which costs an extra $9,100, and the High-Output version have both been reengineered for more power, more durability and significantly less noise.

Hemi models, including the Power Wagon, have been upgraded to an 8HP75R eight-speed from ZF and a dash-mounted rotary shifter. The Hemi's power ratings are unchanged at 410 hp and 429 lb-ft of torque, but the V8 now has a more advanced cylinder deactivation system for improved fuel economy and smoother operation when only four of its cylinders are firing. The eight-speed's gearing also betters the Power Wagon's crawl index from 35:1 to 51:1 for improved low-speed off-roading.

Most Ram HD buyers spring for the diesel. The most popular model is the 2500 4x4 Crew Cab Laramie with the Cummins, but trucks with the 6.4-liter and the new eight-speed feel considerably quicker on the road. Even the big boy 3500s.

Both versions of the Cummins get a new Compacted Graphite Iron block, which is lighter and 75 percent stronger. There's also a new cylinder head with an all-new valvetrain, lighter and stronger pistons, new bearings, a new exhaust manifold, a new quieter scissor gear drive and a new turbo for more flow. Max boost on the HO, which costs an extra $11,795, is now 33 psi.

Both engines are significantly smoother than before — they've lost most of their signature rattle. According to Rod Romain, the truck's chief engineer, the new block has natural sound-deadening characteristics, and a new hydraulic lifter lash adjustment system has eliminated the annoying tick-tick of the valves. More aluminum components have also dropped 60 pounds from the diesels, although at 1,060 pounds, they still outweigh the Hemi by 490 pounds. The overall noise reduction is remarkable. You'll no longer have to yell over the Cummins to order your burger and fries at the drive-thru. In fact, the Hemi, which retains its muscle-car growl, may now be the more audible option. Especially at full throttle, with the eight-speed snapping off tight gear changes just before its 5,800 rpm fuel cutoff.

Every new Ram HD also comes with standard acoustic glass and active noise cancellation, which is tied into the audio system. Ram says those technologies, along with the truck's 8 percent aerodynamic improvement and other factors, have made its cab 10 decibels quieter. And it is luxury-car quiet inside, even at 90 mph.

Ram's signature cross hatch grille is gone. There are six new grille designs spread across the Ram's many trim levels, and the family resemblance to the smaller Ram 1500 is hard to miss. The new grilles are 30 percent larger, and there are several available headlamp designs, including a full LED/projector with Adaptive Front-lighting System (AFS), which can swivel in the direction of travel up to 15 degrees.

The new look is a bit less trucky, but the pickup has lost none of its attitude or head-turning ability. Our Walnut Brown Metallic 3500 Laramie Longhorn Crew Cab 4x4 Long Box dropped a few jaws on the Vegas Strip.

A new aluminum hood saves 27 pounds, while the steel tailgate has been reshaped to improve aerodynamics and it can now be opened by remote, lowering itself slowly and silently in a controlled fall. Unfortunately, the multifunction tailgate shown on the Ram 1500 at the Chicago Auto Show will not be offered.

Now LED, even the HD's clearance lamps are new, reshaped with a lower, sleeker profile. Other aero tricks include grille shudders and a reworked rear bumper. "It's such a form follows function truck," says the HD's exterior designer Mike Gillam, who has also finally shed the truck of its old-school mast antenna. According to Ram, the HD's 0.409 drag coefficient is class leading.

More than 20 sensors and cameras are impressively integrated into the truck's exterior, including cameras hidden in its grille and tailgate. There's also a bed cam. A blind spot warning system, parking assist sensors, a 360-degree monitor, adaptive cruise control and automatic forward emergency braking, which integrates with your trailer's brakes, are all available.

Equally new is the HD's interior, which has been also been lifted from the Ram 1500, right down to its available 12-inch configurable touchscreen. The layout works just as well here as it does in the light-duty truck, and the materials and attention to detail are impressive.

Each trim gets its own look and feel, but our favorite is the Laramie Longhorn, with its real open-pore striped wood and gold trim on the dash, doors and gauges. It's so over-the-top that the Longhorn logo is hand-branded into the wood on the truck's upper glovebox door. Ram has reused the HD's seat frames, but they're reshaped with new padding, and comfort is improved. The HVAC system has also been dialed up for 30 percent more airflow, and there's a radical increase in interior storage, including a multilevel center console that can swallow a laptop with a 15-inch screen.

Due to the column shifter on the diesel models, Ram has also reused the HD's steering column, which tilts but does not telescope. The pedals do adjust, but not quite enough if you have long legs. As a result, the driving position isn't as comfortable as it is in the light-duty truck.

Ram offers three bodystyles, Regular Cab, Crew Cab and Mega Cab, which still offers best-in-class rear seat space and a reclining rear bench. Base prices start right around $35,000 for a 2500 two-wheel drive long-wheelbase Regular Cab Tradesman and climb to $68,745 for a 3500 4x4 Mega Cab Limited. Load up a Laramie Longhorn or a Limited with options, including Cummins diesel power, and you're looking at a $90,000 truck.

Stronger chassis and better ride is a great formula

Much of the Ram HD's newfound refinement results from its all-new boxed steel frame, which is about 30 pounds lighter but matches the stiffness of the previous design due to an increase in high-strength steel. A new front crossmember also adds strength while dialing out engine vibration, and new body mounts, including two Active-Tuned Mass Modules, isolate the cab.

According to Romain, the HD's retuned suspension with new bushings, spring rates and shocks has resulted in a 50 percent improvement in ride comfort. There's still some truck jiggle left in the ride if the bed is empty and the tires are pumped up to their max load pressures, but its lack of impact harshness is something to behold.

A new steering gear and linkage have improved on center feel and a retuned brake booster and pedal ratio have lightened brake pedal effort. Active Level rear air suspension, which replaces the rear coil springs with air bags, remains available on both 2500 and 3500 models, which also get new front and rear axles to handle the truck's increased power, payload and tow ratings. The HD's lack of noise and vibration is also seriously impressive. At idle, only a light buzz remains in the pedals of diesel models, and its towing stability is astonishing. Using the Ram's exhaust brake to control our downhill speed, we pulled a 25,000-pound load up and down a wet narrow two-lane with a 5 percent grade without breaking a sweat. The HO-equipped HD 3500 could not have made it easier.

Ram's Power Wagon also gets the new frame. However, its suspension, which includes Bilstein shocks, is unchanged. There are a few hardware tweaks to Ram's best off-roader, including a 360-degree camera with a forward view, and a new Warn Zeon-12 winch with a synthetic line that cannot kink and shaves 28 lbs. from the truck's nose. And its ramp index has climbed from 510 to 538. "The off-road guys will understand and appreciate that," says Morrison.

With about 30 percent market share, Ram consistently runs second to Ford in Heavy Duty pickup sales, while its HD trucks make up about 25 percent of its total sales volume. Maybe the new monster torque rating of the Cummins HO will change that.

It's an ongoing game of "my specs are bigger than yours," and we hope it never ends. In the meantime, we'll see if the Ram's newfound power, comfort, features and refinement drive sales in a market known for its extreme customer loyalty. 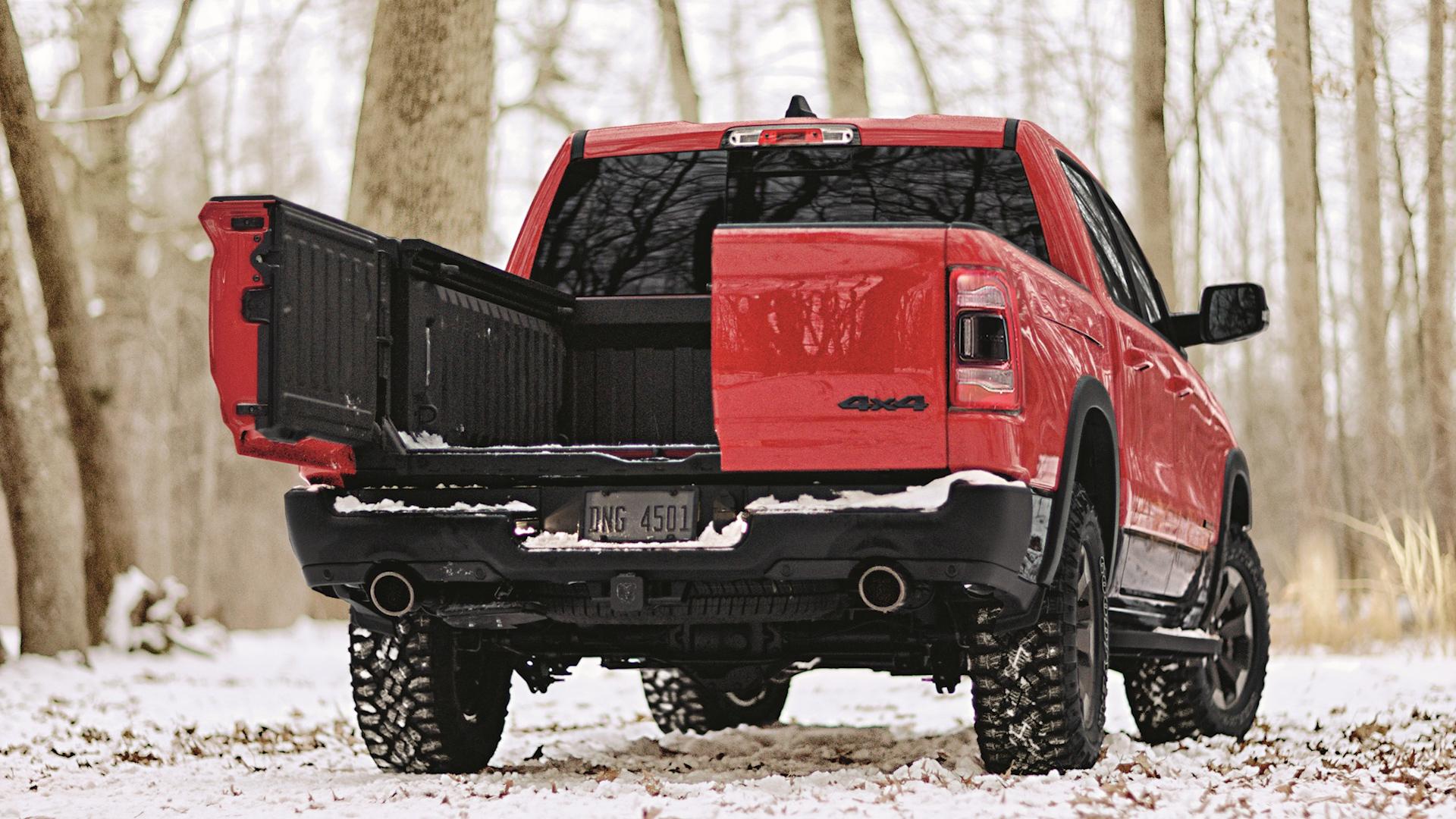 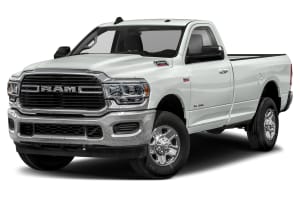