More Leaf to go around for all

View All Specs
Add a Review
SAN DIEGO — The 2019 Nissan Leaf Plus is one of those "ask and you shall receive" situations. The company has lagged behind in the range discussion for too long — the redesigned 2018 Leaf has only a 150-mile range, after all. This is plenty for some people, but the competition offers more. Nissan heard the cries, and now we have the Leaf Plus. Hallelujah, right?

Picking out a Leaf Plus from a group of normal Leafs is easiest if you're looking at it from behind. Nissan added a "Plus" badge to the bottom right-hand part of the hatch under the trim designation. Then if you're a true EV sleuth, the lower front bumper lip is painted in a contrasting blue as long as you didn't opt for the dark blue paint option. This looks good on some colors, but a bit disjointed on others. Choose wisely, we'll say.

Pop open the charge port cover and you'll notice an "e+" logo on the quick charging cap. You might have remembered that when Nissan revealed the big battery Leaf at CES earlier this year it was called the e+. That nomenclature is still around for folks outside America, but here Nissan thinks a car named "Plus" instead of "e+" will offer higher residual values. For what it's worth, the "e" was rather redundant anyways. The Leaf is obviously an electric car.

Semantics aside, the big changes for the Plus happen under the floor in the battery pack for increased range and faster charging. It has gone from a 40 kWh battery to a 62 kWh battery, providing a 226-mile range, according to its EPA rating. That's a 76-mile boost over the 150-mile range in the regular Leaf. This means we can finally compare the Leaf to vehicles like the Chevrolet Bolt, Hyundai Kona Electric and others without a huge asterisk mark. 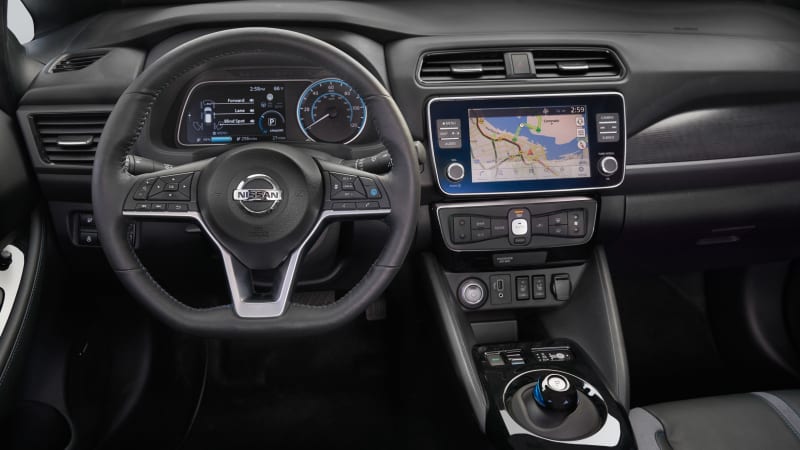 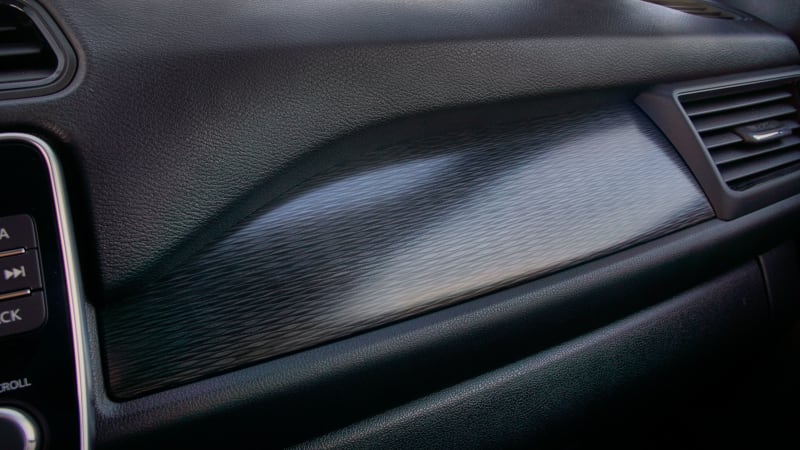 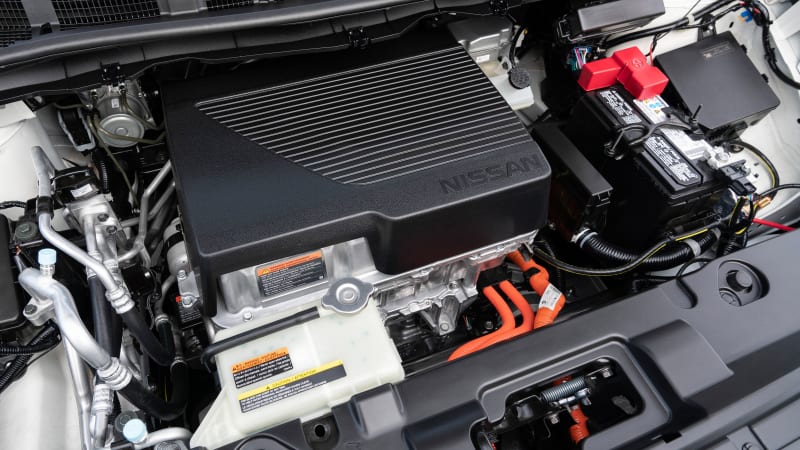 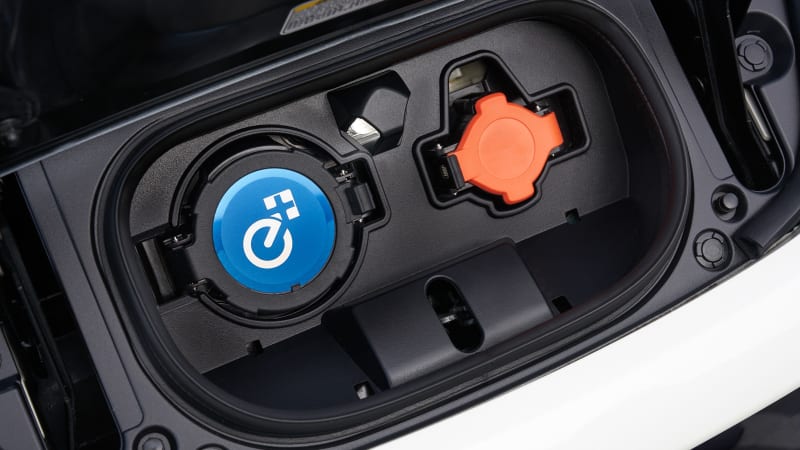 The Leaf Plus's "bigger" battery pack is 1.57 inches taller, but this doesn't change the interior or exterior dimensions save a negligible ride height increase. Engineers told us the pack is much more energy dense, with more tightly-packed cells than before. Nissan did a similar thing when transitioning from the 30 kWh pack to the 40 kWh pack, but this 62 kWh pack is even denser.

With a larger battery to charge, Nissan improved the quick charging rate to 100 kW DC, and so in ideal conditions the Leaf Plus can achieve 80 percent charge after 45 minutes, packing in 60 more miles of charge in the same amount of time than its slower-charging counterpart.

That's progress, but it still doesn't address the battery cooling issue. While many new electrics are equipped with liquid-cooled battery packs, the Leaf continues to make do with air cooling. Nissan told us "liquid cooling is a solution, but it's not the only solution." Air-cooling is lighter and cheaper than liquid cooling, but the tradeoff is reduced performance in extreme ambient temperatures and some issues with fast-charging speeds. The Leaf cuts charge speed as heat builds, so on a long trip with multiple fast-charging stops it may take longer and longer to top up — a feature, not a bug, but an inconvenience for some owners that has led to some controversy for Nissan. To help keep temperatures in check on its updated battery pack, Nissan employed different wiring and battery chemistry. None of the testing we were able to do on the first drive in sunny San Diego can tell us if there are any tangible improvements, but know that changes have been made. 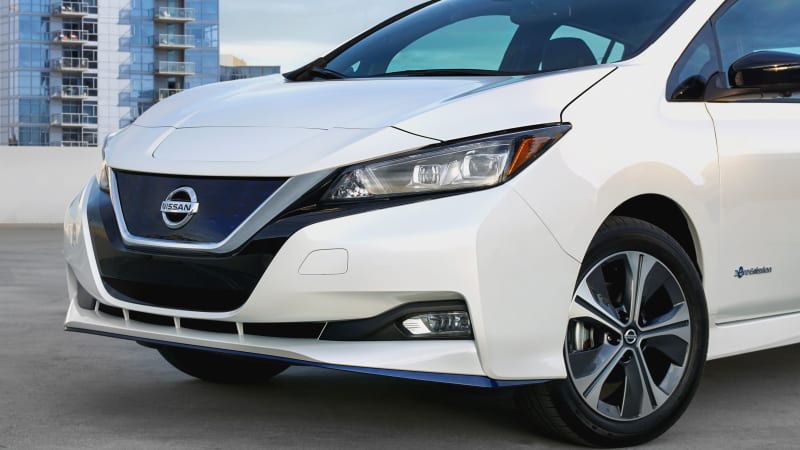 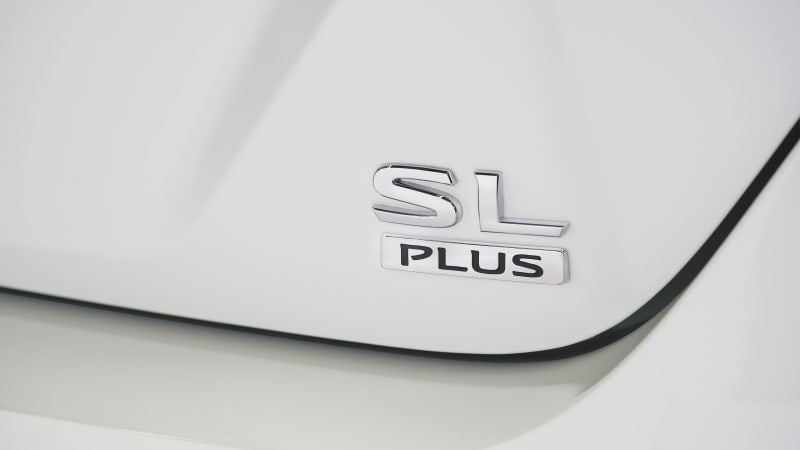 This extra power makes itself known once you're already moving at a decent clip. Mat the throttle when you're traveling along at city speeds and the Leaf Plus jumps ahead instantly, as you'd expect from a torquey electric car. Do the same from a dead stop and things feel rather lifeless. We wouldn't call it slow, but there just isn't any electric verve to acceleration from a stop. Even with traction control turned off, the front tires won't break loose if it's pointed in a straight line. It's a bit of a shame, because the ridiculous torque surge right off the line has always been the hilariously fun part of driving an electric car.

Either Nissan has fettled with the tuning to keep things in check at low speeds, or the permanent magnet motor just isn't responsive enough from the get-go. Induction motors are inherently sportier to drive, but that's an unnecessary requirement for the budget Leaf, which makes do with the cheaper, more efficient permanent magnet unit. Weight could play a factor here, too. The Leaf Plus is just over 340 pounds heavier than the normal Leaf in every trim level — that's no small gain when it comes to a vehicle's dynamics. Both versions of the Leaf have the same final drive ratio of 8.193: 1, leading us to believe the culprit isn't to be found there. The lazy start is quite possibly a factor of some or all the elements we listed above.

Besides a much-welcome boost in acceleration in most circumstances, driving the Leaf Plus is a whole lot like driving the normal Leaf, with added peace of mind in electric range. It just bumps your head off the headrest a little harder when you give it everything it has. Comfort, like we've noted in previous reviews, continues to be a strong selling point for the Leaf Plus. Bumps are soaked up well for the small size and economy car nature of the Leaf. The cabin was impressively quiet with a hair of wind and tire noise being the only intruding sounds. There really isn't much to complain about on this front for what you'll be paying (still unannounced) for the Leaf Plus.

Handling is average if not slightly uninspiring. The chassis feels solid with a low center of gravity, but the steering's numbness and the high-up driving position limit any potential for fun. Even with the seat adjusted as close to the floor as possible it still felt like we were sitting too high up. All in, you'll have a little bit of fun driving the Leaf Plus on a winding road, but not more than that. 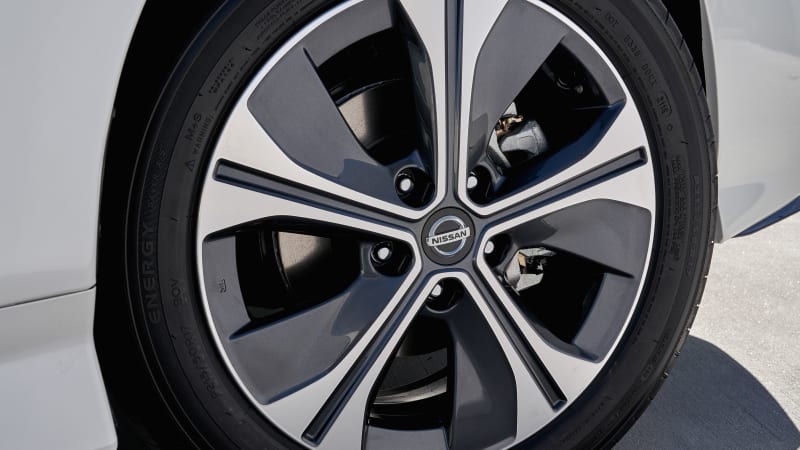 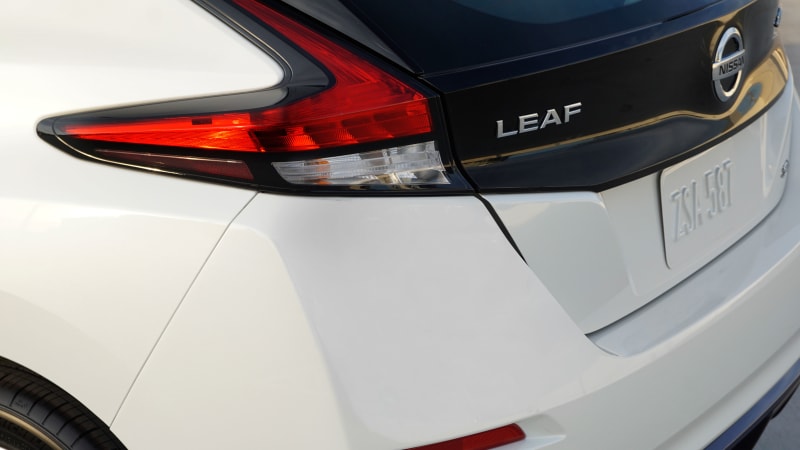 We spent a lot of time driving through the city and in stop-and-go traffic, where most Leaf owners will probably be. The E-Pedal function (Nissan's name for its one-pedal regenerative braking mode) can be used to bring the Leaf Plus to a stop in nearly every circumstance. Nissan says it's changed the tuning a bit for the Plus to offer even greater stopping power through the regenerative braking — this means the mechanical brakes will be used even less. Unless someone makes an unexpected move, you might never have to touch the brake pedal throughout your entire commute. Traditional two-pedal driving is available at the press of a button, but once you get used to one-pedal operation, you're not going to want to switch back.

Nissan switched to an eight-inch infotainment screen for the 2019 model year, replacing the seven-inch unit previously housed in the center stack. It has updated software, but still feels dated for a new 2019 system. A slick new appearance and graphics package could make a huge difference. As it is, we imagine most folks will probably just want to use the Apple CarPlay or Android Auto that comes standard.

The Leaf Plus' success will have a lot to do with price and whether Nissan is able to undercut competitors like the Bolt and Hyundai's/ Kia's trio of electric cars either coming to market or for sale now. Globally the Leaf has sold well. When it comes to the U.S., a Nissan representative said, "you could say we're hanging in there." While a brand-new Leaf Plus won't be a bargain compared to gasoline powered cars its size, Nissan is hoping more miles per charge ends up meaning more sales.

Whether folks actually require the extra 76 miles is an entirely different argument. Regardless of real driving needs, the optics look a lot better for the Leaf with range in the 200s rather than the 100s — and a perkier electric motor is a big plus. If you liked the Leaf before, you're sure to like the Leaf Plus even more — Nissan is planning to sell them both side-by-side for the foreseeable future at different price points.

Unfortunately, we can't tell you what the Leaf Plus will run you, because Nissan isn't willing to part ways with that information quite yet. You're still in the safe zone to get the full $7,500 federal tax credit when buying a Nissan for the near future. We were told that approximately 130,000 Leafs have been sold in the U.S. thus far, leaving room for another 70,000 before the full credit disappears. Once the price for the big-battery Leaf is announced (it's expected to be priced in line with the competition) we'll return to this discussion with an update.

For now, this cheap and cheerful electric appliance gets more appealing with competitive range and a little more power. A "hallelujah" moment? Not exactly. Let's call it a medium-sized step in the right direction. That's more like it. 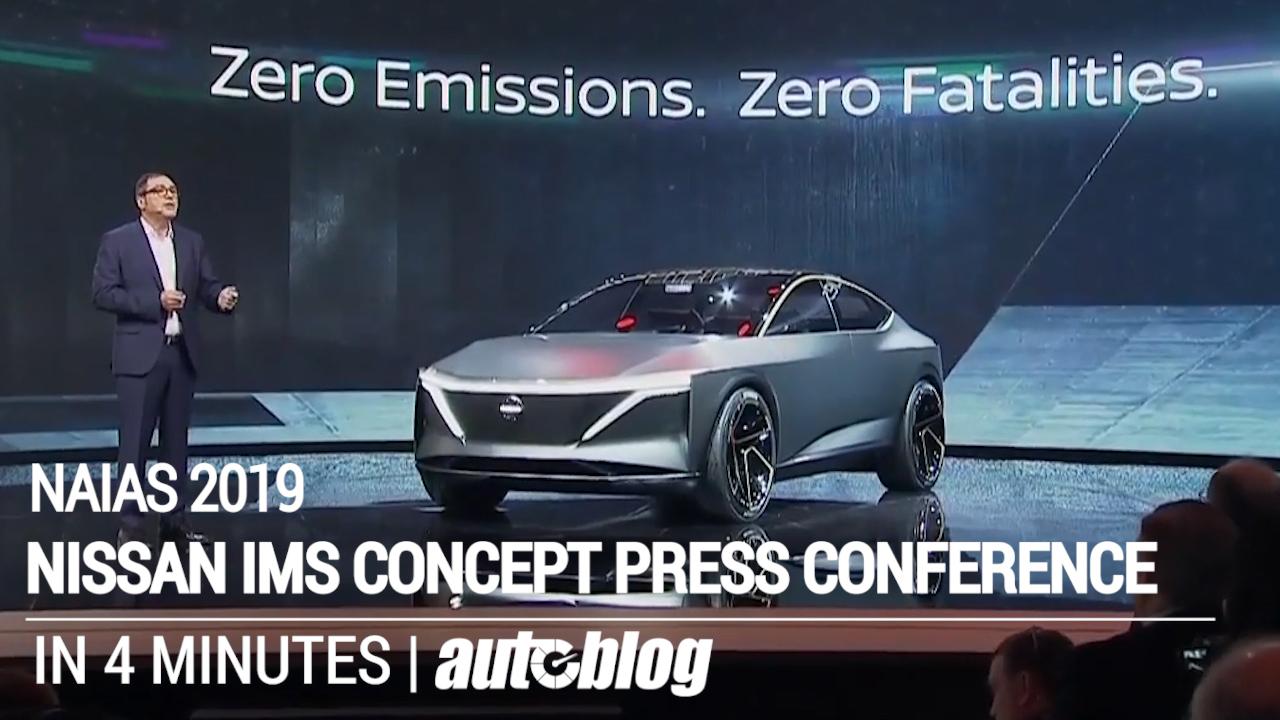