Guess when this car will plunge through the ice, win $1,500

In Michigan's U.P., a Rotary Club takes bets on when this car will fall through the ice

Joe Lorio
In Michigan's Upper Peninsula, a sad-sack Saturn raises money for charity while awaiting an icy fate. The 1998 Saturn is a bright orange beacon inviting folks to make a bet on the coming of spring. When the weather warms up enough and this Saturn sinks, someone is going to take home $1,500. It's the Iron Mountain–Kingsford Rotary Club's annual car-plunge contest, a fundraiser that takes bets on when this car will fall through the ice.

The contest had been run in years past and was resurrected in 2015. In the old days, the hapless cars sank to the bottom of the lake, which is actually a flooded old iron mine. In today's more enlightened environmental era, this Saturn is attached to a cable affixed to an anchor on shore, allowing it to be yanked out of the water. It also has been drained of all fluids, degreased, and had its powertrain, battery, and radiator removed (which means it weighs about 1,800 pounds). 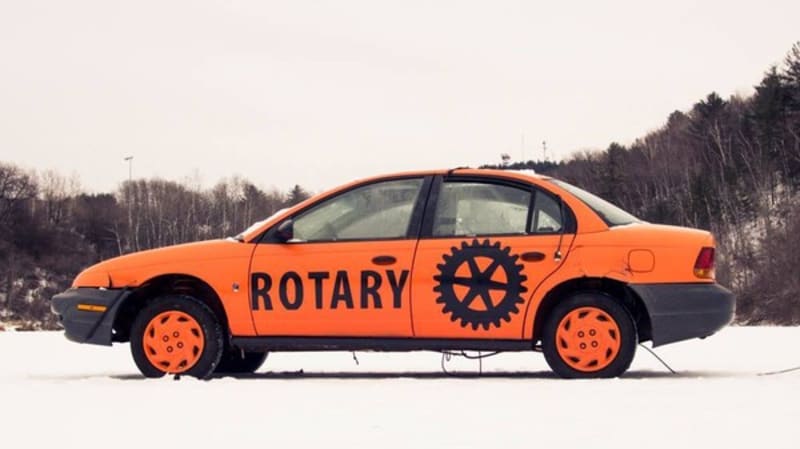 The lake sits alongside a main highway, assuring maximum visibility for the car and the contest. But it's not only locals who are invited to take a chance; anyone 18 and over can bet via this online link. Ten dollars buys three chances. Whoever most closely guesses the date and time that the Saturn slips under the waves takes home $1,500. Betting closes March 15. The past four years have seen the car fall through on March 17, April 2, April 4, and April 26 — although, as they say, past performance is no guarantee of future returns. And remember: Bet with your head, not over it.