Driving this classic SUV for the first time, I have only one thought: This thing is a death trap. At 50 miles per hour, this 1962 Jeep Willys Wagon is all over the road, changing direction seemingly on its own. It feels like the next good jolt to the suspension, or a stiff wind off the Pacific, will send the Willys down the dunes and into the crashing surf. At least the lap belt I'm wearing will keep my lower half in place as my face slams into the Jeep's enormous steering wheel and flat windshield.

Then I remembered the phone conversation with Scott Brown, Jeep's west coast PR guy. "Make sure the front sway bar is connected when you drive the Willys on the street," he said. "I don't want you to kill yourself." I park and climb from the cab to twist the big black knob just ahead of the Jeep's right front tire, reconnecting its aftermarket Teraflex Quick Disconnect front sway bar. Fixed.

Thank you Mr. Brown. With the sway bar hooked up, this floppy Jeep – 7 feet high but only 5 feet wide – is no longer worthy of death trap status. 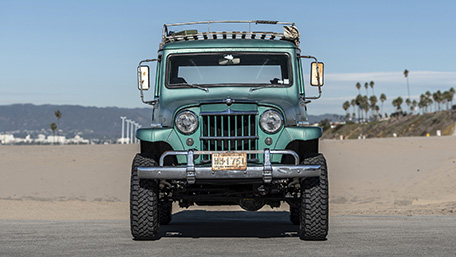 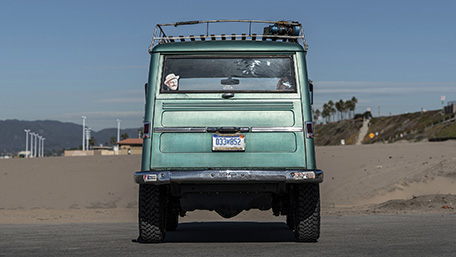 "The Willy's Wagon is credited as being the first commercial SUV," says Mark Allen, head of Jeep Design. "They weren't trying to make an SUV. They were just trying to make a station wagon. It was marketed as the first all steel station wagon, funnily enough. But when they added four-wheel drive to it, that became really the first of what we know of as the SUV that's going on today." The model was introduced in 1946 and was produced until Jeep replaced it in 1965 with the Wagoneer, a nameplate it will reintroduce on a new full-size SUV next year.

This old Willys is Allen's baby. Its creation kicked off the brand's "Underground" concepts program, which is still going strong today. It was shown publicly for the first time at the 2012 Easter Jeep Safari in Moab along with a handful other special builds both new and old. It's been to Moab several times and you can see it climbing Utah's famous rocks on YouTube, its front sway bar disconnected of course. There's still Moab mud caked inside the Willys' chrome bumpers and up inside the suspension.

This year, in the course of showing off the new Gladiator, Jeep is bringing out some of its old pickups to the Safari. "A lot of people forgot that we made trucks," says Allen. "So we're going to remind them of that. But it all stems from that green Willys, that was the first time we'd taken an old car out there." 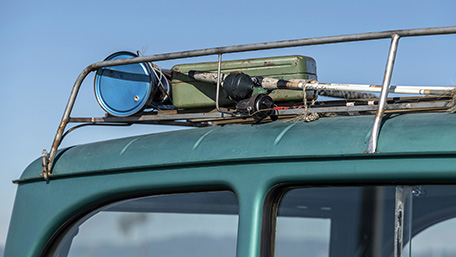 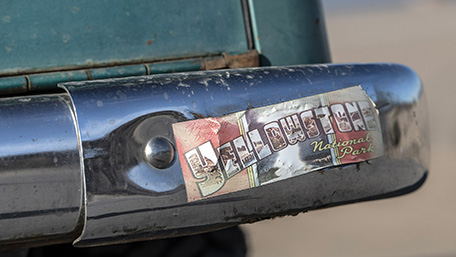 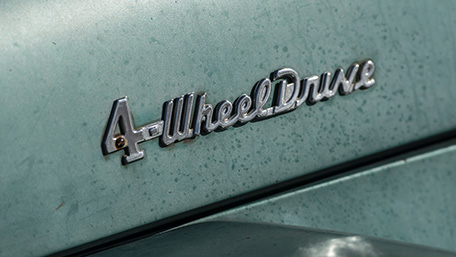 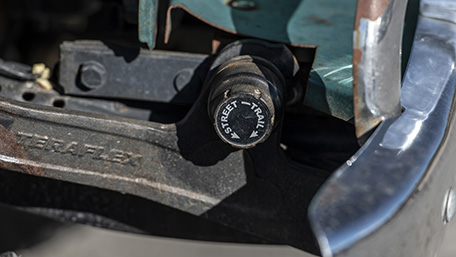 The truck was a buyback when the company was still AMC. Jeep has owned it for about 40 years. It ended up in the proverbial dark dank warehouse with a bunch of other cool old Jeeps no one was paying any attention to, like Alaskan Postal Jeeps, when a group out of Mopar got their hands on it.

"Thankfully they ran out of funding when they were getting ready to strip the paint off," says Allen. "That's when I grabbed the vehicle. I was horrified they were going to paint it. We love the paint job that's on it and we went about preserving what was there." The Reno Airport and NRA decals are authentic, dating back to the original owner, while Allen and the crew added the roof rack and the other pieces of kitsch and whimsy, including local flea market finds like the tackle box and fishing pole fixed to the roof and the Hulk Hogan button on the metal dash. Someone even bolted a rusty 1962 Michigan license plate to the front bumper.

It looks stock. Like an aged original. And it is, on top and on the inside. But the Willys is actually a restomod. Underneath is a 2004 Wrangler Unlimited Rubicon chassis and powertrain, including its 5-speed manual transmission. "It just fits so well," says Allen of the conversion. "The wheelbase difference between the TJ Unlimited and the stock Willys Wagon was a little more than half an inch. I dare you to find it. And now it has the 4.0 liter inline six in it, which is about a 90 horsepower bump over the original flathead six." 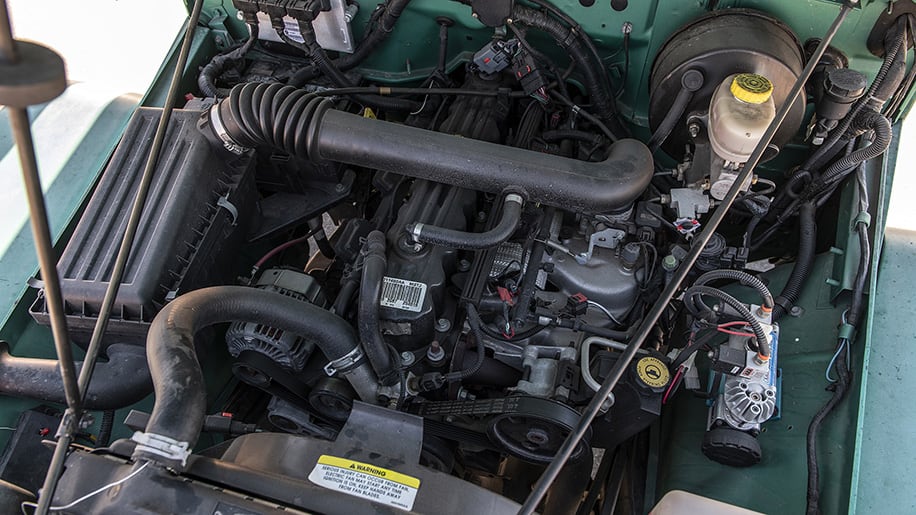 "Did you find the ARB air locker switches behind the Olympia Beer belt buckle?," Allen asked. "We wanted to hide the modern stuff."

It's those details that make the truck, along with its untouched interior. The shifter, springy green bench seats and 16-inch diameter thin plastic steering wheel are original. The floor is bare metal with aged wood slats and everything besides the steering and brakes (with ABS) is manual. The lever underneath the dash opens a cowl vent for some ventilation. Forget the wipers or the original AM radio. They don't work.

"It needed to look old but drive more modern," says Allen. "If you're driving an authentic '62 Willys Wagon you'd be frightened in modern traffic. The brakes aren't up to it, the steering isn't up to it ,and the power is just not there. But we modernized it enough that you can easily drive around it in."

With 235 pound-feet of torque, the Jeep's inline six is perfect for this application and the 5-speed is shifted with just a flick of your wrist. Gearing is short, so there's more than enough acceleration to keep up with modern traffic and the ride is soft and comfortable as the factory dampers and the 7-inch tall sidewalls of its modern Falken Wildpeak M/T tires (235/85R16) soak up the road. 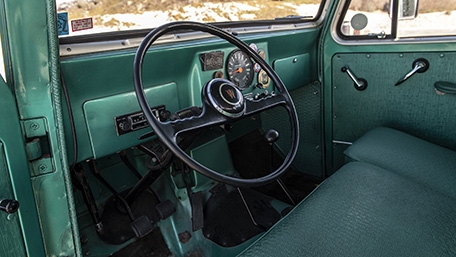 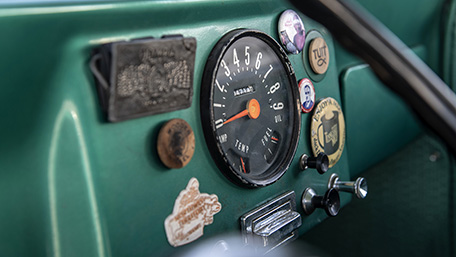 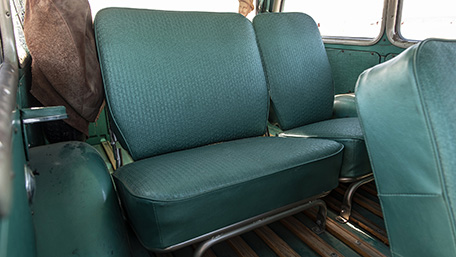 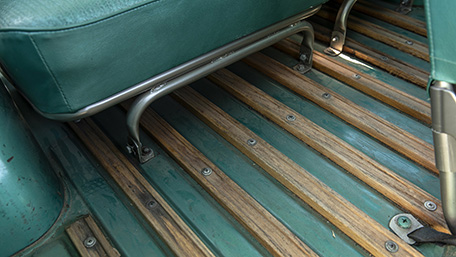 There's considerable lean in the corners, however, which is unnerving at first, but your confidence grows with seat time. There isn't any slop in the steering and it stops as well as a 2004 Wrangler Unlimited. Once you begin to trust it and relax your hands on that big old steering wheel the Willy's is fun to drive around town. I even packed my family in the classic and went Christmas tree shopping, hauling home an 11-foot Douglas Fir strapped to its roof rack.

My eyes often scan the dash for a tachometer that isn't there, and the speedo, which is mounted above the shifter, is marked in single digits. The Willys is happiest with the instrument's needle pointing between 4 and 6. Above 60 mph the classic feels like its being pushed harder than it wants to be. On LA.'s freeways the Jeep just isn't in its element.

Since the creation of the Willys Wagon, Allen has built one for himself, putting a 1956 Jeep Pickup, which has the same nose and doors as the Wagon, on a TJ chassis. "We just use it as a pickup truck," he says. And in his spare time he's been designing a gaggle of new Jeep SUVs. Last year the brand announced that by 2022, its expanded line up will include the new Grand Commander, a new Grand Cherokee, the Wagoneer, Grand Wagoneer and others. Also promised are 10 plug in hybrid and four BEV versions of the SUVs.

But does that warehouse full of cool old Jeeps still exist? "I've already told you too much," he says with a laugh. "Honestly, I think we've pulled out all the really good ones."