But is there an acceleration difference, too? How to tell the twins apart

Update: We've changed some of the figures on the BMW Z4 M40i based on updates from BMW.

Now that the 2020 Toyota Supra has been revealed, it's time to let the inevitable comparisons begin. Number one on that list of comparisons has to be its sister vehicle: the BMW Z4. During the lead-up to this reveal, and most likely throughout its entire lifetime, talk of this relationship has and will continue to dominate conversation around it. We don't know every last spec and measurement for both these cars yet, but we know enough for a proper comparison on paper now. 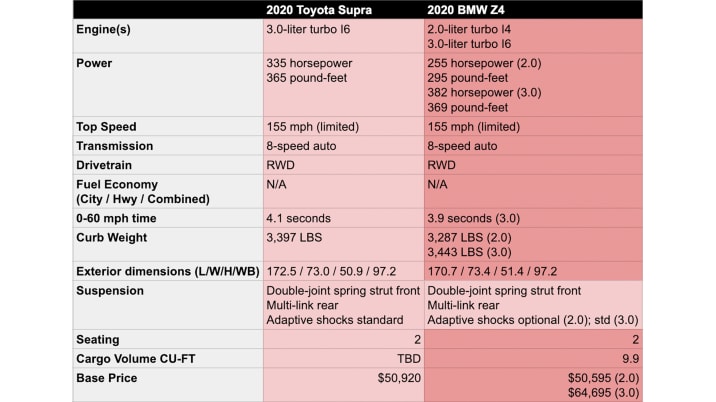 While the Z4 is available with a less-powerful turbocharged inline-four, the two cars' inline-six engines are extremely similar — both are 3.0 liters and offer more than 300 horsepower. However, the BMW version of this BMW engine makes 382 horsepower, while the Toyota-tuned version produces only 335 horses. We'll be asking Toyota exactly why this almost 50 horsepower gap exists between the two cars, but the BMW takes the cake here in all-out power. You'll have to pony up for the M40i though, because the Z4 comes standard with the less powerful four-cylinder. Despite weighing more, the Z4 M40i is slightly quicker to 60 mph.


Both cars sport eight-speed automatic transmissions as the only option (wipes tear) and rear-wheel drive. Top speed is limited to 155 mph in both. The Mk. IV Supra was limited to the same number, though Toyota hinted it could top 180 mph. We'd be curious to know what the new one is capable of with the governor removed. Fuel economy isn't out for either car for the time being, but we'd wager it'll be pretty similar between the two. Here are where the similarities really come into focus. Even without throwing both onto a lift and looking, it's clear the hard points are identical in both these cars. Up front, both have a double-joint spring strut design, and the rear has a multi-link setup. Toyota makes adaptive shocks standard, whereas BMW only makes it standard if you get the I6.

Wheelbase is identical to the tenth of an inch. Both measure in at 97.2 inches. Track width in front and back are identical in the Z4 M40i and Supra, too. The Supra measures in a couple inches longer than the Z4, but the width and height difference will be nearly impossible to tell to the naked eye. Cue the "BMW Supra" jokes.

Toyota is slapping a $50,920 starting price on the Supra, while the Z4 with the equivalent I6 starts at $64,695. That's a sizable difference for the more luxurious BMW, but we still aren't overlooking the rather high price for the Toyota, too. Just upon visual inspection, the BMW has better materials on the interior. There's plenty of metal trim visible where the Supra uses black plastic instead. The BMW comes standard with a 10.25-inch center screen, but the Supra only has a 6.5-inch display. An 8.8-inch one gets tacked onto the more expensive Supra. Another BMW exclusive is its trick backup assistant that will automatically back the car up 150 feet from where you last parked the car. So it's not a whole lot, but the BMW does offer a more premium experience for its price.

On top of this, BMW always lets folks option its cars up to the gills, and Toyota is offering a Premium grade and Launch Edition at the start itself. Even with the special Launch Edition, the Supra is still less, though, at $56,180. The four-cylinder Z4 is the Supra's price equivalent right now, each starting at just over $50,000. We'll have to get our hands on both of them to see if the convertible or the coupe offers the best bang for your performance buck.