It's rare when we get the opportunity to evaluate multiple versions of the same make and model in proximity of each other — at least away from a manufacturer-sponsored event. So, when we got the chance to test the 2019 Genesis G70 in back-to-back weeks in different guises, Senior Editor Alex Kierstein and contributing editor James Riswick happily accepted the chance to compare, contrast and make the same sort of observations actual car buyers might make when trying to decide between one variation and another.

In basic terms, it pitted a V6 with an eight-speed automatic against a turbocharged inline-four sporting a six-speed manual. However, there's more than just powertrain to consider with the G70, as like other sport sedans, there are a variety of enhancements that change the way it handles, rides and sounds.
We started with a 3.3T Dynamic Edition painted a vibrant Havana Red with diamond-quilted black leather and red stitching. As the name implies, it has a turbocharged 3.3-liter V6, good for 365 horsepower and 376 pound-feet of torque, and is only paired with an eight-speed automatic transmission.

All-wheel drive is an option, but our car only utilized the wheels out back. A limited-slip differential is standard with the V6, however, along with variable ratio steering. The standard sport-tuned suspension also gets upgraded to electronically controlled adaptive dampers in the Sport trim level. The only difference between that trim and the Dynamic Edition (limited to 400 units) is further upgraded Brembo brakes and Michelin Pilot Sport tires.

The 2.0T loses the variable gear ratio on its electric power steering (still rack-mounted), and you can't get the fancy dampers, but is otherwise available with the same feature content as the 3.3T. Well, unless you opt for the six-speed manual transmission fitted to our test car and only available with the 2.0-liter turbocharged four-cylinder that produces 252 hp and 260 lb-ft of torque. Whereas the eight-speed automatic can be paired to all-wheel drive and various trim levels (dubbed "packages" by Genesis in a matter of semantics), the manual is rear-drive only and available with a single package/trim level that basically adds a few choice extras to a standard car, such as 19-inch wheels, Brembo brakes, limited-slip, LED headlights, heated/ventilated seats and the superb Lexicon stereo.

It's also leatherette or nothing with the manual. No leather, no fancy diamond quilting. And as for forward collision mitigation or adaptive cruise control, Genesis apparently didn't think it was worth engineering the manual to work with automated braking tech. 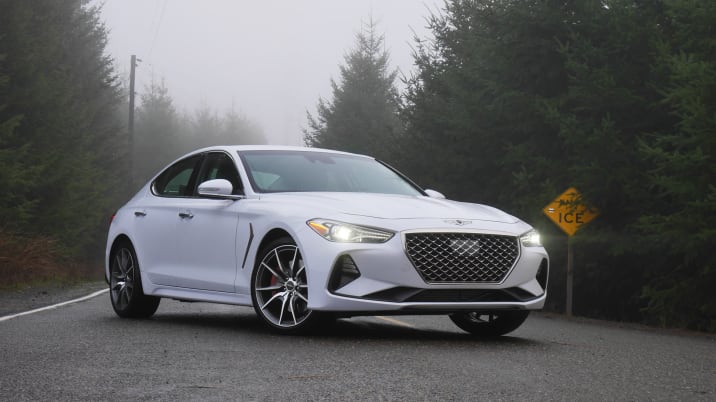 Contributing Editor James Riswick: I'm a "Save the Manuals" kind of guy. I understand why they're disappearing, but that doesn't mean I have to like it. So when a new car bucks the trend, I take note, especially when it's a performance-oriented car like the G70. And double especially since I longed for a manual transmission during my road trip in the Kia Stinger, a car that shares its rear-drive platform with the G70.

So, in a way, this is a case of beggars can't be choosers. I enjoyed driving the 2.0T with the manual — the clutch was easy to modulate, the throttle placement and calibration made the car easy to heal-toe downshift, and the shifter slides into each gear with a slight notchiness that's awfully familiar to BMW manuals. It lacks the rubbery-ness, however, and instead moves with the vaguely toy-like effort indicative of a Honda manual. I liked it fine, I know it didn't meet Alex's exacting standards, but I'd definitely check its box on the order sheet ... if it could be paired with the V6.

You see, the 2.0T is a perfectly capable engine with perfectly competitive output and acceleration. Unfortunately, the noises it makes are too far on the hot hatch spectrum, with a growly sort of character that evokes a Ford Focus ST more than an Audi A4 or BMW 330i. It seems out of place in the otherwise sophisticated G70, and especially when compared to the silky turbo V6, which is the other problem. It's really hard for any driving enthusiast to leave a bigger engine on the table, let alone one that brings an extra 113 horsepower. What's the point of offering the manual, presumably for car enthusiasts, but not with the engine most appealing to them? 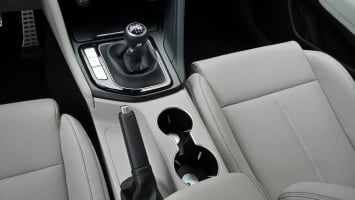 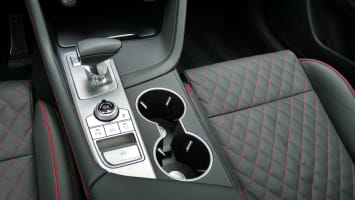 There's also the matter of the V6's available adaptive suspension dampers, which produce a superior ride. Without them, the 2.0T is firmer and more in keeping with traditional sport sedans, even if ultimately better-sorted and less prone to impact harshness than the sport-tuned versions of many competitors (the Mercedes C-Class comes to mind). I'd be perfectly happy with the standard suspension had I not driven the adaptive variety, but I did, so I'd want that.

Especially since it also improves the already superlative handling, thanks to its ability to firm up those dampers to mitigate what little body roll there otherwise is. Really, the G70 is as great to drive as you've likely already read: the steering, balance, seat-of-the-pants feel ... everything feels right. It also has a polish that past BMW fighters like the Infiniti G and Cadillac ATS did not. That's the case with either version. I started to ponder if I preferred driving any of the G70 3.3T's competitors, and I'm not sure I do.

As for the rest of the package, I'm impressed that Genesis managed to shoehorn in the manual transmission and a proper hand brake without compromising the surprisingly functional center console. The driving position is also sensational, with ample seat travel and a steering wheel that telescopes further than the Mauna Kea observatory. It's another area where BMW owners past and present might feel right at home. (Gee, you'd think the car's chief engineer logged a few decades in Bavaria or something).

Then there's the matter of that black nappa leather in the 3.3T Sport. It's gorgeous, feels great, and the red diamond-quilted stitching isn't over-the-top. The 2.0T manual with plain-Jane beige leatherette had a tough act to follow, and that goes for more than just interior upholstery choice. Though I'd really want the white car's transmission, I wish it was in the red car. 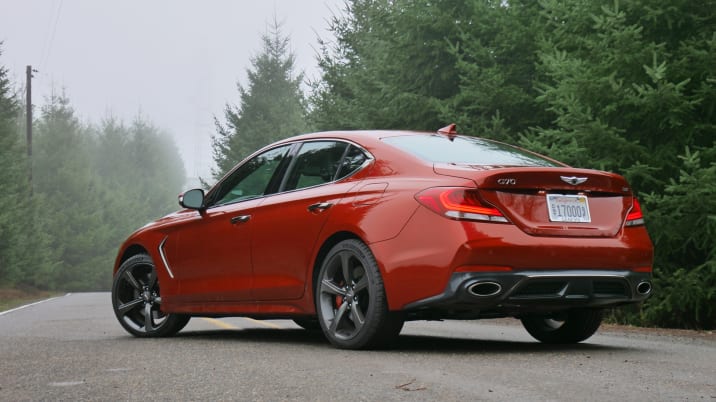 Senior Editor Alex Kierstein: I'm largely in agreement with James here, but let me use this opportunity to stress that the V6 is a superb engine. Thrust is ample, linear, and you get a lot of it right off the bat. It doesn't have a strong turbocharged feel to it, but it also doesn't feel like a V6 masquerading as a V8 — it feels more like an exceptionally burly V6. The raw numbers — a 0-60 time of a few ticks under 5 seconds, 365 hp and 376 lb-ft of torque — don't really tell the full story of the aggression unleashed when you mat the throttle. The 3.3T hauls ass.

And the 2.0T doesn't. That's the first strike against it. Simply experiencing the 3.3T prejudices you against the smaller, slower engine. It's just human enthusiast nature. It took a lot of patience and seat time for the distinct character of the junior G70 to shine through. At this point, the G70 compares favorably to a lot of other 2.0-liter, turbocharged, sporty sedans, in particular, the Lexus IS 300, Cadillac ATS, and the BMW 330i. For one, it has an available manual — yes, that it has one at all elevates it somewhat. It's also, in the right color, stunning in person. The white 2.0T didn't stand out, but paint it a color like Adriatic Blue or the Havana Red that our 3.3T was painted in, and you'll have strangers walking up and asking what it is. It does look European, perhaps Italian, more than it looks Korean, which was presumably very intentional.

The G70 2.0T reminded me a lot of the Alfa Romeo Giulia 2.0T. The Genesis is a bit short on power, but I truly believe it's comparable in terms of style and quality. The cheap bits of the Giulia pop out at you after some seat time, but the G70 only breaks the spell if you spot that the infotainment interface is shared with even lowly rental-spec Hyundai Elantras ... a reskinning of the interface would go a long way here. 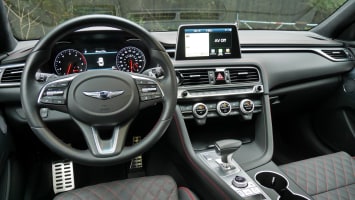 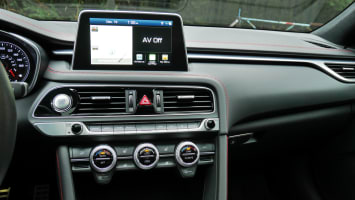 It's close to blasphemy, but unlike James, I felt the manual was a bit of a distraction. I recognize the subjectivity of this, but it wasn't pleasing to use. The throws were ropey and long, and it felt much like the cable-linkage shifters in various front-drive cars of the mid-1990s — accurate, but vague, like a simulation of a shift rather than the snick snick mechanical-ness of rowing a box without a linkage in the way. The clutch, too, engaged up high with a goofy "cam" feel close to the engagement point, as if the spring tension on the pedal was suddenly released. The whole thing felt awkward to the point of distraction. If a manual is not pleasurable to use, what's the point?

Furthermore, as James mentioned, you can't have the manual with the 3.3T, and the eight-speed automatic is fantastic. World class. I'd love a slightly quicker response from the paddle shifters, but letting the transmission shift itself isn't a problem.

I'll also posit that the 2.0T itself isn't a very rewarding engine. That said, the car around it feels high-quality and a convincing near-luxury, sporty vehicle. Things get better in higher specs. As James said, the diamond-quilted leather exemplifies the overall interior experience. It looks nice, it feels nice, it helps sell the experience.

This is one of the first products with a Genesis badge attached that didn't feel like a Hyundai wearing a tuxedo. Genesis comes into its own with the G70, just like Kia is really finding its own identity with the G70's platform-mate, the Stinger. If you're in the market for something in this segment — even if you're really going to buy something else — stop into a Genesis dealer and sit inside one with the nappa leather. Even better, drive it. If you do both, you'll quickly get a sense of where Genesis is at. If we didn't, as a society, have such a singular focus on crossovers and SUVs, this car might be a breakout moment for the automaker. Oh well. 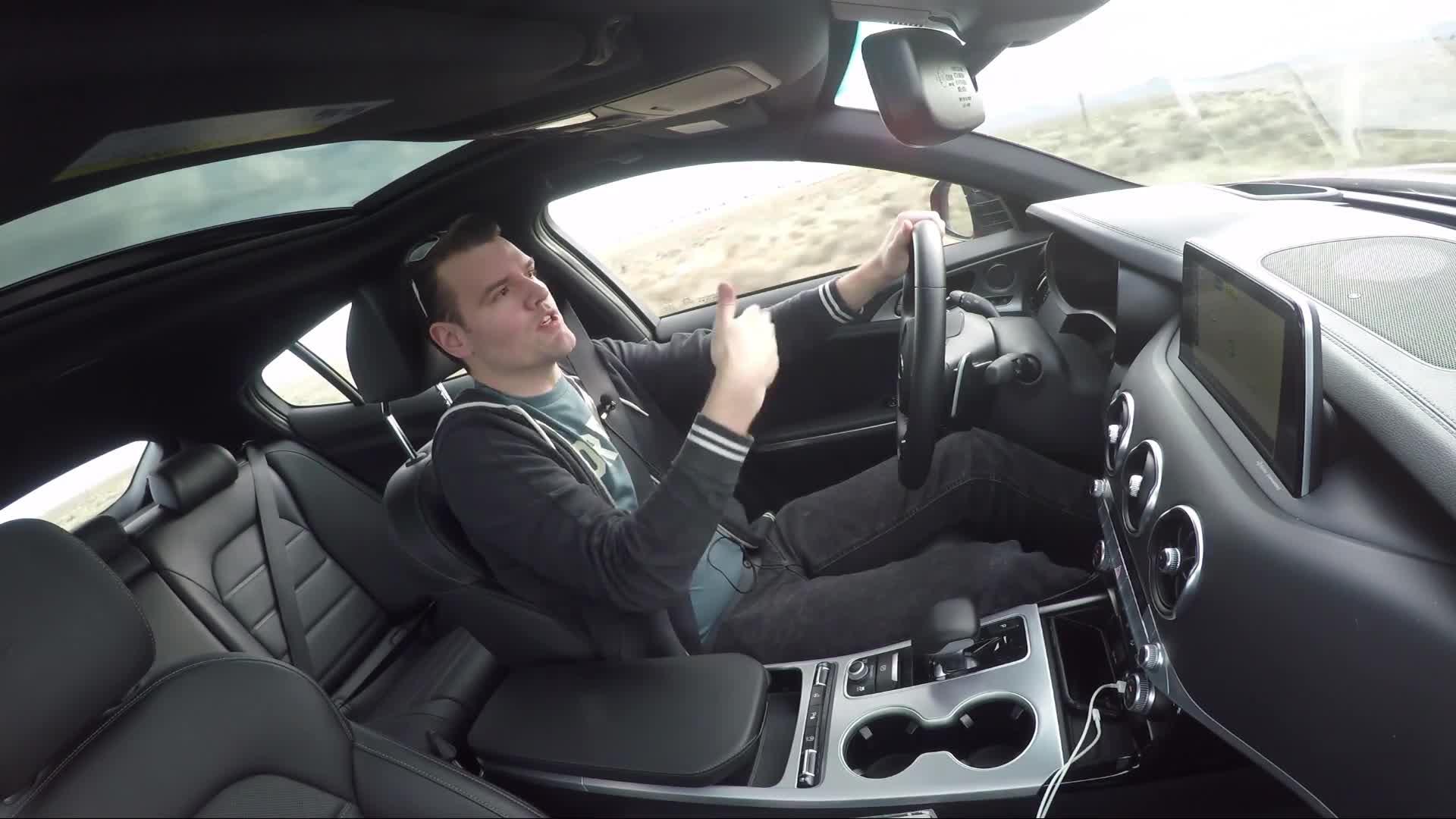 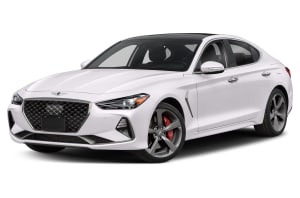