The Volkswagen Group's main shareholders are giving British ultraluxury division Bentley an ultimatum to turn around its finances and start earning a profit. The Piech and Porsche families did not say what would happen if the brand fails to return to the black, but they said it should happen within two years.

"The important thing is for every (VW Group) brand to generate a reasonable contribution again," Wolfgang Porsche told the subscription-only Frankfurter Allgemeine Zeitung, as relayed by Automotive News. "That is not currently the case at Bentley, and we are not satisfied."

Volkswagen Group has not yet issued its report for full-year 2018, but Bentley had lost the equivalent of $157 million through the first nine months on an 11 percent decline in sales. In 2017, Bentley sold 10,566 vehicles globally, with revenue down 9.2 percent from 2016. VW Group apparently cites the slow rollout of the Continental GT and the British pound's lower value amid Brexit talks, which makes the many parts it sources from continental Europe more expensive, as among the reasons.

A German study last summer claimed that Bentley lost a little more than $19,000 on each car.

Adrian Hallmark started as CEO in February 2018 after heading global brand strategy for Jaguar. Bentley in 2018 released the all-new 2019 Continental GT after a nine-month delay, and it revealed the GTC convertible version in Los Angeles. Hallmark has said 2019 "is a conversion year to a better business model" after a year plagued by problems that also included European WLTP certification.

He announced last year the luxury brand would no longer build new sports cars, though the brand says it's still committed to the idea of the two-door GT. Bentley has also said it wants electrified versions of all its models by 2025, which will be an expensive proposition and will likely including plug-in hybrid versions of current models. 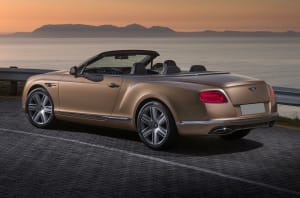