It has built 100 examples of the M-Byte, says it goes on sale this year

Gary S. Vasilash
It's not often that an automotive CEO emphasizes in a press event that the vehicle he's talking about is "real," but given that the company in question, Byton, plans to launch its first electric vehicle later this year, a crossover named the M-Byte, from its factory in Nanjing, China (a plant that doesn't yet have its manufacturing permit from the Chinese government), and given he's talking from a stage at the 2019 CES, perhaps the assurance that this isn't four-wheel vaporware is understandable.

What's more, it is all the more impressive to note that Dr. Carsten Breitfield, CEO and co-founder of Byton, and the other co-founder and president, Dr. Daniel Kirchert, introduced the M-Byte just last year at CES, then even more conceptual than it is now.

Plans call for the production of the M-Byte to commence later this year, with sales occurring in China in Q4, to be followed by sales in the U.S. and Europe in Q3 2020.

The M-Byte will come in two versions, one a RWD model with a 71-kWh battery that should provide a range of 250 miles, and another, AWD, with a 95 kWh battery that provides a 325-mile range. The vehicle can be recharged to 80 percent within 30 minutes. It features over-the-air update capability, as well as what is described as Level 3 autonomy. 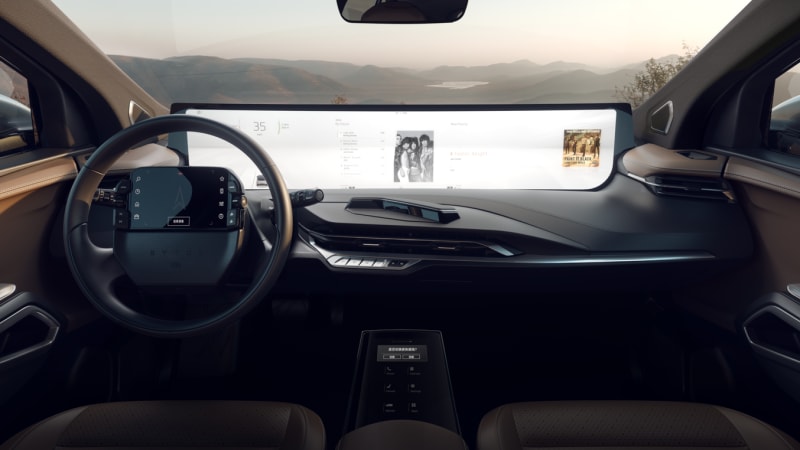 The most notable number — or at least the one that Brietfield and Kirchert emphasized at CES — is 48, which is the width, in inches, of the "Shared Experience Display." In other words, think of the entire width of the instrument panel, and there it is. This provides all manner of infotainment, all at once.

When asked about the potential for driver distraction vis-à-vis a screen that is found, say in a Tesla, Breitfield replied that he actually owns a Tesla and finds that having to glance right to see the screen in that vehicle takes his eyes away from the direction of travel. The information's right in front of him on the M-Byte screen.

For control of the massive screen, there is a 7-inch driver table in the center of the steering wheel just above the airbag. And to allow the front seat passenger some say in what's being displayed (or played on the audio system), there is an 8-inch touchpad in the center console.

Because the M-Byte is considered to be something of a digital technology tour-de-force, the driver can interact with the vehicle via touch, voice (they're using Amazon Alexa), facial recognition, hand gestures, and, yes, even hard buttons and a couple of stalks (turn signals and wipers: head designer Benoit Jacob acknowledged that these are "bullet-proof solutions").

The first driveable Bytons were produced in August 2018. By the end of 2018, the company had produced 100 vehicles. The production facility is still in the process of being fully outfitted. When full production is reached, there will be a capacity of 300,000 vehicles per year. (There is also a second model, the K-Byte, planned for 2021 and another vehicle for 2023.)

Brietfield anticipates that the company will sell 50 percent of its output in China, 30 percent in the U.S. and the remainder in Europe.

And here's a number that may be more remarkable than the size of the Shared Experience Display: the vehicle is to start at $45,000.

Perhaps the M-Byte is something that will exist.