Could it be the last new one left? Remember Porsche's Project Gold? Last year, Porsche built the last factory-new 993 generation 911 Turbo they're likely to make, using a new-old-stock body shell that had been hanging around their factory premises. Now, it's your chance to do a similar revival of a classic BMW M3, as a rare unused NOS body shell has surfaced in Dallas.

The seller says the $30,000 body shell is possibly the last unused and unregistered factory E30 M3 shell left in existence. Even if another one was still holed up somewhere in a BMW storage facility, or in a weird shrine dedicated to BMW's Deutsche Tourenwagen Masters achievements, there's a very good chance this is the only one of its kind in North America — if you have one in your garage, we'd be delighted to amend our article. In any case, the primer-grey shell still wears all its factory tags, with its part number 41 00 1 979 078 visible in several places.

There are no front wings, doors, hood, trunklid or anything else than the base, sound deadened-body shell, but it's still clearly an M3 item, as the rear quarters have characteristic widebody wheel arches and the C-pillar is M3-specific — one of the things that make the E30 M3 a coupe compared to the regular two-door E30, according to some. The body has also never been assigned a VIN tag, and it's likely never to have held a 200-hp S14 four-cylinder engine between its front frame rails. According to the seller, the M3 body was stored in a bubble for ages, and it's been with him for 15 years. The level of care is notable, as the seller says the body shell has been swapped over from its original factory dolly to a new one to meet U.S. import requirements.

So, to an E30 M3 buff, this is as close to a perfect blank canvas as possible. Bring your own doors and your own crate engine, and make this the best example you can think of. Bringing a regular, used donor body to this condition would go a long way towards $30,000. 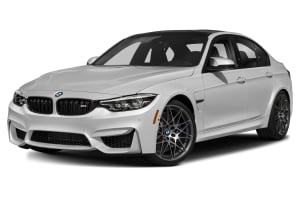