Reuters
FRANKFURT — Executives from BMW, Daimler and Volkswagen have been called to talks with White House economic adviser Larry Kudlow on Tuesday, a source familiar with the discussions told Reuters.

The meeting comes as the Trump administration considers tariffs on cars imported from Europe and after China agreed to "reduce and remove" tariffs on vehicles exported from the United States.

Although the European Commission handles trade negotiations on behalf of the common trading bloc, the Trump administration has summoned auto bosses as part of a campaign to "rebalance" global trade flows.

BMW on Monday said Chief Financial Officer Nicolas Peter will attend the meeting in Washington, while Daimler said Chief Executive Dieter Zetsche will be in attendance. VW declined to comment on whether its CEO Herbert Diess will go to the U.S.

The German car bosses will underline the European Commission's plea to cut tariffs on cars and to explain the importance that German industry plays as a net exporter of vehicles from the United States, a person familiar with the discussions told Reuters on Monday.

"We are worried about tariffs. The German automotive industry relies on open markets," a senior German car executive, who was on his way to Washington, told Reuters.

"Countries have interests that they intend to pursue. We will look at addressing these issues. In this context, we appreciate the talks are taking place, it is better to talk with each other than about each other."

U.S. President Donald Trump, who has taken an aggressive stance on trade issues, agreed in July not to impose higher duties on E.U. cars while the two sides sought to improve ties in a number of fields, from regulatory cooperation to energy and a deal to remove tariffs on industrial goods.

Germany's Wirtschaftswoche magazine last week reported that the U.S. Department of Commerce would recommend a 25 percent customs duty on car imports from all countries except Canada and Mexico.

Chancellor Angela Merkel said that although the European Union is formally responsible for negotiating trade on behalf of Germany, German carmakers play an important role in global trade.

"The German carmaker, or the German firms, are big employers in the United States of America so there is definitely reason to talk to the U.S. administration about issues like what investments and what future the German carmakers see as American employers," she said on Monday. 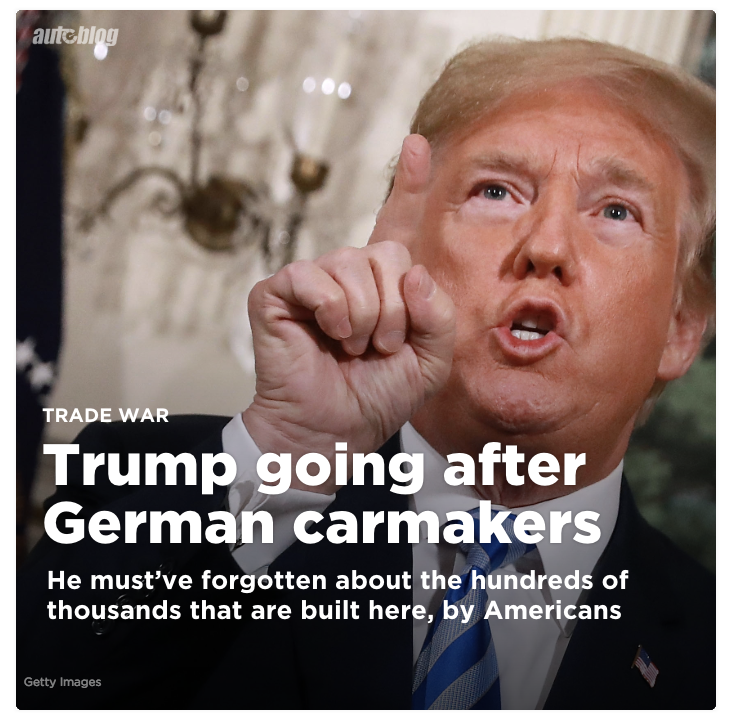