Zac Palmer
Audi said it was bringing its E-Tron GT concept car to the L.A. Auto Show, but now we have some teaser images of what is claimed to be the E-Tron GT sedan. The pictures popped up on Germany's Bild and show Audi's design boss Mark Lichte with the vehicle in question. It's not exactly clear from Bild's report if these images are for a concept or a production car, but it does claim the E-Tron GT Sedan will be ready for the market in 2020. We're inclined to believe these teasers offer a decent representation of what the production E-Tron GT sedan will be like. A few details about the sedan were also released. Supposedly, it will have a 100 kWh battery pack, good for 248 miles of range. Acceleration to 62 mph is set to happen in under 4 seconds as well.

Perhaps the most interesting tidbit of information Bild gleaned is that the E-Tron GT sedan will be built on the Porsche Taycan platform. That being said, we might not be doing it justice by calling this the " Taycan" platform, because Audi just might come to market with a car on it before Porsche does. The batteries are to be located in the normal electric car spot: under the floor. 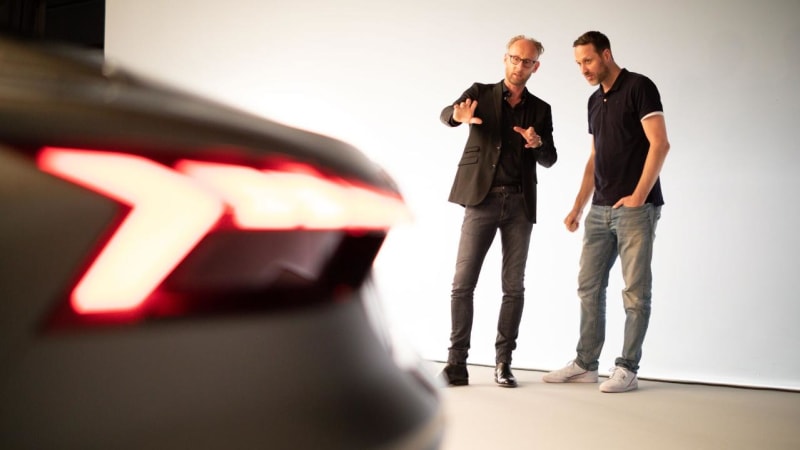 From what we can tell, these teasers show a sedan that's sleeker than an A7. Size-wise, there's no doubt the E-Tron sedan will compete with the Tesla Model S. Whatever Audi has here is set to be revealed on Wednesday in L.A. We'll be there when it happens, so stay tuned for more electric Audi coverage.