While the car industry is recovering from the free-for-all automotive costume contest known as SEMA, BMW is here to offer an antidote: the stylish, powerful and premium BMW M850i xDrive Convertible. Whereas SEMA cars have just about every vehicle alteration known to man, this new release only has one major change: a convertible top.

Following the release of the BMW 8-Series Coupe earlier in 2018, the convertible launches with the same powertrain setup. The M850i xDrive 'vert features the new 4.4-liter TwinPower twin-turbocharged V8 that debuted in the coupe. The engine features two twin-scroll turbos, with cooling tucked into the V of the engine block, variable valve control, and variable camshaft timing. BMW also made several small tweaks to maintain reliability and efficiency, including using a stronger type of aluminum alloy for the block, wire-arc-sprayed iron coatings on the cylinder walls, Grafal-coated pistons, high-flow intake ports, and a viscous damper on the crankshaft.

BMW rates the updated V8 at 523 horsepower between 5,500-6,000 rpm, and 553 pound-feet of torque between 1,800-4,600 rpm. It's linked to an eight-speed Steptronic Sport transmission with shift paddles, automatic stop-start, and launch control. The intelligent transmission also takes input from the navigation system to improve efficiency and driving dynamics based on the route. All that power is put to the ground through BMW's rear-biased xDrive all-wheel-drive system that can funnel up to 100 percent of torque to the rear wheels. According to BMW's estimates, it will do 0 to 60 in 3.8 seconds and has a limited top speed of 155 mph.

The M850i xDrive comes standard with a double-wishbone axle up front, a five-link axle in the rear, and BMW's adaptive M suspension. Electronically controlled dampers continuously change compression and rebound based on the driving circumstances to maximize either comfort or sporty driving. Active steering also allows the rear wheels to turn up to 2.5 degrees. 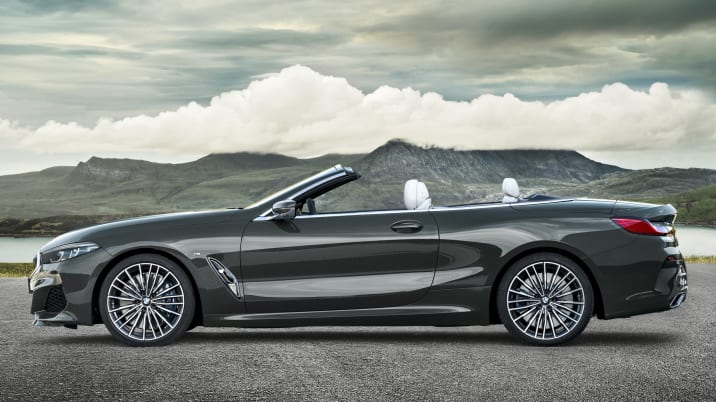 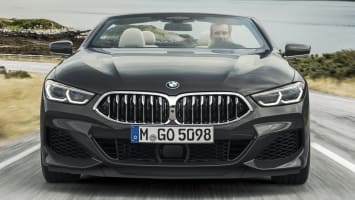 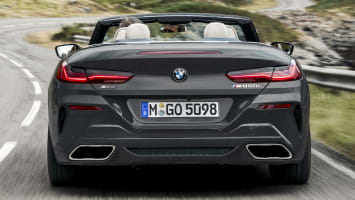 The convertible's styling should come as no surprise. The coupe looks extremely similar to what was shown in concept form, and the convertible looks just like the coupe. Heck, we already saw convertible mules nearly completely uncamo'ed back in September, and the final result is pretty identical to the car in the spy shots.

The M850i convertible, seen in European form here, looks slightly more upright than the coupe due to the soft top, but it retains a related low and wide overall shape. Two oversized connected kidney grilles front a long hood with a short front overhang. Punched-in doors smoothly flare out into a hefty rear, which is characterized by slim horizontal LED taillamps, angular aero, and aggressive dual exhaust outlets. BMW paid special attention to the convertible stow cover, giving it a slight double bubble appearance when the top is down. With the push of a button located in the center console, drivers can put the top down in 15 seconds while driving up to 30 mph.

The convertible has two invisible features not found in the coupe. Concerning safety for open-top cars, BMW developed a rollover protection system. When the car's computer senses the risk of a rollover, it will automatically deploy two aluminum bars behind the rear seat headrests. This, paired with the A-pillar windshield surround that is designed to withstand impacts, keeps occupants protected during accidents. 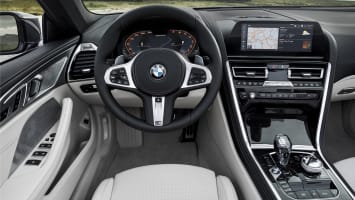 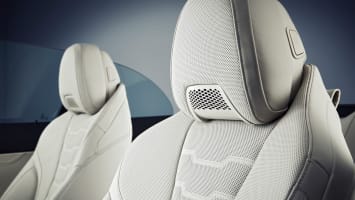 The second feature is a little less serious. BMW built air vents into the front seat headrests that act as neck warmers. Air can be adjusted to three different settings or to an automatic mode that adjusts flow based on vehicle speed. Real convertible drivers know there are few better feelings than the top down on a crisp fall day with the heat blasting inside.

Regarding the interior, the convertible is almost identical to the coupe. A 10.25-inch center screen features the seventh generation of BMW's iDrive system, while a 12.3-inch display sits behind the wheel, replacing a traditional instrument cluster. The infotainment is controlled by a bezeled turn-dial next to the gear selector.

For those who are willing to forgo the swept-back roofline of the coupe for a drop-top, BMW is charging $9,500 extra. That puts the price at $122,395 compared to the coupe's $112,895 (both include destination charges). As of this writing, BMW plans to launch the M850i Convertible in March 2019.