Though still BMW Z4-based, the Supra's interior is unique

In the ( long) lead-up to the 2019 Toyota Supra debut, it has seemed like only the exterior styling made it something other than just a hardtop version of the BMW Z4. It uses the same turbocharged inline-six, the same transmission, and early spy shots indicated the interior might even be the same. But we've learned there may be more differences between the two cars than we expected, and these latest photos of the reborn flagship Toyota sports car further that idea. They show that the Supra does in fact have a unique interior, albeit one with strong BMW influence.

The main differences are in the gauge cluster and dashboard. The Z4 uses a flat screen for its instrument cluster, and it has slightly geometric digital dials that fit the contours of the instrument panel hood. In the Supra, the instruments are dominated by a huge dial for the tachometer, which is sure to please enthusiasts. Nestled in the middle of the tach is an information screen of some sort, and another screen is on the left displaying speed. On either side of all these gauges are simple digital bars that indicate things such as fuel level and coolant temperature. 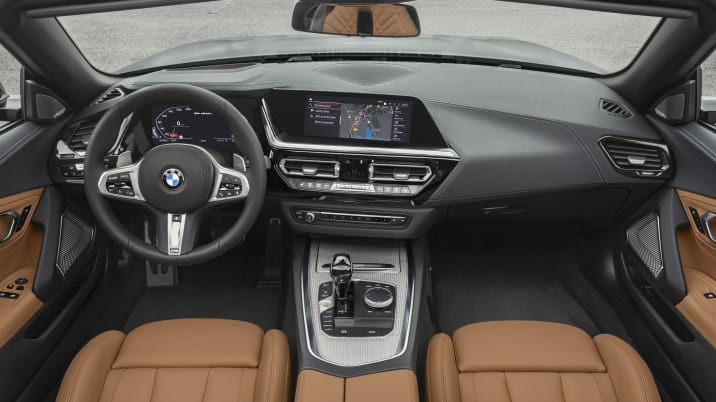 The dashboard eschews the traditional BMW shape that has controls canted toward the driver. Instead, the Toyota's is flat all the way across. It also features an attractive horizontal feature that integrates the air vents. Strangely, the center console has a sail panel on the driver's side, partially obscuring the shifter and under-dash storage area. We're not sure if that's a permanent part of the design or just something for this prototype.

The BMW influence is still noticable, though, as every button, knob and stalk we can see is from the BMW parts bin. That includes the iDrive controller, which is the current version, as opposed to the updated unit found in the Z4, 8 Series and X7. The shifter is also clearly based on BMW shifters, but seems to have a unique plastic knob.

These spy photos also give us a close look under the Supra's hood, and even under the engine cover. While we typically prefer car's engines to be on display rather than tucked away, we see why the Supra's engine is covered. It's not pretty. It's a mess of wires, hoses and odd plastic parts. What's impressive, though, is how far back the engine is relative to the car's nose. Still, it looks like no more than half of it hangs ahead of the shock towers, so it's not quite a front-mid-engine layout. It does boast a 50/50 weight distribution, though.

We've driven the car, and while specs are yet to be released, it does show promise, and it does feel as though performance is on par with BMW Z4 six-cylinder specs. We expect the car to finally be revealed at the Detroit Auto Show this coming January. Full details on power, weight and more should be released at the same time.