Some analysts think he might actually have to resign

Shares of Tesla dived nearly 14 percent on Friday after U.S. regulators accused Chief Executive Elon Musk of fraud and sought to remove him from his role in charge of the electric car company.

The U.S. Securities and Exchange Commission said in a lawsuit that Musk had made a series of false and misleading statements and caused volatility in the company's shares with tweets last month which raised the potential of taking Tesla private before swiftly withdrawing the idea.

Musk, 47, is the public face of Tesla, and J.P. Morgan analyst Ryan Brinkman questioned how easy it would be for the $50 billion manufacturer, which is still losing money, to raise funds at affordable rates without him.

"We are concerned that decreased confidence in Tesla on the part of investors may impact the company's ability to raise capital on amenable terms," Brinkman said.

Four early research notes from Wall Street analysts and brokerages all said that Musk might have to resign. 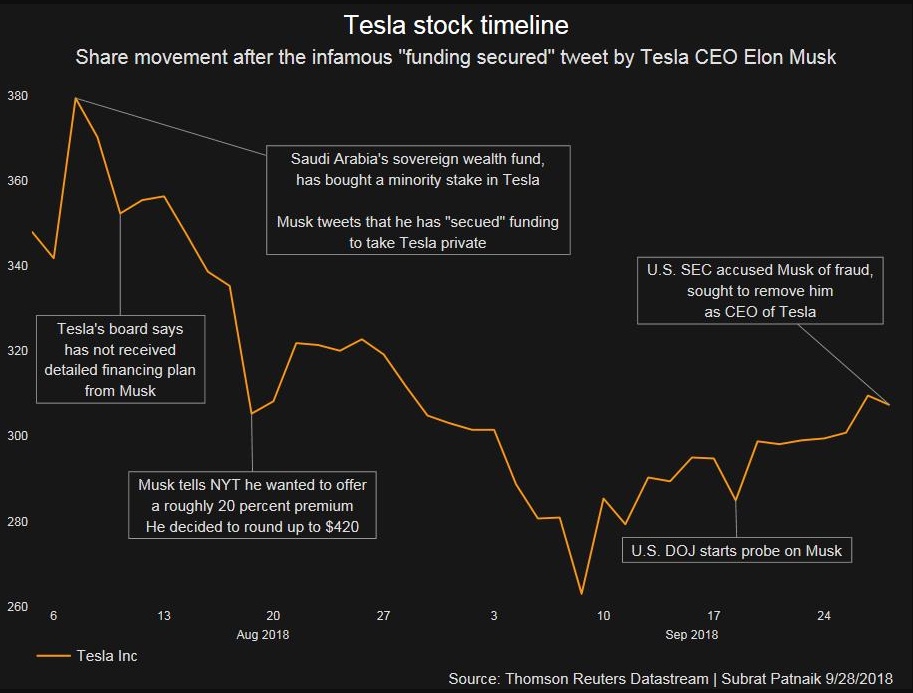 The Silicon Valley billionaire said overnight he had done nothing wrong and Tesla's board reiterated its support for him.

"The SEC civil action may lead to Musk's exit from Tesla (either permanently or temporarily) and the Musk premium in the shares dissipating," Barclays analyst Brian Johnson said.

Shares were last down 10.8 pct at $274.17 in trading before the bell in New York, which would wipe about $6 billion off Tesla's market value.

"Despite this, we think the company will survive," he said.

The SEC's lawsuit, filed in Manhattan federal court, caps a tumultuous two months set in motion on Aug. 7 when Musk told his more than 22 million Twitter followers that he might take Tesla private at $420 per share, with "funding secured".

The regulator charged that Musk "knew or was reckless in not knowing" that his tweets were false and misleading.

Jeffrey Osborne, an analyst at brokerage Cowen, said investing in Tesla equity and bonds over the past few weeks had been "a game of choose your own adventure".

"The ball is in the Board's court now and it remains to be seen what will happen next," he said.