SANTA BARBARA, Calif. — You keep hearing that America's insatiable appetite for crossovers is putting sedans on the endangered species list, but Americans still buy 6 million cars a year, a third being mid-sizers. Furthermore, Nissan's internal research says 30 percent of millennials and 44 percent of Gen Z buyers actually prefer sedans. The younger the buyer, the more likely their intent to buy one, attracted to lower prices, better fuel economy, and not wanting to drive what their parents drove. The outgoing Altima bagged about 200,000 sales a year — enough for Nissan to double-down with a completely redesigned sixth-generation 2019 Altima with a new chassis, two brand spankin' new engines, and a new all-wheel drive configuration.

Freed from the constraints of having to be all things to all people, Nissan has made the Altima more sedan-y. "Proportions," design director Ken Lee says, "[are] what separates a sedan from an SUV." As such, Lee's team colluded earlier than normal with engineering to make certain the engine sat low in the bay, even angling it back for clearance. "That pushes everything down," Lee told us, "The cowl, the beltline, the roof." The resulting body sits one inch lower, one inch wider, and one inch longer than the outgoing model. "The glass area is taller than it would've been too," says Lee.

It wears the classiest interpretation yet of Nissan's V-Motion corporate face, with a large grille that doesn't look like the gaping maw of a Lovecraftian sea creature. Lee points to its honeycomb grille, paying subtle homage to Nissan Bluebird sports sedans of old. The V's arms extend through the hood, forming sculpted ridges on our Scarlet Ember tester. In the golden Southern California sun, it's like looking into an Instagram filter. The effect is available on two other premium colors that contain special layers and cost extra: Brilliant Pearl White and Sunset Drift Orange. 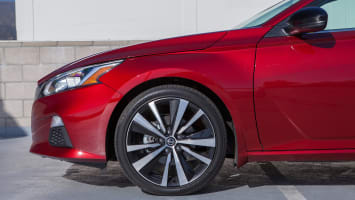 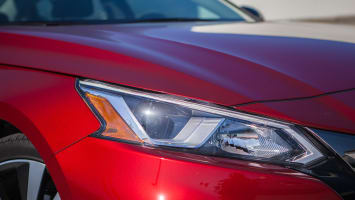 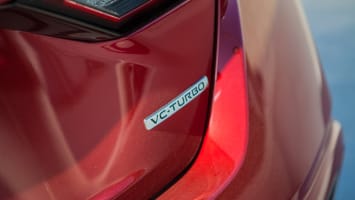 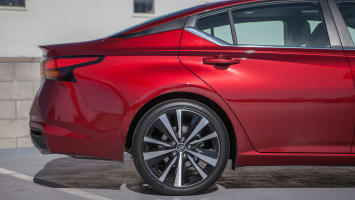 To match its new skin, the Altima's trim walk finally makes sense. The base Altima S starts at $23,750 and comes with an all-new direct injection 2.5-liter four-cylinder replacing the outgoing 2.5. It nets a 9 horsepower and 3 pound-feet increase over last year's model, giving it 188 at 6,000 rpm and 180 lb-ft at 3,600 rpm. That places it about mid-pack among midsize sedans. It yields 1 mpg better in city and highway conditions too, averaging 28 and 39 mpg, respectively.

That is, in front-wheel-drive configuration — a necessary distinction because the new Altima will be the first AWD sedan sold by Nissan in this country. With AWD, fuel economy drops to 26 mpg city and 36 highway, but that still ekes out the Subaru Legacy, and makes for a credible alternative.

Next up is the sporty Altima SR at $25,100, which Nissan predicts will be the most popular trim. The outgoing generation offered a V6 with the top luxury trim. Now you can now order an SR with the hotter 2.0-liter variable compression turbo four as a $4,050 option. That instantly makes it the most compelling Altima in the lineup. 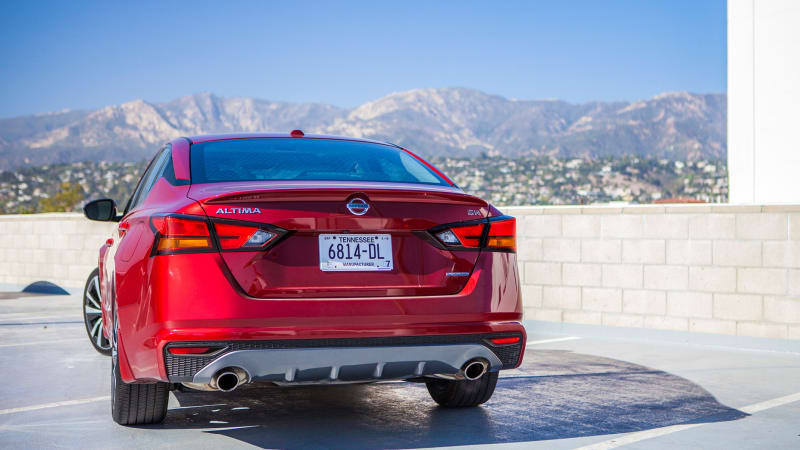 Above the SR is the SV at $27,930, which adds driving assists, climate control, and remote start ­— but no VC-Turbo. Standard on SV and up is Nissan's ProPilot Assist system. The $29,840 SL is the luxury trim, adding leather seats, a Bose premium sound system, and NissanConnect smartphone-controlled features. At the top of the pyramid is the Platinum, which starts at $31,780. Basically, it's an SL with the 19-inch wheels and tires of an SR, plus a few gewgaws like the bird's-eye Around View Monitor. The VC-Turbo returns as an option, but in this case the premium is just $3,000. Finally, Nissan is offering for 2019 only an Altima Edition One, essentially a launch edition based on the Platinum VC-Turbo; if you must have gray wheel finish or badged floormats, 3,900 will be made.

We spent a little time in an AWD Platinum with the 2.5, but much more time in the very interesting SR VC-Turbo. The SR's novel engine debuted in the Infiniti QX50, and it impressed, even if the plush crossover wasn't quite the right fit for it. It's more natural in the Altima, even if it's detuned to 248 horsepower — 20 fewer than its Infiniti cousin. It still feels sprightly thanks to "a different torque converter and final drive compared to the QX50," revealed Nissan's chief powertrain engineer Shinichi Kiga.

The VC-Turbo was 20 years in the making, an engineering marvel that mechanically changes its compression ratio on the fly from 8:1 to 14:1 and anywhere in between, bypassing some of the normal compromises between power and efficiency. The VC-Turbo's techno-wizardry helps it reach peak power at 5,600 rpm, and even better, its peak torque of 280 lb-ft arrives at just 1,600 rpm. Moreover, with an EPA estimated 24 mpg city and 34 mpg highway, the VC-Turbo's efficiency bests all in its class but the Mazda 6. 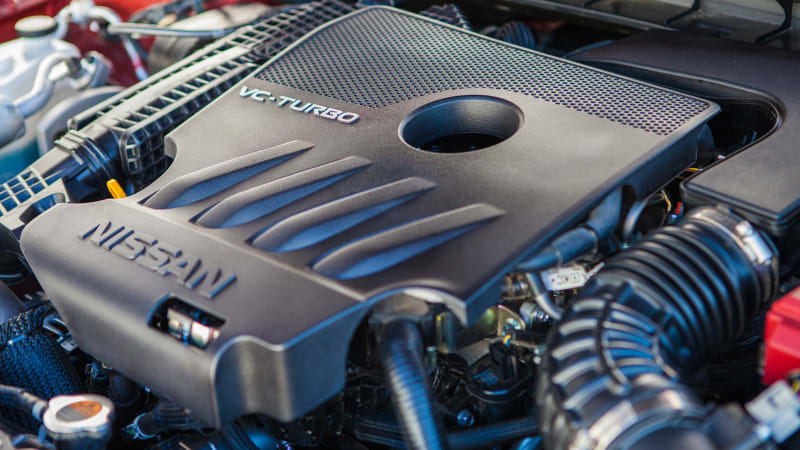 The car does scoot, although the wheel twitches with a hint of torque steer. What's more irksome, however, is the exhaust note. It must be a different tune than that of the QX50, because as cushy as that crossover was, its VC-Turbo emitted a sporty purr. In the Altima SR, the tinny note is a disservice to the technology inside. The 2.5 sounds better.

Besides that, the cabin is fairly resistant to wind and road noise. The redesign modernizes the interior, with a graceful new dash and large 8-inch touchscreen that offers home screen customization. Apple CarPlay and Android Auto are standard on all trims now. A new sporty flat-bottomed three-spoke steering wheel feels good underhand. The SR's supportive, orange-pinstriped seats boast genuine contrast stitching — none of that faux molded stuff — that continues along the dash, console, steering wheel and shift boot. Chrome is out, even on the Nissan logo; any brightwork is finished in satin silver.

However, in a testament to how upscale the midsize sedan class has moved, there are nicer cockpits out there. The Honda Accord and Mazda 6's, for example, feel more luxurious and possess sleeker designs. In higher Altima trim levels, perforated leather seats and gray "High Tech Wood" trim help narrow the gap, but come just short of closing it. Other nitpicks: The black dot-gain border around the windshield intrudes along the bottom edge. The third brake light takes a big chunk out of rearward visibility. Better sightlines would contribute to the sportiness Nissan seeks. 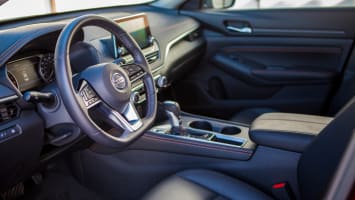 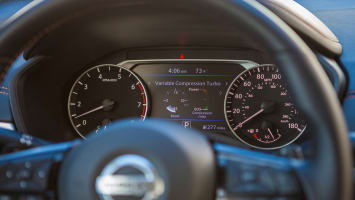 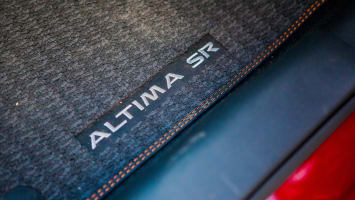 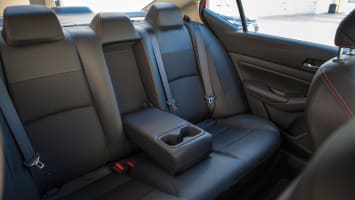 Still, with a 10 percent increase in spring rates and SR-exclusive dampers, the sport trim is a massive improvement over the previous generation. The electronic power steering on the SR is tuned for a more responsiveness, and feels properly weighted. Despite a rather portly curb weight of 3,418 pounds, the SR feels planted and predictable in corners. More deluxe trim levels have softer suspensions and lighter steering, and they do too good of a job isolating you from the road.

Sport mode will let the SR hold the CVT's simulated gears longer, or use the SR's exclusive shift paddles, but this only highlights how the Altima SR is absolutely crying out for a stick shift. That's a compliment — on a bland chassis, a manual makes driving a chore; on a capable one, it enhances the motoring experience. It's in part what draws us to the Accord and Mazda 6. A VC-Turbo engine matched to a manual would be a potent powertrain. So potent that, I kid you not, I actually had a dream in which Nissan offered one.

The 2019 Altima goes on sale in October. Since the original Altima debuted in 1993, on the cusp of the SUV boom, an entire human generation has passed. It makes sense that their offspring would grow up wanting something other than their parents' crossover. And when they're ready to buy, the Altima (and in particular, the SR) will be waiting for them.