Lincoln's mid-size crossover isn't the glitziest in its lineup, but a strong powertrain and slick styling keep it contemporary. Other luxury crossovers its size will offer a better interior, though.

SANTA BARBARA, Calif. — Its name is new, but the 2019 Lincoln Nautilus is really a rebranded, restyled and updated version of the second-generation Lincoln MKX, which has been on sale since 2016. Renaming your bestselling vehicle is risky, but Lincoln has been struggling, and it feels the names of its vehicles are partly to blame.

Recall that since 2007, Ford's luxury brand has used letters to name some models, including MKZ and MKX, and traditional names on others like Navigator and Continental. Well, now it's ditching the letters and renaming those vehicles. The MKX is now the Nautilus. The smaller MKC is rumored to become the Corsair, which was a name used by Edsel back in the 1950s. The seven-passenger Aviator will go on sale in 2019, and the MKZ's new name is anybody's guess. Zephyr again, maybe? NordicTrack is already taken.

Lincoln has also been rolling out a new grille design, which debuted on the Continental in 2017 and replaces the unloved winged look that was supposed to remind luxury buyers of the elegance of the 1939 Lincoln Continental — but didn't. Fitting the new grille to the 2019 Nautilus completes that rollout, and the five-passenger SUV is certainly more handsome than before. Its mesh is a repetition of the Lincoln Star logo, and it works. The SUV's front fascia, headlamps and hood are new as well, and the hood has grown a sizable and attractive center peak.

Underneath that hood is a new 2.0-liter turbocharged four-cylinder with direct injection. It's the same engine used in the smaller MKC and the Ford Edge, which shares the Nautilus' chassis, but Lincoln doesn't use the name EcoBoost for this and its other powerplants. The 2.0-liter replaces the naturally aspirated 3.7-liter V6 as the standard engine, and it's rated 250 horsepower at 5,500 rpm and 280 lb-ft of torque at 3,000 rpm on 93 octane fuel. 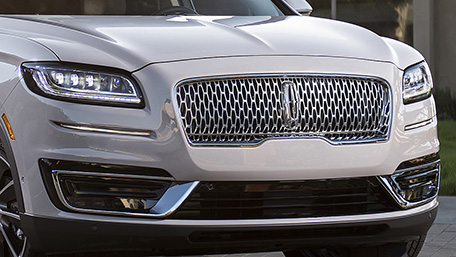 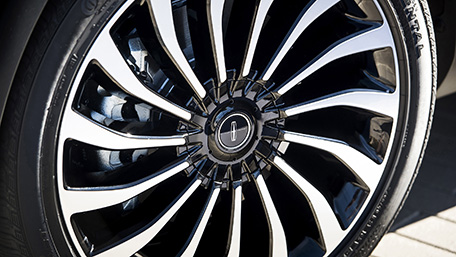 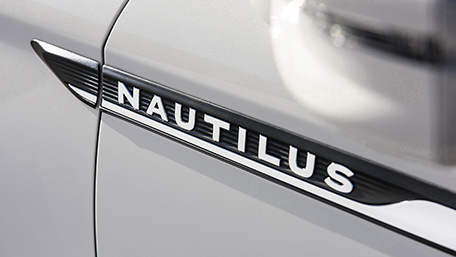 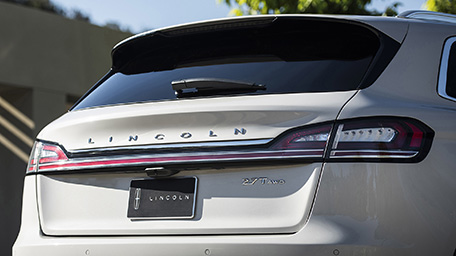 Both engines are offered in all trim levels with standard front-wheel drive or optional all-wheel drive, which is a new system to Lincoln that disconnects the rear driveshaft to improve highway fuel economy. All-wheel drive adds 163 pounds to the SUV.

We drove two Nautiluses (Nautili?) around Santa Barbara in Southern California, both with all-wheel drive and 21-inch Continental rubber. The first was a 2.0-liter-powered Nautilus Reserve, and the other was a top-of-the-line Black Label with the 2.7-liter V6. Both were quick and quiet. The 2.0-liter is smooth and refined. Power delivery is linear, and the new eight-speed is a huge improvement, with tightly spaced ratios, no reluctance to downshift and firm 6,000 rpm upshifts at wide open throttle.

As expected, the V6 is noticeably quicker, with a surge of power at 3,000 rpm and a strong pull up to six grand. This engine uses a different eight-speed (both are designed and built by Ford, according to engineer Jim Pfeiffer), and its unique gearing is well-matched to the V6. The new combination should shave a few tenths off the MKX's 6.9 second run to 60 mph. Paddle shifters are standard, and both engines have very smooth stop-start systems. 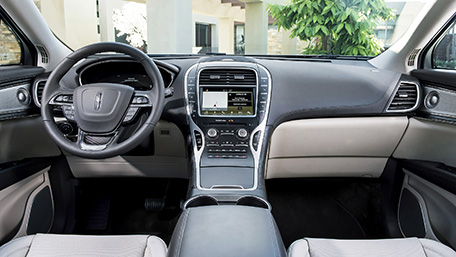 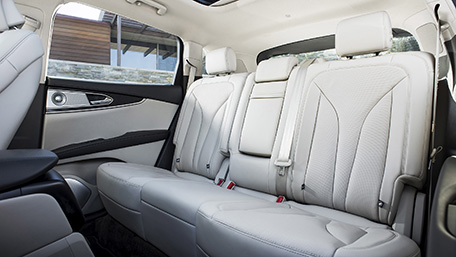 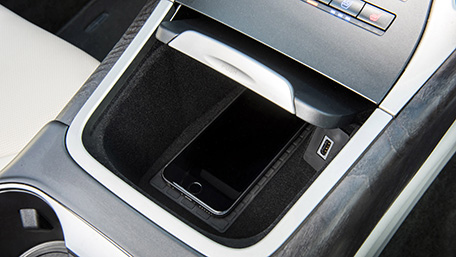 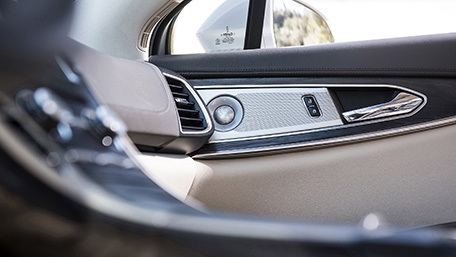 Lincoln has also added acoustic side glass to quiet the interior, which is impressively isolated from wind and road noise, even above 80 mph on the choppy concrete of California's 101 freeway. Other interior changes include some new interior colors and trim choices, wireless phone charging and the virtual and configurable gauge cluster lifted from the Navigator. The very comfortable 22-way power adjustable seats, which include massage, remain an option.

The 8-inch touchscreen for the Sync 3 infotainment system also remains, as does the pushbutton shifter, which can take some getting used to. Select S (Sport) instead of D (Drive), and the Nautilus gets a bit more steering effort and tighter throttle response. It also remaps the transmission for more aggressive gear selection, which includes downshifting under hard braking.

Tap a few buttons on the steering wheel and you can also set up the suspension to your liking, anchoring your selection to the D and S modes. There are three settings: Comfort, Normal and Sport. The differences between the three are subtle, but noticeable. There's considerably more body control in Sport. Around town the Comfort setting is pleasantly plush, but its softer damping fails to control those big wheels and tires as well, and there's some road surface intrusion into the front seats at highway speeds. Normal is a wonderful compromise with impressive isolation, compliance and no float. It feels the best most of the time, and it would be our go-to along with S mode. 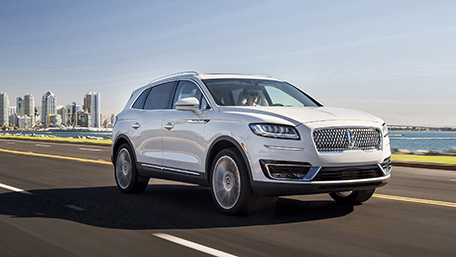 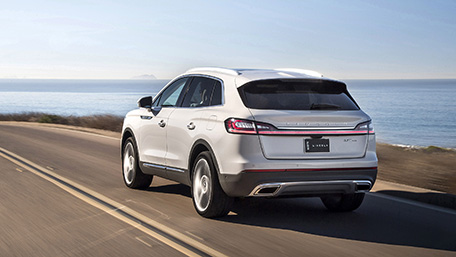 On the twisty two-lanes around Castaic Lake, which are smooth as glass, the Nautilus could keep a satisfying pace. Its all-wheel drive and 265/40R21-sized tires providing admirable grip, and there's plenty of power to get you to the next corner. Lincoln revised the suspension damping and changed the rear suspension bushings, but its engineers say the goal was to improve the ride, not to add handling performance. I'd say they achieved both.

Unlike the MKX, every Nautilus, even the lower base and Select trim levels, comes with Lincoln Co-Pilot360 – a sizable assortment of driver aids including a blind spot warning with cross-traffic alert, pre-collision assist with automatic emergency braking and a lane-keeping system. Buyers can pay extra for evasive steer assist, which is also new. It'll steer the SUV to help avoid collisions if braking alone is not enough.

A drivers assist package is offered on Reserve and Black Label models, adding Adaptive Cruise Control with Lane Centering technology. This system will steer the SUV down the road, but it does ask you to keep your hands on the wheel. Using the system on the freeway, we found it to be too easily confused by broken lane markers. It didn't feel as locked in as other systems we've tried. The Lincoln's automatic emergency braking is also a little rough around the edges. Like a new teen driver, it over-applies the brakes at times. 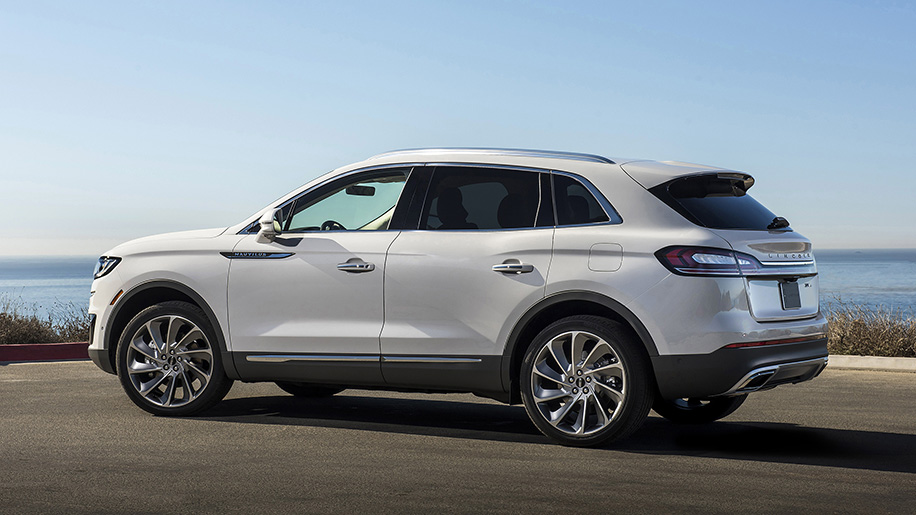 With the 2.0-liter and FWD, pricing starts at $41,335, and jumps to $45,540 for the Nautilus Select and $49,870 for the Reserve. That's one or two grand more than the 2018 MKX, but it's competitive with the class-leading Lexus RX. Lincoln says less than 10 percent of MKX buyers went for the Black Label trim, but it expects more Nautilus customers to step up. Lincoln limits Black Label sales to only its best dealers and standalone stores, which is about 25 percent of its 800 retailers nationwide. Black Label prices start just under $58,000, a nearly $3,000 increase from last year.

For years, Lincoln has been talking about its comeback. It keeps telling us about its resurgence. But the products just haven't been there. The MKS and Continental were disappointments, and the MKC is nothing special in a very competitive class. Well, it's finally beginning to actually happen. Lincoln's resurgence is real. Or, it's getting real. It began with the new Navigator, which makes the Cadillac Escalade feel like a farm truck, and now the Nautilus, which feels like much more than a tweaked MKX with a new grille. Maybe the Aviator can keep it going.

But the executives running Lincoln would be smart to realize that nobody really cares what the car is called. Letters, numbers or nouns, none of it makes any difference. It's the car that matters. Just make it good.