Proving the mettle of the latest ultimate off-road factory Jeep

Scott Oldham
LAKE TAHOE, Calif. — When all 4,145 pounds of Jeep slams down on the rock, the BANG! cuts the tranquility of California's Sierra Nevada mountains, echoes off the surrounding hillsides, and travels for miles through the thick unmolested forest of ancient pines. The brutality of the impact sends a shutter though the Wrangler's chassis, compresses our spines into its seat padding, and momentarily yanks my hands from its leather wrapped steering wheel.

Then comes the high-pitch screeching as the torque of the Jeep's 3.6-liter V6 and the frenetic clawing from its knobby BFGoodrich All-Terrains as it violently drags the steel of the Wrangler's floorpan along the rock's face. There's a groan from the front suspension as it reaches max articulation and the inevitable crunch when the solid mass mangles the thin gauge stainless steel of the JL's tailpipe.

With the first obstacle cleared and 16 miles of America's most challenging off-road trail still ahead, I realize the Rubicon Trail Foundation has a lively sense of humor. Flip open the organization's printed map of the "world-famous Rubicon Trail" and the first thing you see is a quick list of tips to help you get from one trailhead to the other safely and responsibly. Right under where it advises you to pack out all trash and use the portable toilets, it states, "High clearance vehicles recommended."

LOL. ROTF. LMAO. Bwaaaaahaaaaaaaa. That's a good one. But I guess it takes just one jerk in a Camry to ruin it for the rest of us. Jeep Jamboree USA, an organization famous for its off-road events on the trail, makes the point with a little less comicality, "A minimum of 33-inch tires, front & rear lockers, tow points, skid plates, rocker panel protection and CB Radios are mandatory requirements for the Rubicon Trail Jeep Jamboree," states its website in oversized bold letters.

Our 2018 Jeep Wrangler Rubicon, the latest ultimate off-road factory Jeep on the new JL chassis, has all of it with the exception of the CB radio, which is unfortunate since black bears are easier to come by on the Rubicon than cell service. Our iPhones are as useless out here as mechanical sympathy for our steed. "Don't even try it," says one of our trail guides as he watches me fish my device from my luggage. "There's no service until we get back to Tahoe." That's a big 10-4.

Lake Tahoe's crystal blue waters and charming downtown are about 30 miles from the Rubicon's eastern most trailhead. It's our finish line. And sometime tomorrow we hope to reach it with minimal damage to the Jeep's bodywork. Along the way we'll pass several smaller bodies of water, each formed by receding glaciers tens of thousands of years ago, including Loon Lake, Spider Lake and Buck Island Lake, each bluer and more breathtaking than the next.

Conditions are perfect, warm, sunny and dusty. With the transfer case in 4L and the front sway bar disconnected, we're averaging about 1 mph through the first few miles of the trail, but we haven't had to lock the rear axle yet. We've also been leaving the eight-speed automatic transmission in Drive, allowing it to use first and second gear at its discretion. Although we've smashed the Jeep's rock sliders, undercarriage and rear tow hook down hard numerous times, and the tailpipe has been fishmouthed, the bodywork has yet to touch tree or rock.

And then it happens at Little Sluice, a well-known part of the trail and a section many say is the most difficult. It's basically a bolder field sandwiched between two rock walls. I'm advised to lock the rear differential and follow the direction of my spotter. Climbing over the first large mass, scraping the undercarriage across the rock's surface, the front tires are already on the next set of boulders, while the rears you just clearing the first. Wham, the right corner of the rear bumper comes down hard on a jagged edge of stone sending a shiver through the vehicle.

I turn to my co-driver. "That didn't sound good." My attempt to be funny is ill-timed. Distracted I crank in a bit too much steering while climbing over the next batch of boulders, each the size of a coffee table, and nearly rub the right rear fender flare clean off the Jeep. It's a horrible sound, as the plastic fights for its life against the jagged grain of the rock, but through sheer luck I manage not to damage any steel.

Originally a Native American footpath, the 22-mile long Rubicon Trail has been a public road and traversed by automobile for nearly 100 years. It's easy to find historic photos of adventure seekers and vacationers making the trek by car in the 1920s, and then by Jeep and Land Rover after the war. Many didn't make it. The trail's infamous Cadillac Hill is named for the wreckage of a 1930s Cadillac (some say it's a LaSalle) still sitting where it landed after going over the side. Jeep has been testing its new models here for decades ( Toyota also tests the 4Runner here), and in a stroke of marketing genius, it began calling the most off-road capable version of its most capable model the Wrangler Rubicon in 2003.

"The Rubicon is the ultimate test bed for Jeep vehicles," says Scott Tallon, Director of the Jeep Brand at FCA. "And the new Wrangler Rubicon is the most capable production vehicle on the planet." The vehicle's specs support the claim. The JL Wrangler Rubicon has 20 cm more wheel travel and articulation, more ground clearance, better approach, departure and breakover angles. It's also lighter and has an improved turning circle, improved crawl ratio and tougher Dana solid axles front and rear, which continue to be mounted on coil springs.

"Only one person at Jeep has ever suggested that we change the front suspension from the solid axle to an independent design," says the Wrangler's Chief Engineer Brian Lees. "That person doesn't work at Jeep anymore."

In a little over seven hours we cover about seven miles, and stop for the night at Rubicon Springs, a campground that has been hosting weary travelers on the trail since 1869 when George and John Hunsaker built a cabin here and opened a shopping station called Hunsaker Springs. We indulge in the three Bs: beer, beef and bonfire. Then bed.

The next morning, with the sun quickly climbing over the pines, and the Jeep's 284 hp V6 gaining warmth, I load up our gear and examine the damage. Incredibly the Wrangler has taken the punches without so much as a fat lip. The rear fender flare is mildly scraped along its lower edge, and there's some bruising on the underside of the rear bumper, which touched down several more times throughout the day. But that's it. There isn't even a scratch on the rock sliders, which have kissed rock more times than I could count.

Inside, it's another story. We've been running our two-door Wrangler Rubicon with the top folded back and it doors removed, and its interior, like our throats and nasal cavities, is now coated in several layers of fine silt. Screw it, we crank out the four-bolts and drop the windshield, securing it to the hood with supplied straps to keep it from bouncing around.

We roll out toward Cadillac Hill and make the climb easily with the Jeep's sway bar disconnected and its front and rear diffs locked. On the less severe sections, the Wrangler basically crawls itself over the obstacles in second gear. We just steer and let the tires do the work. Observation Point on the other side is a rich reward for the effort, with panoramic views in all directions including the Tahoe and Eldorado National Forests. Incredible.

By noon we're approaching Miller Lake and the Rubicon becomes more dirt road than rock trail for its final few miles. We're able to run through the dust at between 3-5 mph, which drives up our average speed considerably. And then it's over, as the Jeep's tires touch blacktop for the first time in two days. According to the Jeep's trip computer we covered 16 total miles in 12 hours, 41 minutes and 22 seconds. And honestly it was easy, even for an off-road neophyte like me. The new 2018 Wrangler Rubicon is that good.

I'm told the other two Wrangler models, the Sport and the Sahara, will make it from one end of the Rubicon to the other, only at a much slower pace. And serious body damage would be inevitable considering neither has the Rubicon's rock sliders, ground clearance, locking diffs, swaybar disconnect system or tall tires. But then you have to consider that man has been driving vehicles from one end of this "road" to the other since before Prohibition, and everything from Model Ts to army surplus flat-fender Jeeps have made it through, many driven during the night.

Jeep's Wrangler has never been more popular. With the possible exception of the Toyota 4Runner, which has an independent front suspension, it's basically without competition in the market, and Jeep is taking full advantage of its monopoly. The new JL Wrangler has been a huge success and its rollout is still picking up steam with introductions of the turbocharged 2.0-liter engine, a diesel V6 and the new power folding top. This year Jeep will sell over 200,000 Wranglers, 90 percent of them four-door Unlimiteds. And next year, the highly anticipated JT or the Jeep pickup truck, which is Wrangler-based, will finally hit the road, and no doubt the Rubicon. 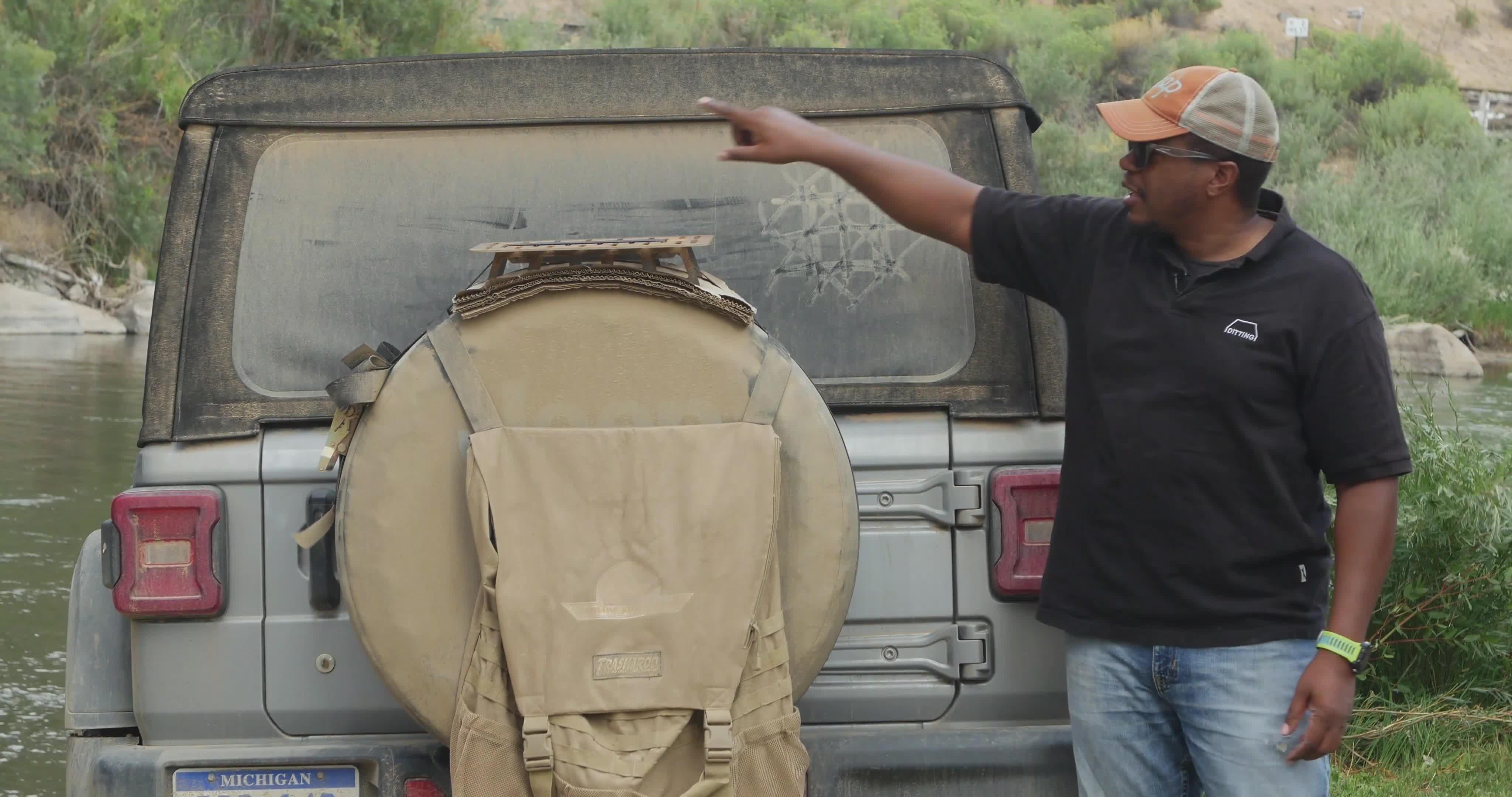