The kids are alright: Gen-X, Boomers, Millennials use phones more

James Riswick
Don't blame the kids. According to a survey conducted by The Harris Poll and commissioned by Volvo, the youngest and newest drivers on the road are less likely to use their phones while driving. Only 71 percent of survey takers belonging to Gen-Z, or whatever those currently aged 18 to 24 will eventually be called, admitted to using them. That's actually a bit less than younger Baby Boomers (72 percent) and considerably lower than the evil Millennial scourge and Gen-X (both 81 percent).

The Gen-X bit is particularly interesting since they are most likely to be the parents of those Gen-Zers. According to the survey, parents with children under the age of 18 are among the most likely to use their phones while driving – be it alone or with someone else aboard. A significant 62 percent of parents admitted to using their phones while their kids are in the car, with 32 percent saying they do so often. No matter the scenario it seems, parents are the most likely to be distracted when behind the wheel by their mobile devices. The fact that Millennials are distracted overall to a similar degree shouldn't be surprising, therefore, as they are also likely to be parents (older Millennials are deep in their 30s, after all, as I'm reminded every single day).

That the Gen-Zers are using their smartphones less while driving is certainly encouraging, as is the finding that they are generally more concerned about their phones being a distraction to their overall lives. On the other hand, the fact that aging Baby Boomers are being so widely distracted by their smartphones should terrify us all and make us thankful that so many cars now come standard with automated accident avoidance tech. 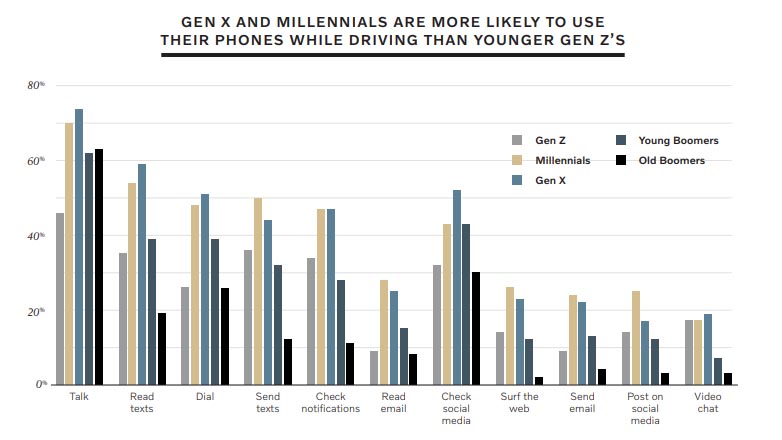 Now, in terms of what they're doing on their phones, the most common activity for all generations is talking on the phone. This is followed by reading texts and dialing a phone call. Gen-X is the most guilty of these. Millenials are most guilty of sending texts, but when it comes to checking social media (arguably the most distracting of these activities), Gen-X far outpaces all others and the younger Baby Boomers match the Millennials. Gen-Z is barely higher than old Boomers.

One more take away: 33 percent of Americans drive in silence to minimize distractions. What a fun ride that would be.