The steering and suspension tweaks improve control and composure

Scott Oldham
E21. E30. E36. E46. E90. F30. To the most people, it's nothing but alphanumeric gibberish. Read them off to my mother and she would probably stand up and yell, "Bingo!" But car guys, real car guys, know these numbers well –- the six generations of the legendary BMW 3 Series. And the seventh, chassis code G20, is about to hit.

I haven't actually seen the new G20. The 330i prototype that I'm driving is completely camouflaged from bumper to bumper to keep competitors guessing and spy photographers frustrated, although there's probably a twin-kidney grille and a Hofmeister kink under there somewhere. Thick cloth covers the majority of the interior controls with cutouts for the gauges, shifter and other essentials. The fit and finish are better than many other mules I've driven. Even the black electrical tape wrapped around the air conditioning vents is artistically applied.

Leaving BMW's M Test Center outside the Nürburgring, I begin to get a feel for the car. The new gauges have gone digital as in the new 5 Series, and the speedometer, which tops out at 161 mph, and the 7,000-rpm tach are no longer round. BMW has also borrowed a little pizzazz from Aston Martin, giving the tach a counterclockwise sweep. Other changes include the moving of the engine Start button to the console and new seats, which are well-shaped and sufficiently bolstered.

Jos van As, BMW's head of Application Driving Dynamics, says development began in 2014 and the Driving Dynamics team has logged several hundred thousand test miles tuning the G20's chassis, in eight countries and at four racetracks. This includes 10 trips to the Nürburgring, where they have driven the car 20,000 miles on the north loop. "Our goal is to make a small improvement in comfort, but the focus is driving dynamics," he says. 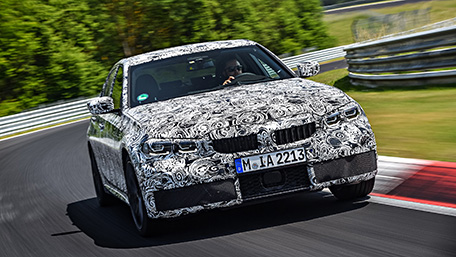 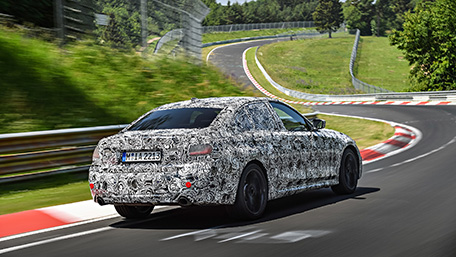 A 50/50 weight distribution has been retained. The sedan has also lost about 120 pounds and its center of gravity has been lowered 0.4 inch. None of which was easy to come by, as the G20 is slightly larger than the F30 in every dimension, including wheelbase.

To achieve that balance, the engine is still set as far back in the chassis as possible. "Any further back and we would have to move the driver's seat," says engineer Robert Rothmiller. They have also changed the front subframe from steel to aluminum and they've widened it, along with the A-arms. Both the front and rear tracks are now 1.2 inches wider, which matches the track width of the current 4 Series Gran Coupe, but there are no carryover parts from that model. The chassis is stiffer, too, with the strength of the front strut mounts increasing an incredible 50 percent.

But the team still has work to do. Members are still making changes to the electric steering system and fine-tuning the suspensions bushings and other components. Tweaking the steering can be done on the fly. With engineer Mischa Bachmann riding shotgun with his laptop, I push the car through the German countryside, navigating the hilly, twisty and narrow two-lanes. Turn in is sharper than it is in the F30, and the sedan is soaking up mid-corner bumps brilliantly. I can tell in just a few miles that this is an easy car to drive quickly.

The Active Front Steering system, which everyone hated, has been tossed. The steering ratio is variable and the range feels right. There's also good feel from the front tires (Michelin Pilot Sport 4 S sized 225/40R19 front and 255/35R19 rear), but the initial effort is a little light, and there's too much damping. 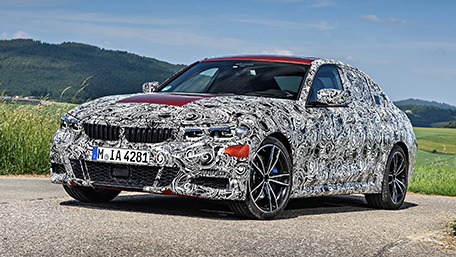 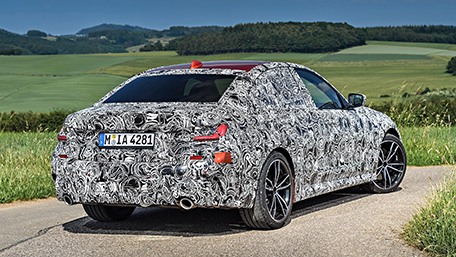 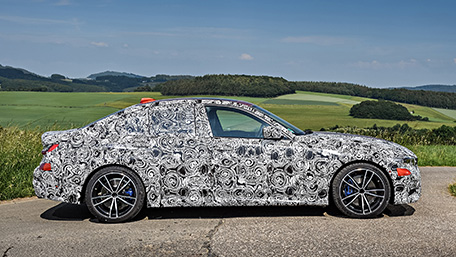 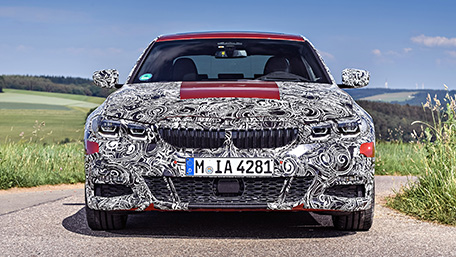 Bachmann strokes his keyboard, "How's that?" he asks. Suddenly, the steering is heavier, and there's even more damping. "Not good," I say, bending the sedan into a tight left-hander. "Now it feels like Grand Turismo." He taps a few keys. Now there's less damping, which gives it more consistent effort. "Better," I say. "But too heavy. Can you lighten it up?" He does, but I'm still not satisfied.

I've been driving like an enthusiast, hustling the car, both hands on the wheel, my thumbs on its leather-wrapped spokes. Bachman says something like, "You're driving too much like an expert. Put one hand at the top of the wheel and tell me if it feels different." I'm surprised by the request, but comply, slowing to a mellow pace, my left hand at 12 o'clock and my right elbow resting on the console. He strokes a few keys. "Now what do you think?" he asks.

I can tell he added damping and returned the effort to the original level. And it does feel better than before. "Ha," I say. "I guess this is the way most Americans drive. I just didn't realize you tuned for it." He smiles. 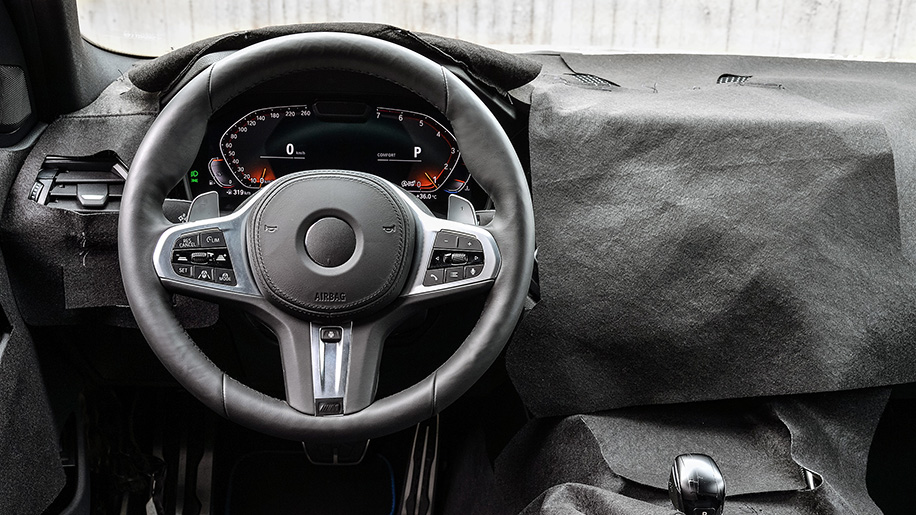 Retuned, its turbocharged 2.0-liter four now burns 5 percent less fuel despite gaining 7 hp and 37 lb-ft of torque. With 255 hp and 295 lb-ft, it's strong and revs quickly at wide-open throttle, with the eight-speed automatic changing gears just before seven grand. BMW is still pumping engine sounds into the cabin through the speakers, and they're amplified in Sport and Sport Plus modes, but the engine note isn't as organic as it should be.

At 125 mph, on an open stretch of the Autobahn, the G20 is stable and quiet. I reach down and click it into Sport Plus mode, which tightens the throttle response, retunes the transmission to hold gears longer and adds a bit more steering effort on center. But it does not change the suspension settings. Without the Adaptive M Suspension option, they are fixed. The spring rates of the sport suspension have been increased 12 percent, while the spring rates of the base suspension will remain essentially unchanged. This has doubled the gap between the two. This is also the first time the sport suspension gets its own bushings.

Suspension travel is still 7.9 inches in total at each corner, but there's a very slight increase in sway bar stiffness, as well as new dampers. Gone is the internal spring stop system in the last 2 inches of shock travel (rebound in the front at full droop and compression in the rear), replaced with a hydraulic stop system that smooths damping and improves body control with the help of new, more acutely tuned bumpstops. It doesn't ride harshly, but some American soccer moms may find the new tuning to be too firm, which I believe is the point.

Throttle on the carpet, with the speedometer passing 137 mph, I ask engineer Thomas Kafer, "How fast will it go?" He lies. "Two fifty [kilometers per hour, or 155 mph]," he says. At 147 mph, the transmission upshifts to sixth gear, and the turbocharged four-cylinder keeps pulling the sedan down the road, past 155, now just past 160 mph, with the tach reading 6,500 rpm, the G20 has no more to give. It's steady as can be. 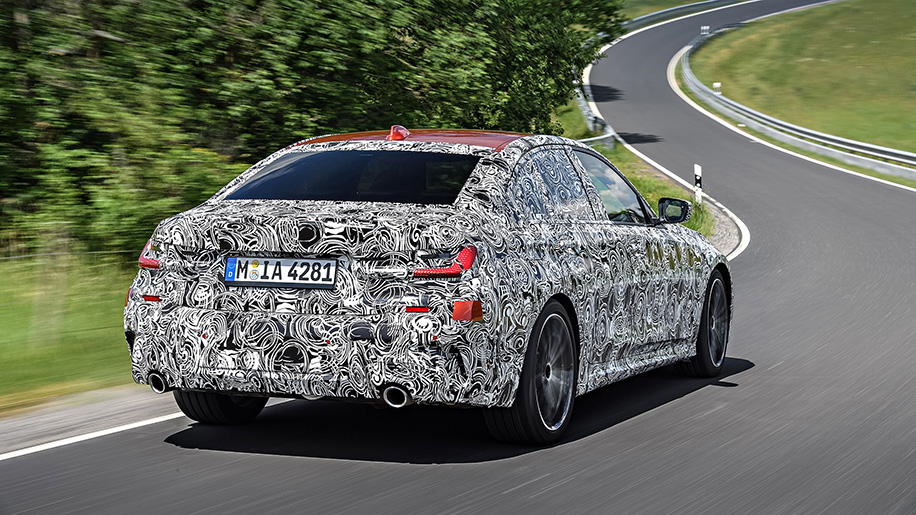 Two hours later I'm chasing Kafer around The Green Hell. His more powerful M2 is pulling away on the uphill sections, but I push myself to commit into the Nürburgring's blind off-camber corners and through its severe elevation changes, and the 330i is kinda keeping up. The new suspension damping is miraculous, never losing composure, even in the bumpy Carraciola-Karussell and at the bottom of Fuchsrohre, which compresses the chassis violently and loads it to the right in fifth gear. The brakes are also easy to modulate going into Adenauer Forst, a tight left-hander I always get wrong.

Tweaks to the rear suspension geometry have reduced toe and camber changes throughout the stroke to lessen understeer, and the G20 is well balanced. It feels better the faster you go, and the stability control system works in the background, unobtrusively, keeping the car on line when I overcook an entry.

This is a more dynamic 3 Series. And that's good for BMW. The model remains its highest seller globally year after year, as well as the spiritual and metaphysical criterions of the company. "It's the core and heart of the brand," says Kai Lichte of BMW Communications. "The most important model in the line."

After its debut at the Paris Auto Show in October, the G20 will go on sale in the United States as the 2019 330i in the spring of next year. The 340i will hit dealers months later as a 2020 model, followed by xDrive models, a plug-in hybrid and a wagon. And then of course there will be a new M3.
Bingo.