A reminder never to drive into floodwaters

Heavy rains fell overnight from central New York state south through eastern North Carolina, where the National Weather Service forecast that a fresh round of downpours could cause more flooding. Eastern Virginia and Pennsylvania were also hard hit.


NEVER go into flood waters. It doesn't take much water to sweep away a person or vehicle, and water can damage or wash away the underlying road -- creating unseen hazards.

Over half of flood fatalities occur in vehicles. Many of the rest were people near or in floodwaters. pic.twitter.com/pPh9D1OqEd

"NEVER go into flood waters," the National Weather Service's Weather Prediction Center said on Twitter. "It doesn't take much water to sweep away a person or vehicle, and water can damage or wash away the underlying road — creating unseen hazards."

Authorities closed highways and roads in parts of Maryland, Pennsylvania and Virginia because of flooding.

"With the rainfall we have seen over the last week, the ground is very saturated, so any additional rainfall we receive, especially heavy, really has nowhere to go, resulting in flooding," said National Weather Service meteorologist Brandon Fling.

Up to 14 inches (36 cm) of rain has fallen along the U.S. East Coast since Saturday, swelling waterways well above flood levels.

Local news video showed water streaming into homes and businesses in some places and reaching the tops of automobiles as rescue crews worked to save motorists. 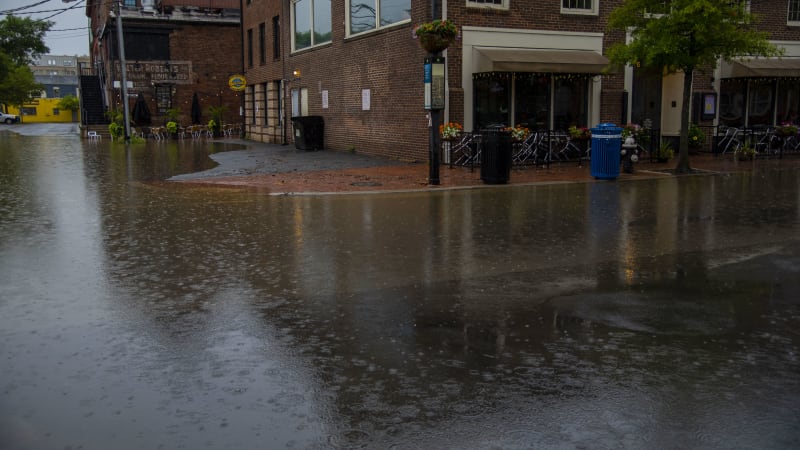 "It just happened out of nowhere, and next thing my car was just shut off, and I'm like, 'What do I do now?'"
​​​​​​Zachary Reichert told NBC News after being rescued from his flooded Jeep in Schuylkill County, Pennsylvania. "I can't swim in the first place, so I wasn't jumping into those waters."

Hersheypark, the Pennsylvania amusement park, said it would be closed on Wednesday after the town surrounding it issued a disaster declaration. It also was closed on Monday.

Airports in New York and Philadelphia reported delays of more than an hour, according to Federal Aviation Administration.

> RELATED: 12 tips to tell if you're buying a flood-damaged used car

The downpours were expected to continue as at least a chance of rain was in the forecast for the area for several more days.

Separately, parts of northwestern Colorado were drenched with rain on Wednesday morning, where officials warned of flash flooding and debris in an area recently scarred by wildfires.