Long and smoky, with plenty of revs and a snappy clutch dump — this obviously wasn't the first time Gary Patterson has boiled the baloneys on a high-powered Mustang. The president of Shelby American street-raced a 428 Cobra Jet fastback all over Ohio in the 1970s, so we shouldn't have been so surprised when he jumped into the company's new 1967 Shelby GT500 Super Snake, the reincarnation of Shelby's GT40-powered Mustang, and lit 'em up for our cameras.

Shelby will build 10 new 1967 Shelby GT500 Super Snakes and sell them for $249,995 each. It's the latest in the company's growing continuation series, which also includes brand-new 1968 GT500KR convertibles and the Original Venice Crew 1965 GT350 Competition Mustangs. The 10 continuation Super Snakes will be built by Legendary GT Continuation Cars in Roaring Spring, Pennsylvania, with engines supplied by the Carroll Shelby Engine Co. The cars are faithful to the original, but the engine specs have been tweaked for better drivability.

The original GT500 Super Snake, and there is only one, was built in early 1967 to test and promote Goodyear's new Thunderbolt tire. Shelby was also the California distributor for Goodyear, so the tire company asked him to build a special car for high-speed testing at its five-mile long oval in San Angelo, Texas. 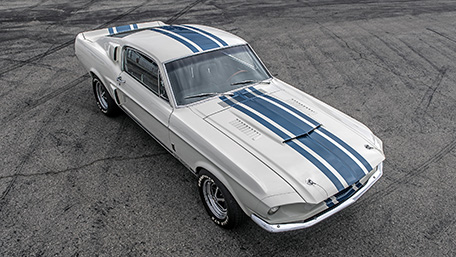 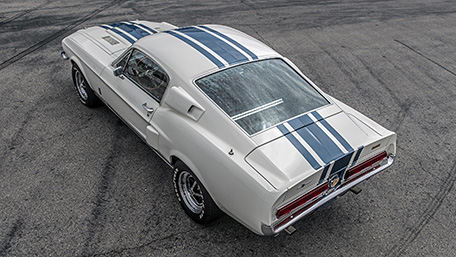 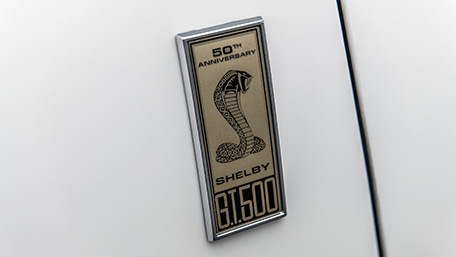 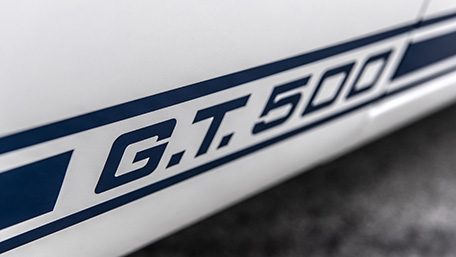 Under Carroll Shelby's instructions, the company's chief engineer — Fred Goodell, who was on loan from Ford — walked through Shelby's facility in a hangar at Los Angeles International Airport and randomly chose a white GT500 for the build, serial number 67402F4A00544. The Mustang's dual quad 428-cubic-inch engine was replaced with a medium riser Mark II 427 from a GT40 race car with a solid cam, a single 780 cfm Holley carburetor and special set of headers with a "bundle of snakes" design. Shelby American's former sales manager Don McCain has been quoted as saying the engine was "the mother of all 427s at the time ... aluminum heads, aluminum water pump, forged crank, Le Mans rods, just basically everything inside the engine was built to run sustained 6,000 rpm to race at Le Mans."

Goodell also added heavy-duty front disc brakes, a Detroit Locker rear end, traction bars, a redesigned grille for additional cooling and unique triple stripes on the Mustang's hood, roof and deck lid. He also installed a set of tall 2.73 rear gears to maximize the fastback's top speed. At the track, a set of Shelby 10-spoke wheels and of course a set of Goodyear Thunderbolts, complete with whitewalls, were fitted.

In Goodyear's promotional video of the test, which is on YouTube, the engine is said to make 650 hp, but the real number was around 520 hp. Regardless, Shelby personally took the Super Snake around the track at 170 mph, gave the editors of Time and Life rides they certainly never forgot, and then turned the car and his helmet over to Goodell, who drove the Mustang to an average of 142 mph for 500 miles. 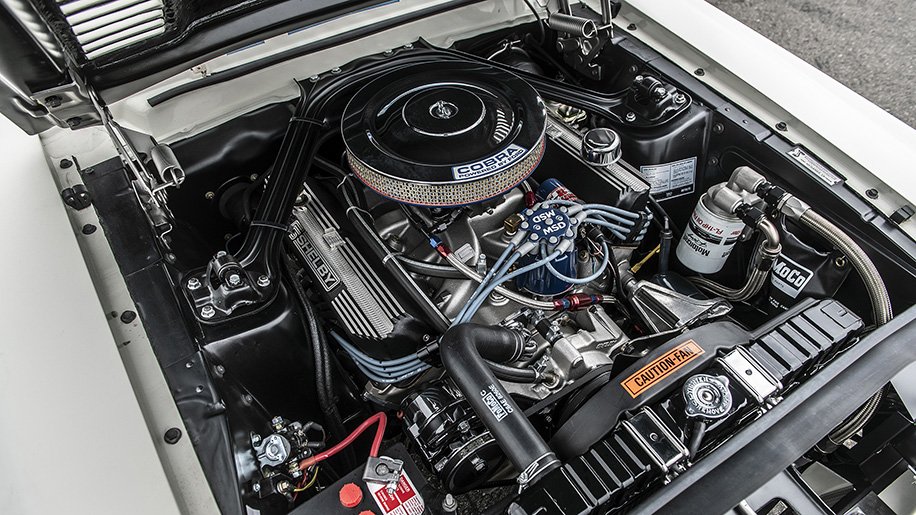 After the test, McCain almost persuaded Shelby to produce 50 similar 427-powered GT500s, but at $7,500 a piece, the Super Snakes were just too expensive. So the one and only was sold for $5,000 and has now become a prized piece of Shelby history last selling at Mecum's 2013 Indianapolis auction for $1.3 million ( also on YouTube).

Under the fiberglass hood is an all-aluminum 427 FE, which is 100 pounds lighter than the original iron block, with cross-bolt mains for strength, a hydraulic roller cam, a set of Doug's headers, a Holley Black Ultra HP carburetor and 10.5:1 compression ratio so it runs well on today's pump gas. Shelby says it's making 550 hp. There's also a Toploader four-speed and a 9-inch rear end, just as the original Super Snake, but the rear gears are a more street-friendly 3.50 ratio. The only other hardware changes are the tires, although they're still 15-inch and mounted to a set of Shelby Magstar wheels, and the grille, which is now polished instead of black in a subtle attempt to distinguish the cars from the original.

Barry Smith, the owner of Legendary GT Continuation Cars, bought a Lime Gold 1967 GT500 new off the showroom floor when he was 21 years old. "I really wanted a Cobra," he says. "But it was too much money. I paid $4,300 for the Mustang." Smith still owns that Mustang today along with a couple of hundred other classic Fords and Shelbys, including more than a few Cobras. Smith knows how these cars should look and feel, and the build quality of the Super Snake, which undergoes a body-off rotisserie restoration, is right on. 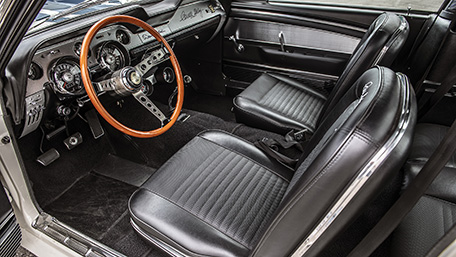 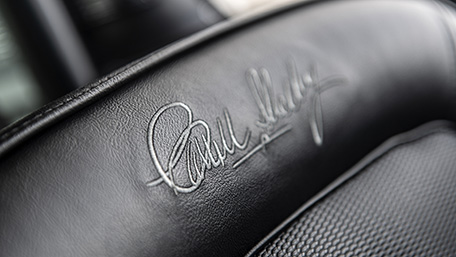 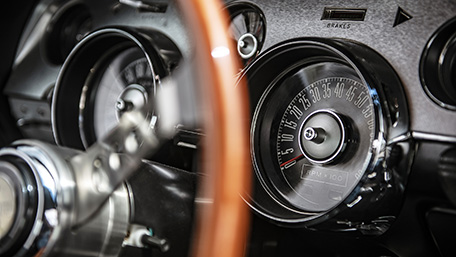 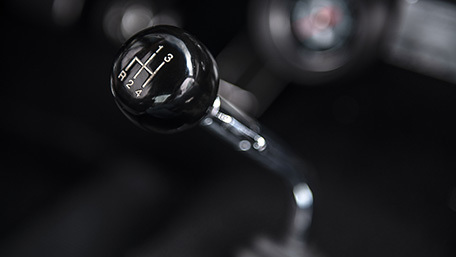 With hot chunks of its modern Goodyear radials still smoldering on the Mustang's Wimbledon White quarter panels, Patterson climbs from the driver's seat and hands me the key. The engine fires up with a single twist of the ignition, and its rumble rocks the Mustang on its suspension. The seating position is tall and arms out. And the wood-rimmed steering wheel, with its glossy finish and brushed stainless spokes, each with four chamfered holes, is a work of art. Just ask Steve McQueen, who requested that one be fitted to Frank Bullitt's Highland Green pony. Used for one year-only on GT500s and GT350s, original wheels now cost up to $7,000 if you can find one. This is a faithful reproduction.

Considering the big-block is making about 500 lb-ft of torque, the clutch is lighter than you would expect. The steering is slow with a 16:1 ratio, but it's power assisted and nicely weighted. Responsive too, without any of that old-car "play." Looking out over the scooped hood and blue stripes, and with Patterson riding shotgun, I run it though the gears down Figueroa Street, past the old Datsun/ Nissan North American headquarters. The stock Ford shifter is a bit sloppy with long throws — it's no wonder everyone installed a Hurst Shifter back in the day — but the power-assisted brakes are solid and easy to modulate.

This is a small car. Much smaller than a new Mustang, and it seems darn right compact compared to my 1969 Camaro. It feels narrow, and the driver's door tucks perfectly under my left armpit so I can easily assume the classic elbow-out cruising position. In 1967, Road & Track said the GT500's suspension was stiff and its ride extra-firm. Not by today's standards. In 2018, the Super Snake is softly sprung and its ride is supple. The Shelby feels solid. There are no squeaks and rattles, although you'd probably never hear them over the 427, which is constantly pumping out serious thunder from its 2.5-inch Flowmaster exhaust. 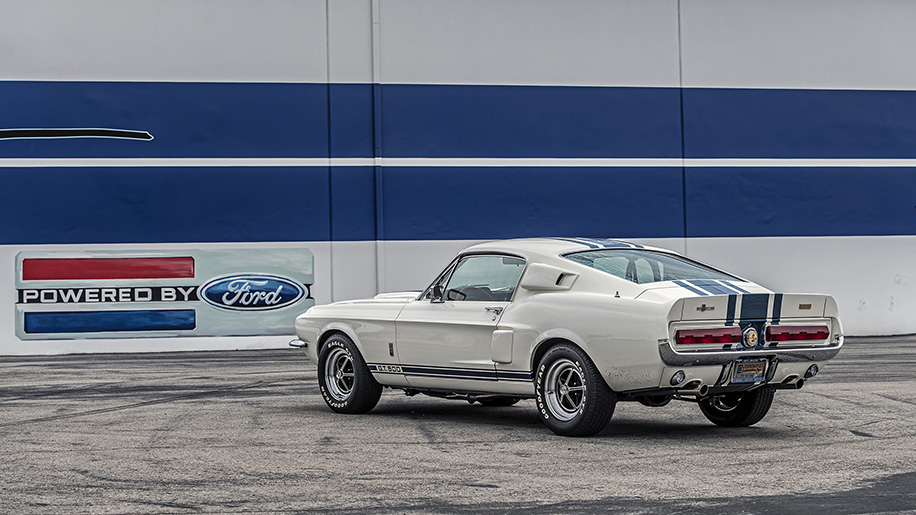 And it makes power everywhere. Everywhere. Jump on the throttle and it sautés the tires just off idle and keeps them burning through third gear. I shift it as quickly as I can at 6,000 rpm while steering with my left hand. The guy in the Prius isn't amused, but Patterson is enjoying the ride, and we get thumbs up from some kids in a minivan.

Despite the traction bars, there is some wheelhop, but the Super Snake is a blast to drive. And it feels genuinely quick. Much quicker than the 15.0-second quarter mile recorded by Car and Driver in a 428-powered GT500 in 1967 (it had a three-speed automatic). If it hooks up, the Super Snake would probably run in the low 13s, however, the buyers forking over a quarter-million dollars for these cars probably won't be taking them to the drag strip. A three-speed automatic is optional if you're so inclined.

As we head back to Shelby's facility in Gardena where Team Shelby is preparing for its inaugural Drive-In Movie Night and a screening of "Bullitt," which is celebrating its 50th anniversary, its drivability is also impressive. I've been cruising around Los Angeles for 45 minutes, the Shelby's engine is tractable, it stays cool, and it doesn't feel at all finicky. If it had air conditioning, I'd gladly drive it to Vegas — no, make that San Francisco.