While a decent city car, it is held back by noise, sluggishness and twitchy handling on the highway. Fuel economy leaves something to be desired, too.

6.5
View All Specs
Add a Review
BIRMINGHAM, Mich. — The rest of the world is already familiar with the Ford EcoSport. Now the small crossover is available to U.S. customers for the first time. Incidentally, it's the first car built in India to be sold here. As Ford begins to lean more heavily on its crossovers at a time when it plans to discontinue most of its cars, the EcoSport is the most diminutive in its lineup. It's available with two engine options: a 1.0-liter three-cylinder Ecoboost, and a naturally aspirated 2.0-liter. Front- and all-wheel-drive versions are available, each with a six-speed automatic transmission. Our tester was a 2.0-liter EcoSport SES with all-wheel drive, and it spent a week at the Autoblog office as we got to see how it fared in real-world driving conditions.

Despite being new here, the EcoSport looks familiar, almost like a baby Ford Escape. It's a handsome little crossover with a stable appearance, thanks to the wheels pushed far to the corners. From a distance, it looks bigger than it is, and we were a little surprised how easily we could see over its roof as we approached it. In the parking lot, it blends right in with the copious other crossovers (mostly American ones here in Detroit) of various sizes.

Ducking inside, it's more obvious that it's small, but we instantly noticed that the interior feels fresh and lively despite a lot of plastic. The swathes of black were broken up here and there by orange accents, like the matte plastic insert on the passenger-side dash. We particularly enjoyed the orange stripe pattern on the seats of our tester (which actually sported a white exterior).

Right away, we got to poking around the eight-inch central touchscreen. Sync 3 comes standard on all but the S trim level, and it is great. It's something that a lot of cars just can't nail down. Sync 3 is clear, simple, and responsive, this is a great interface to use. We've sampled this version of Sync in a number of vehicles of late, and each has been a pleasure. We're glad to see it in the EcoSport. 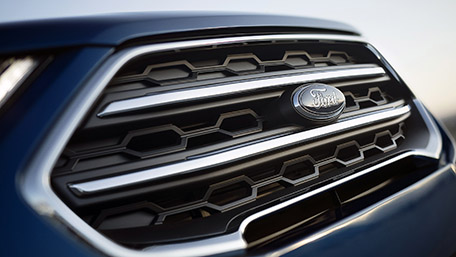 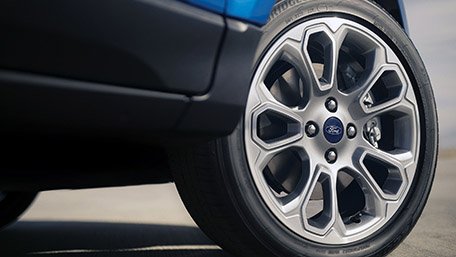 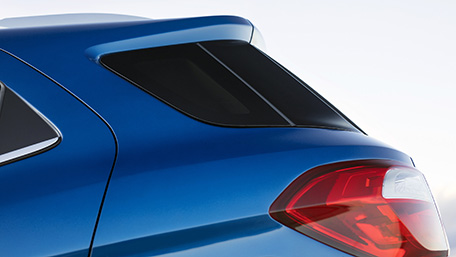 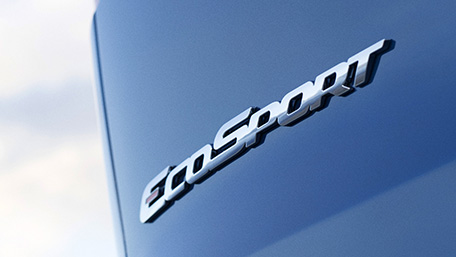 We had mixed feelings about the EcoSport's "motorized barstool seating position," as Associate Editor Joel Stocksdale calls it. It feels a little unnatural to sit so upright in a vehicle this small, but maybe it improves our posture. It's also not uncommon in the compact crossover segment, making a small crossover feel taller than it actually is, at least from the driver's seat.

The front seat is a far better place to spend time than the second row, though. The legroom there is nearly nonexistent. The rising beltline also means there's not a lot of glass to bring in light, which didn't give us much hope for the cargo area.

At the back of the vehicle, we stood for about two minutes, looking and groping at the tailgate in search of a handle with which to open it. Finally, we spotted a small asymmetry, and there was the handle, hidden cleverly in the right rear lighting. We pulled up to find the door swing open laterally, while our memory simultaneously recalled, "Oh yeah, this thing opens sideways."

The gate opened to a surprisingly roomy and useful looking cargo area. With the rear seats up, there's 21 cubic feet of space — enough for a nice pre-barbeque grocery haul. Put those useless rear seats down, and there's 50 cubic feet of space, which is more than the Chevy Trax, about on par with the Jeep Renegade, but considerably less than the Honda HR-V. We'd have no trouble loading up the dogs and a long weekend's worth of luggage and toys for a quick getaway, but we'd have to leave the kid behind. 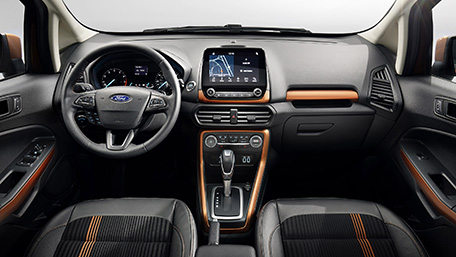 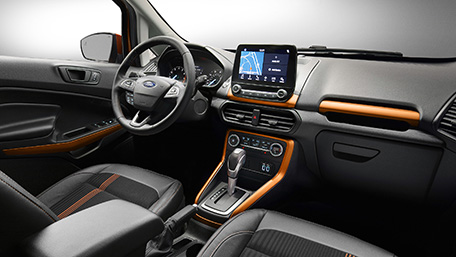 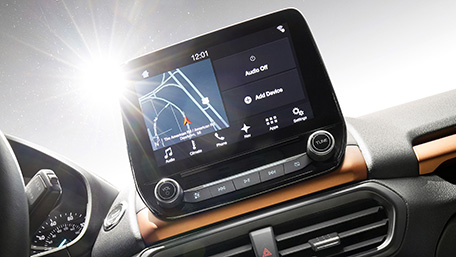 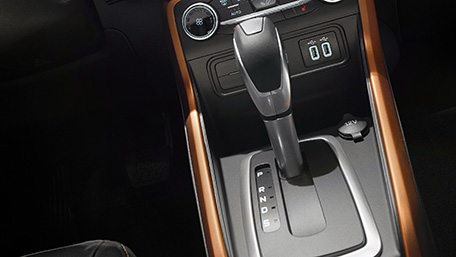 Driving through the city, the lack of power (more on that shortly) is almost overcome by the EcoSport's nimbleness. The steering ,responsive to the point of being almost twitchy, is worthy of praise. We like the balance of heft that builds up the further from center you turn it — and it makes the EcoSport entertaining fun to drive around town. Low speed cornering won't throw it off balance, so saw away at the wheel.

On the flip side, high-speed cornering is less confident. On the on- and off-ramps, we dialed back our speed about 20 percent more than we would in other similarly sized vehicles due to lean exacerbated by the upright seating position. High-speed cruising requires a lot of course corrections. If there was ever a car that could benefit from a lane-keeping assistance system, this is it.

Changing lanes at highway speeds is a cinch, though, and it's easy to dart this thing through congestion. Responsive steering and good visibility means we had plenty of confidence hopping into gaps with a flick of the wheel.

Our biggest complaint — an anemic powertrain — revealed itself while driving the EcoSport on the highway. The little 2.0-liter engine really struggles to get the car up to speed. We counted off a slow 10 count getting this thing up to 60 miles per hour from a stop. The coarseness of the engine note under hard acceleration makes it feel even longer. If traffic is flowing well, the harsh engine noise continues as the EcoSport struggles to match pace with other cars on the road. The six-speed automatic downshifts with little provocation, which is certainly necessary for response, but not great for in-car conversation. At steady speed, the engine drones tediously. We'd have loved to have another gear or two for this car to work with, for less frequent shifts and lower cruising revs. 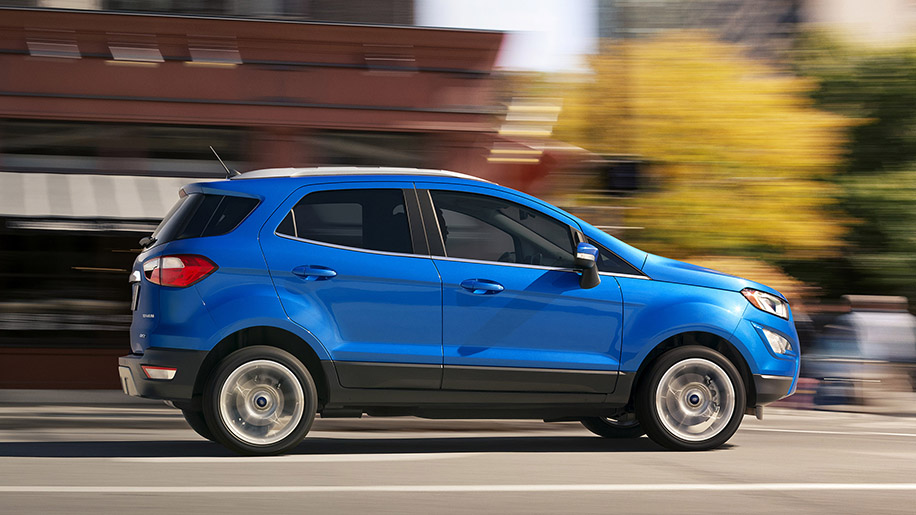 Let's pause there and talk about the nameplate for a minute. "EcoSport" feels like a loaded moniker, a combination of "eco" and "sport." The "sport" part of the name feels like a misnomer. Perhaps Ford is in a similar school of thought to Nissan, where "sport" basically translates to "smaller," à la the Nissan Rogue Sport. If it refers to outright performance, it's not a term we'd apply to this small CUV. To be fair, we did enjoy the slow but spirited feel of the EcoSport around town.

The "Eco" part of the name also doesn't really seem to apply here. Ford insists the first two syllables are pronounced like the word "echo," which is confusing coming from the company that offers "EcoBoost" turbocharged engines (like the 1.0-liter engine available in the EcoSport). But "Eco" evokes green credentials, regardless of pronunciation.

The EcoSport's fuel economy figures aren't impressive on paper. The EcoSport AWD is rated at 23 mpg city, 29 mpg highway. Granted, this segment as a whole doesn't offer particularly satisfying fuel economy figures, but the EcoSport's main competitors (Chevy Trax, Honda HR-V, Jeep Renegade – all in AWD trim) all offer highway EPA mileage figures in the 30s. But in reality — at least for our time with the EcoSport — mileage is even worse. The majority of our driving took place on the highway, and we weren't able to crack an average of 24 mpg. Watching the fuel gauge needle move over the course of our 40-mille commute home was disheartening, especially considering that the rated fuel economy is only marginally better than a much larger Ford Edge with all-wheel drive.

Perhaps "Eco" is simply short for "economical," we thought. That wouldn't necessarily seem to be the case either. At a base price of $20,990 in the S trim level, the name fits. To upgrade from the very underpowered 123-horsepower 1.0-liter EcoBoost model, you need to drop $22,585 for an EcoSport S with the slightly less underpowered 2.0-liter engine (166 hp) and AWD. An SE FWD will run you $23,995, and the top-level SES AWD we tested ticks a lot of boxes, but costs $27,875. Ours also had an additional $595 tacked on for the White Platinum finish, plus another $500 for the Cold Weather Package, putting the total at $28,970. Yikes. 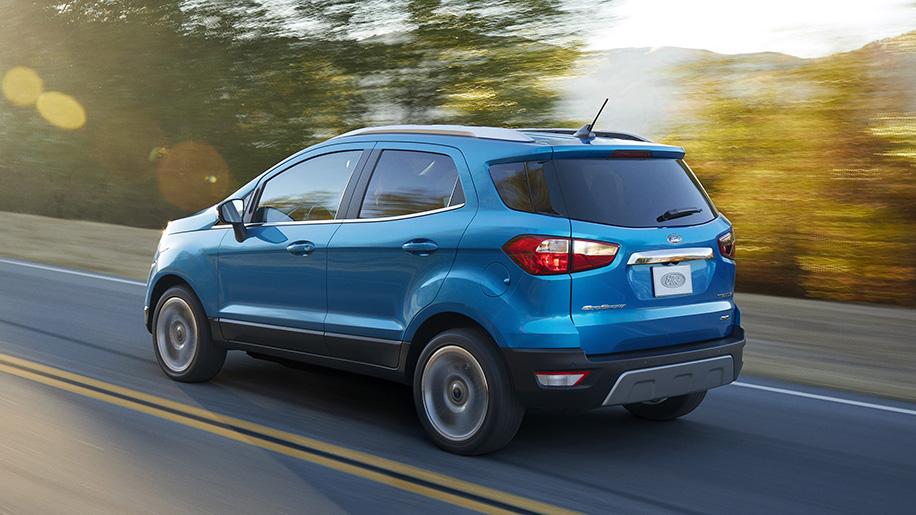 So "Eco" seems to just translate to "slow." Bummer. What would likely remedy most of our complaints about the EcoSport, though, would be a diesel engine. It just seems like it would be the perfect fit. The extra torque, lower revs and improved fuel mileage would all be welcome in this package. Plus it would suit the overall European feel of this Indian-built small crossover.

In casual office conversation about our EcoSport impressions, Associate Editor Joel Stocksdale seemed to agree with yours truly about many of the gripes noted above. Editor-in-Chief Greg Migliore, though, was a little surprised with our complaints about the car at first. Why the dissonance? Greg drove it chiefly on city streets, which is where the vehicle truly feels much more at home.

Which brings us to the essence of the EcoSport. This is not a car someone like this author would want to live with here in Michigan, though, where frequent weekend getaways require covering hundreds of miles each way. It's a great vehicle for, say, a young city-dwelling couple and their dogs. In that way, it feels very European. It's small, nimble at low speeds, but has a good amount of room for cargo, if not for passengers. Combined with a fun interior and a great infotainment system, Ford's formula could be a winner for young, active urbanites.

For everyone else, it might make more sense to wait for Ford to revamp the model. Even though it's new to us, it's an aging model designed for other markets. Now that it's sold in the U.S., a new version will probably better cater to American tastes. 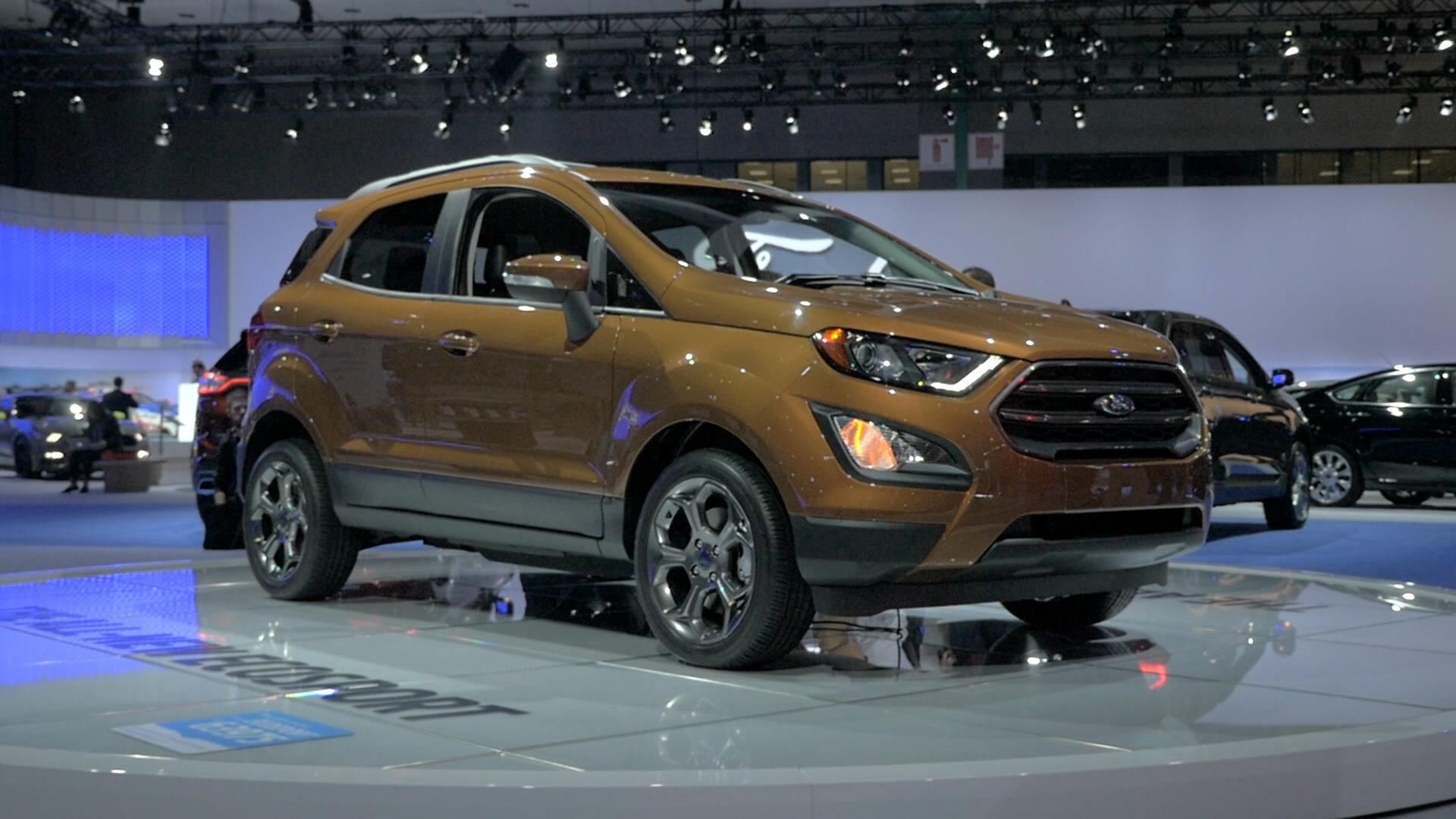 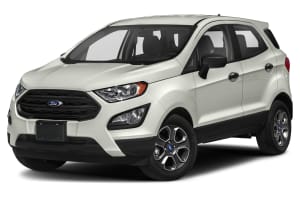