The track-only supercar competition just got a zillion degrees hotter

"We didn't benchmark anyone else," Brabham Automotive's director of technology and engineering, Paul Birch, explained to Autoblog at the reborn motorsport brand's exclusive BT62 supercar unveil in London last night. "We had finished our car by the time the McLaren Senna came out, and we're looking forward to their next car challenging ours," he added with a cheeky smile.

Why is he so confident the Senna can't match the BT62? In simple terms, it's because the 710 horsepower, 5.4-liter V8 Brabham BT62 is lighter than the Senna (2,143 vs. 2,641 pounds, dry weight), has a better power-to-weight ratio (730 hp vs. 668 hp per ton) and offers way more maximum downforce too (2,646 vs. 1,764 pounds). 0-62 mph times and top speeds aren't listed yet, but Brabham Automotive is positive that its first commercially-available car, has met its internal brief, which Birch confirmed was, "a GT racer without restrictions, aimed at endurance sports car racing."

The $1.4 million car (before local taxes and options) will take 7-10 months to build and is not road-legal. Brabham is instead seeking owners who want to improve their track day performance through individually-tailored driver programs which, through a high-tech software partnership with Microsoft, will be able to measure each customer's biometrics and even emotional racing health (as well as track times). The BT62 will be limited to 70 examples — to commemorate the 70th anniversary of Sir Jack Brabham starting his racing career in Australia back in 1948 — the first 35 of which will be painted with the livery of each of the 35 Grand Prix victories the Brabham team enjoyed in its 30 years of Formula One. A return to motorsport for Brabham is imminent too — perhaps as early as 2020 in the GT class at Le Mans — and a road-going version of the BT62 is also on the cards, plus other models to form a Brabham range. In charge of making this dream a financial success, commercial director Dan Marks told us, "This is only stage one, we've designed other models and I'm confident we'll sell all of these cars, either for the museum or the track."

Birch hopes most BT62 customers will be motivated by the latter. "The BT62 is all about lap times, so we'd like a high percentage of these cars to join our track days," he said. He remained tight-lipped about the designers behind the car though. "We had a number of people assist us," he conceded, "but the concept is that it's a Brabham. It was a collaborative effort led by the performance of the car, but we wanted a strong road-car aesthetic too." 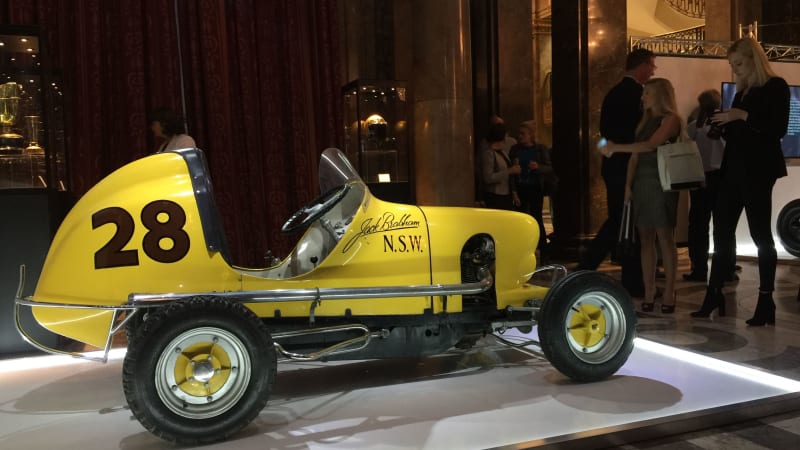 Given his father Jack's death in 2014, it was a particularly emotional evening for multiple Le Mans winner and new Brabham Automotive managing director David Brabham, surrounded by classic racing cars from Brabham's illustrious history in motorsport. In one corner there was the tiny yellow 1948-51 Australian Speedcar in which his father started his racing career and in front of the main stage sat the green BT24 in which his dad and Denny Hulme won the 1967 Formula One championship. Together with many other vehicles, plus numerous trophies, helmets and racing memorabilia displayed within the Great Exhibition Hall of Australia House in London (incidentally also used as film settings for both "Harry Potter and the Philosopher's Stone" and "Wonder Woman") it was quite an occasion, and location.

Visibly moved and holding back tears, he declared to the elegant crowd packed inside: "If my dad could have been here tonight, he would have been so proud. This is the start of the next chapter of the Brabham story."