AMSTERDAM – It's not every day when a test-drive includes picking up flowers from a nursery, or shuttling passengers from an international airport. Then again, it's not every day that Mercedes-Benz introduces a brand-new version of the Sprinter, the German automaker's workhorse utility van.

The 2019 Mercedes-Benz Sprinter represents a total reboot, both inside and out, with particular attention paid to adding safety features and tech upgrades not normally associated with the world of square-edged, work-duty vans. And while it's highly unlikely that a Sprinter customer cares much about design, one added bonus is that the latest model happens to be relatively good-looking, too. (Well, at least in the world of vans it is.)

A narrower grille, slimmer headlights and available LED exterior lighting add a touch of class to the Sprinter. Don't get us wrong, this is no AMG GT in terms of come-hither exterior design. But, believe it or not, during our test-drive in the Netherlands, which took us between Amsterdam and Rotterdam, the Sprinter got more than a few thumbs-up and nods of approval. Granted, they were all from dudes hauling plumbing supplies or gardening gear, but that's the target market here, folks. 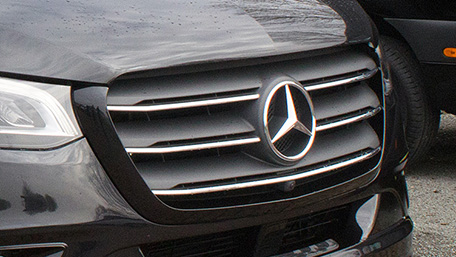 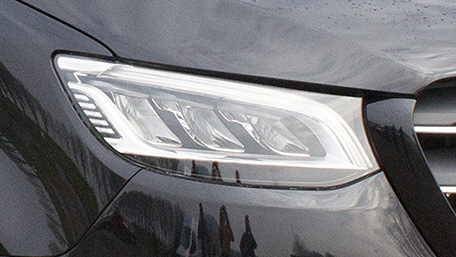 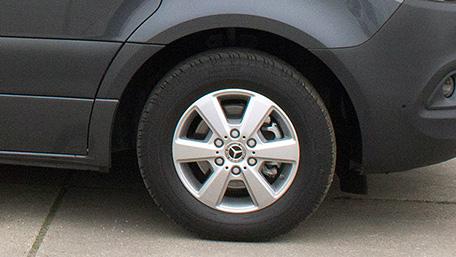 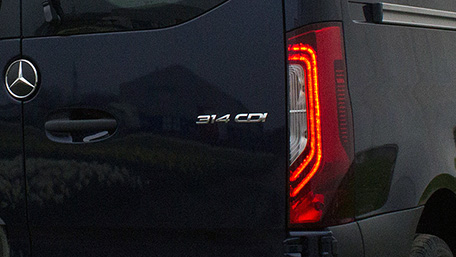 This also explains why the heck Mercedes hauled us – pun intended – across the Atlantic to drive a humble van. The Sprinter is very much a global machine, with more than 3 million sold worldwide since it first went on sale in 1995. This is officially the third-generation Sprinter, and it ushers in a wide range of technology and safety innovations, along with a cabin that's more customizable and an infotainment system far more aligned with some of Mercedes' true luxury vehicles.

In range-topping models, which were in ample supply during our drive, the dashboard is dominated by either a 7.0- or 10.3-inch touch screen. This wide screen sits upright from the dash and is within easy reach for either the driver or front passenger. This infotainment system handles everything from radio and navigation functions to a variety of voice commands that work with the Mercedes-Benz User Experience (MBUX, for short). Ironically, this system proved reluctant to cooperate with non-native English speakers, as proved during a demonstration by Mercedes-Benz engineers before we were let loose onto Dutch roads.

It's fair to say some fine-tuning of the system is needed ahead of the Sprinter's on-sale date later this year. That became especially obvious every time MBUX would chime in with a "How Can I Help You?" voice message, issued every time the word "Mercedes" was spoken in the cabin. Have you ever driven a car and had to whisper its manufacturer's name while behind the wheel? It's kind of creepy.

The rest of the interior technology is far less unnerving, thankfully. There are multiple USB outlets, available onboard Wi-Fi, 12-volt and 115-volt outlets and compatibility with Apple CarPlay and Android Auto. And don't worry, despite all the added tech and handy plug-in points, there are still plenty of cupholders for XL-sized caffeinated beverages. 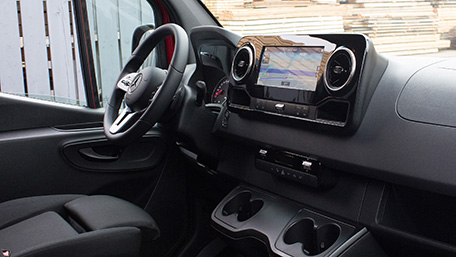 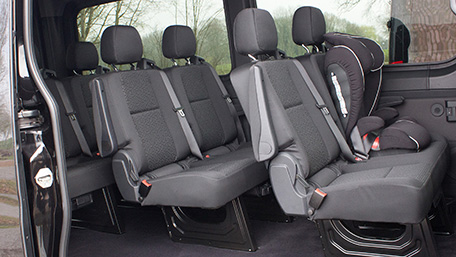 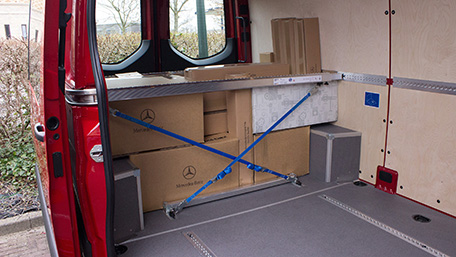 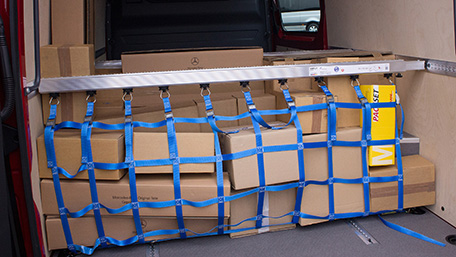 For fleet buyers, the available Mercedes PRO Connect system allows the careful tracking of each Sprinter, which includes everything from monitoring fluid levels and tire pressures to geo-location and knowing whether a window might have been left open. We put the app-based system to the test, by opening and closing the windows, or leaving the van unlocked, to see how long each change took to register. The answer: It's awfully quick (and pretty cool).

Granted, the same can't be said when it comes to straight-line acceleration. We tested two models, both diesels and in rear-wheel-drive format. The first was a 314 CDI model, a cargo van finished in Jupiter Red paint and powered by a 161-horsepower, 2.1-liter turbo-diesel four-cylinder coupled to a nine-speed automatic transmission. Later in the day, we tried a 319 CDI outfitted for passenger duty, complete with three rows of seating behind the front occupants. This high-sided people hauler is motivated by a larger, more powerful 188-hp, 3.0-liter turbo-diesel V6, mated to a seven-speed gearbox. The vans easily keep up with traffic and were well-behaved during extended drives, with only a faint amount of diesel noise in the background. Then again, quick merging and passing maneuvers require heavy usage of the gas pedal. It's better to relax and unwind while coming to terms that life in the middle- or right-hand lane of any multilane highway is the best place to be. Maybe this Zen-like Sprinter inspiration explains why Mercedes made the front seats so comfortable.

Sprinter vans in the United States will be offered with these two diesel engines, along with a gasoline-powered 188-hp, 2.0-liter turbocharged four-cylinder. We'll have a choice of rear- and all-wheel drive, though the front-wheel-drive model available in other markets will be a no-show stateside. The same is true for a manual gearbox, as Sprinter vans will be automatic-only here in the United States.

While we'd normally lament the loss of a shift-for-yourself option, it's no real sacrifice when talking about a large-scale van. Helping drive that point home were the intrepid journalists who insisted on trying the manual gearbox, then promptly got stuck in the same Rotterdam rush-hour traffic nightmare as the automatic-driving contingent. Guess who was much happier and more refreshed at the end of that particular drive? 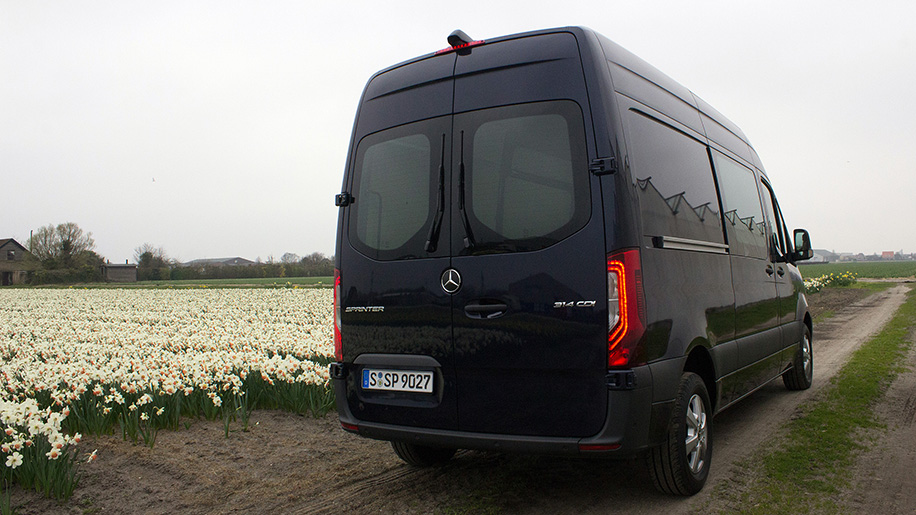 Credit also goes to the Sprinter's overall dimensions. Despite offering the same interior space as a typical Manhattan studio apartment, the Sprinter isn't particularly wide. That made navigating narrow European roads a simple task, even in busy city driving. The speed-sensitive electric power steering lets you place the Sprinter exactly where you want it and, dare we say it, even provides a hint of actual feedback. The Sprinter is incredibly easy to hop into and just drive.

It's now also easier to park, thanks to an available rear-view camera and 360-degree surround view. Other useful safety items include crosswind assist, to help the Sprinter maintain a steady course when being buffeted by wind, along with lane keeping assist, a driver-inattention monitor, blind-spot warning and even adaptive cruise control. Oh, yes, heated front seats and wireless phone charging make the options list, too. While those two items might not exactly save any lives, the dudes hauling plumbing supplies or gardening gear will definitely appreciate them.

Exact pricing and trim specification will be revealed closer to the Sprinter's on-sale date later this year. An electric-powered version, called the eSprinter, is also set to join the U.S. lineup at some point, most likely toward the latter half of 2019. 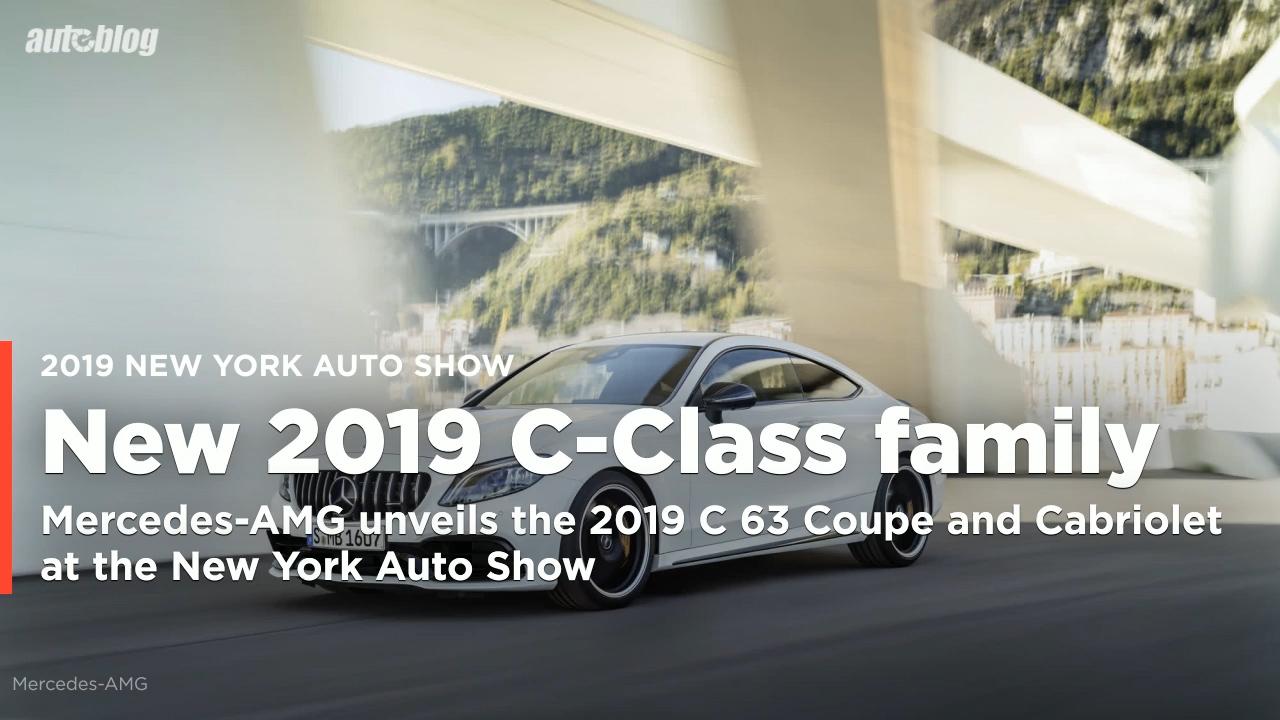