It can also be built into a Mack garbage truck

Joel Stocksdale
Lego has done it again: It has created yet another awesome automotive model kit that's calling out to our wallets. In this case, it's a Lego Technic kit of the Mack Anthem semi-truck. It's a particularly realistic-looking model, capturing the real truck's blocky exterior to a T, especially the bold vertical chrome bars in the grille. The tiny Mack bulldog hood ornament is a great touch, too. The interior is fully detailed, with seats and the horizontally oriented steering wheel.

But where the model really shines is with its more functional details. Lifting up the forward hinged hood reveals a tiny version of a Mack diesel inline-six engine. And when the truck moves, you can see the six little pistons moving up and down. Sure on the real thing you wouldn't be able to see the pistons moving because of the cylinder head, but we'll take the trade-off for the added fun. The wheels steer, of course, and they can be turned using a little knob on the back of the trailer for easy turning while pushing it around.

The trailer has a hitch that slides into the receiver at the back of the truck. It also has a support that flips down to keep it up when not attached. Most interesting is the flat bed trailer's elaborate cargo lift system. It has two large arms that drop down to provide extra stability to the trailer and truck. Large arms then lift up the container with chains and can then move over to drop it down onto the ground. 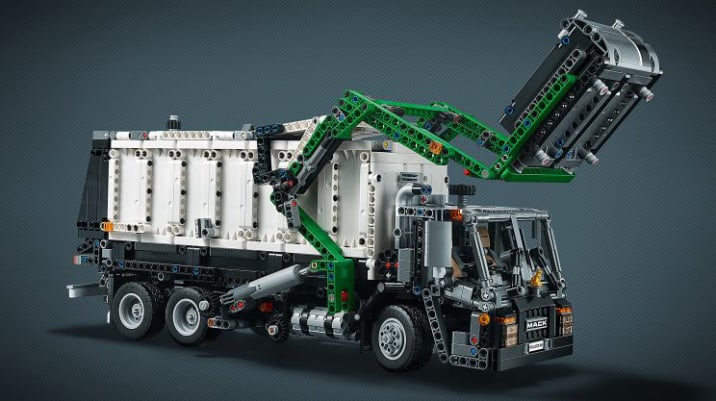 Then, if you ever get bored with the Mack Anthem, you can tear it all down and build another Mack truck. This kit allows you to build a Mack LR garbage truck and a big dumpster with the same parts. The resulting trash hauler has an opening rear hatch and forward trash door and a fully functional front lifting fork. The only downside is that you can't have both the semi-truck and the trash truck at the same time unless you buy two kits.

Speaking of buying kits, you'll need to fork over $179.99, not including shipping and tax, to make this Lego kit your own. That's not particularly cheap, but it is a pretty enormous kit with 2,595 pieces. Also it's awesome. Did we say that already?