We'll start with the facts, then go on a head trip. The facts are: Nissan Australia's been lobbying global HQ for a hot off-roady version of their local Nissan Navara pickup, one that can play in the same dunes as the Ford Ranger Raptor. Last week, Ashwani Gupta, the Renault-Nissan honcho for light commercial vehicles, flew to Oz to attend the launch of the standard Navara. While there, Motoring asked him about the chance of a super badass Navara. Gupta responded, "If you would had asked me this question yesterday ... I would have said this is not in our priority list. But if you are asking this question today, then I am saying this is an opportunity we would like to study."

Gupta said he needs to find out whether there's enough customer demand for a Raptor-fighting Navara, what kind of powertrain such a truck needs, and how long it would take to put that truck on the market. He admits that there's an evolving customer hunger for these kinds of vehicles, and said, "I think the transformation which we are seeing in the one-ton pickup market is driven by Australian voice." Australia is, after all, where there will soon be two pickup racing series, one on track and one in the dirt.

Sticking with the facts, Nissan has every tool necessary to get to work on the truck right now. The Navara is twinned with the Mercedes X-Class. The top engine in the new D23/NP300 Navara is a 2.3-liter four-cylinder with 188 horsepower and 331 pound-feet of torque; however, Mercedes offers a 3.0-litre turbo-diesel V6 in the X-Class with 257 hp and 406 lb-ft. Both Mercedes numbers beat the Ranger Raptor output, albeit at the expense of a larger, heavier lump of metal in the nose.

Mercedes also fits its pickup with a suspension 2.4 inches wider than that on the Navara. The Navara already has a solid rear axle and a five-link coil spring suspension in back, so a Mercedes swap and some fender flares. ... Or Gupta could turn to alliance partners Renault and Mitsubishi, tapping race divisions Renaultsport and Mitsubishi Ralliart for mechanical bits. Ralliart knows more than a few things about going fast in rough stuff, so Gupta wasn't lying when he said, "If we need to upgrade tough and smart Navara to the sports grade we can do it very easily." Having those three brands could also help make the case for the raging Navarra, if Mitsubishi Triton and Renault Alaskan pickup buyers also expressed interest. The Alaskan is a Navara spinoff, the Triton is not.

Now for the longshot head trip: In some universe, a desert racer Navara could pave the way to a U.S.-spec desert racer Nissan Frontier. It's not like Nissan hasn't toyed with a similar idea recently, with the Titan Warrior concept. Nissan's confirmed a new Frontier is on the way, the question is whether it'll be a U.S.-specific model or a localized version of the global Navara, the latter option feeding rumors for at least four years. If it's the latter, and if Australia got a stonking Navara, and considering how many wallets the Chevrolet Colorado ZR2 has opened and the Ranger Raptor will open, why wouldn't Nissan kick up some dirt, and profits, here, too? 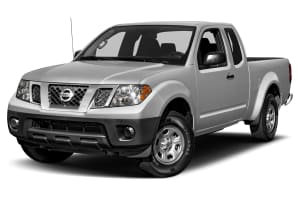