Nissan turned a Z into a snowmobile.

Reese Counts
WEST PINE CREEK, IDAHO — Nissan has an affinity for snow. A few years back, we blasted a trio of Winter Warrior concepts around some Midwestern ski slopes. Those Chicago Auto Show-bound crossovers were equal parts awesome and outlandish thanks to a set of four-wheel tracks, but 2018's sequel really takes things to a new level. At least that's the conclusion we came to after figuring out just the right moment to flat-foot the Nissan 370Zki concept out of a corner in the mountains of Eastern Idaho.

The 370Zki (pronounced 370 ski) is the end result of asking "what would happen if we turned a sports car into a snowmobile?" Simply put, Nissan took a standard 370Z Roadster and replaced the wheels with skis and four-foot long, 15-inch wide tracks from American Track Truck, the same supplier that equipped the Winter Warrior trio. They then tinted the headlights and covered the car in a bright orange wrap from Icon Image Graphics to make it pop against the backdrop of snow and evergreens. 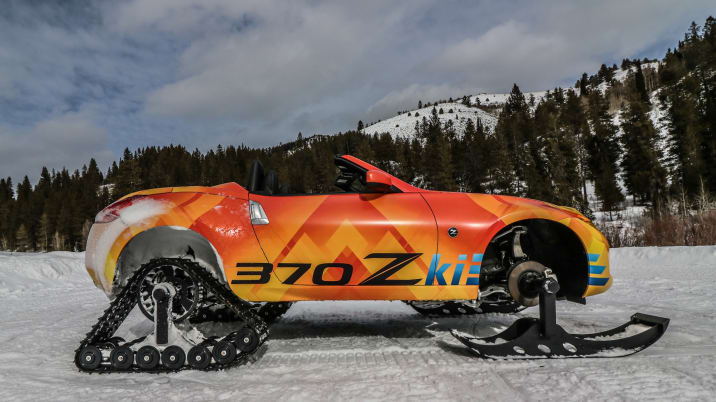 A custom lift kit raised the Z three inches, providing just enough room for the rear tracks to clear the wheel wells. The front suspension was fitted with adaptors to give the skis enough travel and rotation. Unlike the Winter Warrior vehicles, the 370Zki has a reasonable turning radius. The engine and transmission mounts were custom fabricated and a skid plate was added to keep the 3.7-liter 332 horsepower V6's guts from spilling out like a lightsabered tauntaun. Out back there are custom mounts for the rear springs, rerouted brake lines and a new fitment for the exhaust system.

The final product is both incredible and ridiculous. It takes a minute to get a feel for the car, but once things get going all you want to do is pop off gears and toss up a never-ending rooster tail of snow and ice. Braking is the most difficult aspect, but proper technique comes quickly. You simply have to let the tracks do the work and slow down in a straight line. Stab the brake pedal like you would on a street car and you'll send the ass end whipping around (the front brakes don't work since the hub doesn't rotate). 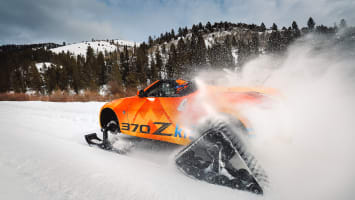 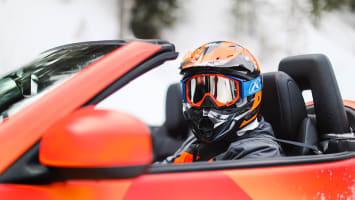 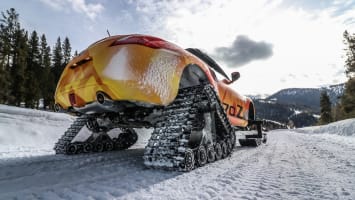 The 7-speed automatic means you can just put the car in drive and go, but it's far more entertaining to use the paddle shifters. From a dead stop, floor the gas and snap through gears one through four. The tracks take will a second to catch, but once they do the best solution is to just keep your foot in it. With the top down, expect a localized storm to shower you with ice, but it's all part of the fun. There's a hell of a racket from the tracks, but it's matched by the Z's V6 shrieking V6 cracking at the rev limiter.

As with any rear-wheel drive car in the snow, oversteer is the name of the game. It's easy to induce, but the Z is so easy to reel back in that you keep goosing the gas to see how far you can push it. Approach a corner, back off the gas and downshift to transfer the cars weight and then nail it again to power out. It's intoxicating. All you want to do is create your own Rally Sweden highlight reel.

Unfortunately, these are just entertaining concepts that remind you that some days are better than others. That said, American Track Truck sells Dominator tracks for nearly anything with wheels. The tracks can be swapped for regular wheels by a single person in about an hour, though a second pair of hands is highly suggested. We highly encourage anyone thinking of putting tracks and skis on their sports car to follow through. It's as great as it looks. Come see Nissan's concepts at the 2018 Chicago Auto Show.