How Mazda got Skyactiv-X to work is incredible

Spark-Controlled Compression Ignition: "Take everything you know about engines and turn it around."

Alex Kierstein
"Take everything you know about engines and turn it around," Mazda North America Vehicle Development Engineer Dave Coleman says, patiently and with a look of benevolent pity, as he's quizzed about the particulars of the company's new engine. The Skyactiv-X engine is enigmatic — and deceptively simple in operation. And the bottom line for American consumers is that they'll be able to buy a car (or crossover; we don't know yet what vehicle will first get it) by late 2019 that provides diesel-like fuel economy but runs on regular old gasoline.

In between diesel and spark ignition, but it's neither

To truly understand it, you have to dive into the contradictions. Take that regular old gasoline: Contrary to common sense, the lower the octane, the better it works. In the lab, the Skyactiv-X engine loves 80 octane. The lowest Americans get is 87, so the engine is tuned for that octane. Go higher and you lose some low-end torque.

Coleman was right. It's hard to wrap your head around an engine that thrives just at the point when most gas engines would aggressively self-destruct. It uses a supercharger to pump additional air — but not additional fuel. It uses spark plugs to start a combustion cycle that normally doesn't need a spark. And, quixotically, it's not displacing Mazda's own American-market diesel engine, currently languishing in a seemingly endless hell of regulatory approval. 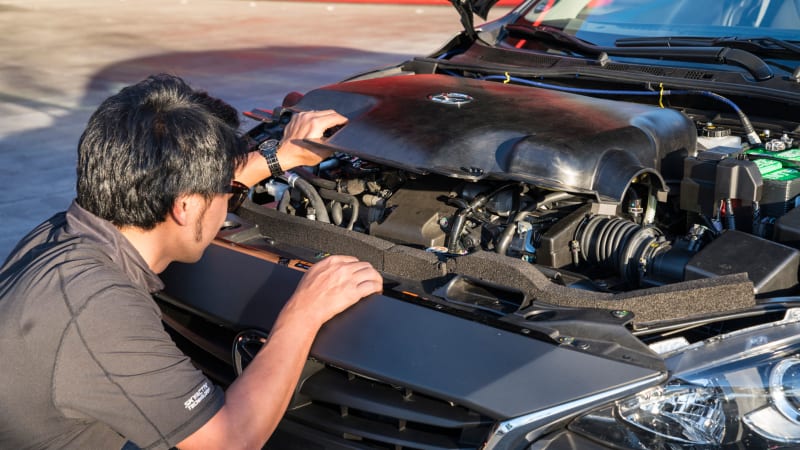 The benefits of lean combustion

Why even try to tame HCCI? The answer is much better fuel economy and lower emissions. Less burned carbon-based fuel, less carbon dioxide released. That's simple. But there are some thermodynamic reasons for the lean combustion you can achieve with compression ignition that are worth explaining.

The ideal amount of fuel for a conventional engine to burn is about a 14:1 air-to-fuel ratio. That lets every molecule burn nicely, in theory. If you want to burn less gas, you need to get more air to ignite — for Skyactiv-X, this is roughly double the amount of air a Skyactiv-G engine would be able to burn.

Master this, and you get lower combustion gas temperatures — that means less energy is wasted as heat that has to be frittered away in the cooling system. This also eliminates some efficiency losses involved with throttle operation. But it's really tricky to get a mixture with very little fuel in it to ignite properly. Imagine trying to light a fire with the kindling spread out all over the room.

The challenges of burning less fuel

So Mazda's gone sideways a bit. Rather than eliminate the spark when running in compression-ignition mode, spark is always involved. Mazda claims the production version will be up to 30 percent more efficient than the already efficient Skyactiv-G engine. To understand why, Jay Chen, Mazda Powertrain Engineer, stepped in to explain how Mazda's variant of compression ignition, known as Spark Controlled Compression Ignition (SPCCI), works.

Imagine a normal gasoline combustion cycle. You mix just the right amount of air with the perfect squirt of fuel, squeeze it with the piston, and then blast it with a spark to light it off. It explodes, expands and pushes the piston down. Get the timing or compression wrong and the fuel might preignite, exerting destructive pressure on the piston while it's still moving upward. That is, to put it mildly, bad. 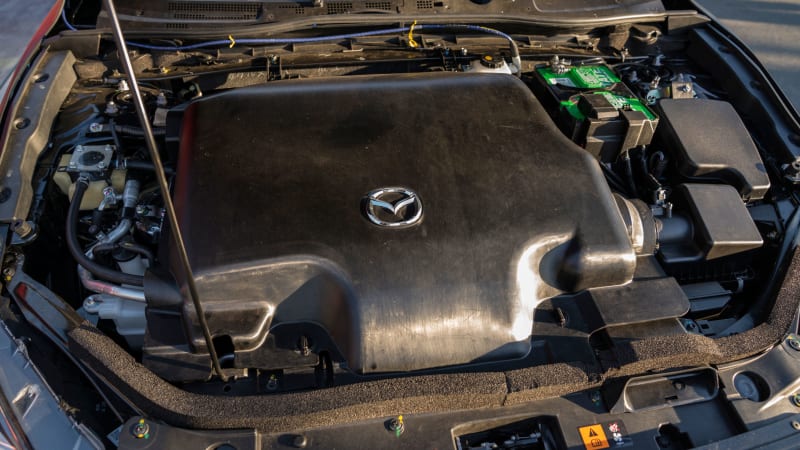 One way to avoid preignition is to richen the mixture. All those fuel molecules help damp down the propensity for the whole volatile cocktail to go off early. But the best way to save fuel is to cut out as much as possible. Hence all of Skyactiv-G's tricks to burn less without blowing up: direct injection and relatively high compression ratios. Don't add fuel until just the right moment of exceptional pressure, and there's nothing to detonate early. The only limitation is that it takes a significant amount of time for the flame caused by a spark plug to reach every corner of the combustion chamber. With a lean mixture, it might not even get there, resulting in the flame fizzling out.

Also, the longer it takes, the further down the piston moves, reducing the overall energy transferred to the piston and more time for kinetic energy to be frittered away as heat, wasted because it's doing work heating up the cylinder walls rather than acting on the piston.

Compression ignition is so seductive because it ignites the mixture all over. Less time for flame propagation, less wasted energy. Also, a sharper and shorter pulse of energy. That's why it's also dangerous. You need to time it exactly right. And the engine load and speed ranges at which Mazda wanted SPCCI to work mean that an HCCI process simply wouldn't work.

The solution is to diverge completely from the idea that compression ignition needs to be sparkless. Since there's no transition from spark to sparkless operation, many of the hiccups of HCCI are also avoided. How it works is elegant but also devilishly difficult.

Using cylinder pressure monitors, ambient condition sensors, and a lot of computing power, the application of spark is timed just right. So too is a split pulse of fuel from a very high pressure, multi-orifice injector. The high pressures (somewhere between Skyactiv-G and -D, but Mazda won't say how much) and spray pattern help the small amount of fuel spread evenly. The combustion chamber and injection pulse is designed to create a swirling effect, like a little hurricane — complete with an "eye." Mazda discovered that it could make the eye a little richer than the rest of the mixture by injecting some fuel later, while keeping things overall too cool and underpressurized to actually self-combust. 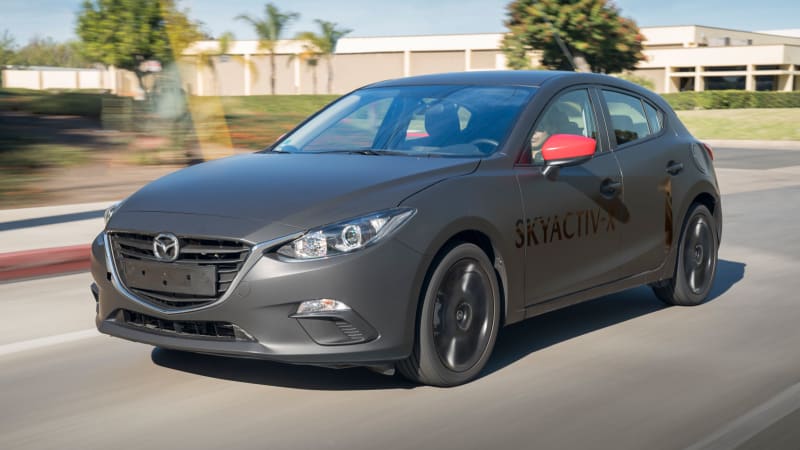 Igniting that small enriched portion in the "eye" creates enough extra heat and pressure in the rest of the combustion chamber to ignite the leaner mixture around it. The result is a controlled and very quick burn of an extremely lean mixture overall. It's the puzzle piece that makes SPCCI work at around 80 percent of the operating range of the engine in normal circumstances.

In normal spark combustion mode, used at startup and very high loads, the engine uses a variant of the Atkinson cycle to lower effective compression to prevent preignition, leaving the intake valve open to allow the piston to push some charge back out. That's nothing new; a Prius uses the Atkinson cycle at low loads to save fuel, and so do Mazda's traditional Skyactiv engines. It's not as efficient as SPCCI, but it's also only using spark-ignition for a small range of operating conditions.

Skyactiv-X needs a lot of air, so it employs an unconventional supercharger to help feed it in. It's a small Roots-type blower that is disengaged with a clutch when not needed, reducing parasitic losses.

In a conventional supercharged engine, more fuel is added to burn with the additional air, giving a small engine the lungs of a much bigger one. In the X, it's only there to add air, further leaning out the mixture. In fact, Mazda isn't quite sure what to call it, because calling it a "supercharger" makes it sound like the 2.0-liter Skyactiv-X should act like a bigger and more powerful engine than it does. It's a low-boost, relatively small unit, so, it's better to think of it like an air pump, there to cram some extra air in when needed.

Mazda won't talk specifics about engine output figures or fuel economy; most of the numbers are target percentages that compare to current engines. Since the final tune is a ways off, and will also depend on what vehicle it goes into, talking about horsepower and torque is sort of a guessing game. In Frankfurt, Mazda said the prototype engine was making about 187 horsepower and 143 pound-feet of torque. At Mazda HQ in California, the numbers bandied about are closer to 190 horsepower and 180 lb-ft of torque. You'll note these numbers look more like gasoline engine output figures rather than diesel numbers, but the torque curve looks and feels more like a diesel. To read more about how it works on the road, you can pore over our coming first drive review.

Taking a step back

The whole operation is extremely complex, and the confidence of the Mazda engineers surely masks a long string of failures and frustrations before a running prototype engine emerged. And it's not perfect (yet). Our prototypes, highly modified Mazda3 chassis that are a preview of the next-generation Skyactiv platform, pinged mightily at certain points — particularly when there was an abrupt change in throttle position. Snap off or onto the throttle, and a diesel-y clatter emerged. Mazda promises that's simply a matter of additional tuning to tamp down those bursts of knock, possibly completely. But the company has definitely tamed the sort of intense stumbling that plagued the HCCI engines when they transitioned from spark to compression ignition. Despite the preignition rattle, there's otherwise little indication under way as to what type of ignition is occurring, and when it switches. 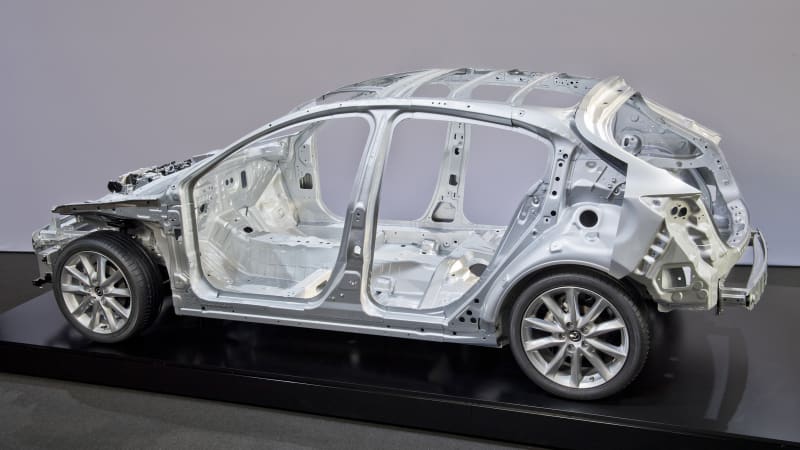 The easy confidence to which the Mazda engineers described the principles of Skyactiv-X made it sound like a foregone conclusion, but think about it more and the remarkable complexity stands out. This engine is solving a lot of very complex problems about how to burn fuel correctly thousands of times per minute. This is a technology that can only exist in our charmed world of cheap, high-speed computing — and it's also a technology that requires dismantling many preconceived notions of internal combustion to grasp.

This is an exciting technology, one that may make internal combustion engines relevant for far longer than anyone imagined a few years ago — in theory, at least. How it'll do in the marketplace depends on too many factors to predict right now. But you can't help but admire the pluck of tiny Mazda, the company that perfected the rotary so many years ago, tackling a similarly impossible challenge.