Joel Stocksdale
The dawn of a car model's new model year often means a slight increase in price across the board. Sometimes, though, a company goes the opposite direction, and in the case of Lexus, goes way in the opposite direction. For 2018, Lexus slashed the base price of the RX450h hybrid by $7,340 versus the 2017 model for a total of $46,690. The price reduction isn't only for the normal RX450h, the F Sport version sees a major decrease of $4,090 for a new starting price of $53,400.

The purely gasoline-powered Lexus RX350 line doesn't get the same deep discounts for 2018. They actually increased in price, but only slightly. Normal RX350s, both front- and all-wheel-drive, are $50 more this year. The same goes for the F Sport versions of the RX350.

The RX line also will get a new longer version with a third row seat. Pricing has yet to be released for the longer vehicle. But we know it isn't higher or lower than 2017 since there wasn't a long version that year. 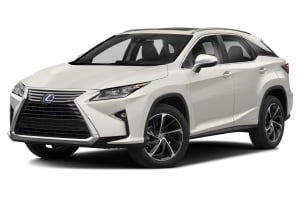