Before you ask, it probably won't be attached to a rotary

Joel Stocksdale
Mazda has a history of interesting engine technologies, from yesterday's rotary engine to tomorrow's compression ignition engine, and new patents show it still may have some internal combustion tricks up its sleeve. The one on display in these patents isn't especially new in concept, though. A sequential twin-turbocharger setup is something Mazda itself used on the third-generation RX-7. But it's something we haven't seen much of lately. It looks like it could have some possible advantages over older sequential systems, and it has some potential advantages for enthusiasts.

First a quick and dirty primer for what makes a sequential twin-turbo system distinct from other twin-turbo systems. In many twin-turbo engines, there are simply two turbos that work together as one bigger turbo. They're the same size, and they spool up at the same time. With a sequential setup, at low rpm, a smaller turbocharger is spooled up first at low-rpm for quicker throttle response, and as the rpm and exhaust pressure increases, a valve opens up that allows a larger turbocharger to also spool up and provide high-rpm boost.

That's basically how the Mazda design shown above functions. A big flap blocks off the larger turbocharger exhaust inlet, channeling all the exhaust to the smaller turbo. When more exhaust is available at high rpm, it looks like that flap opens up to spool up the big turbo, too. 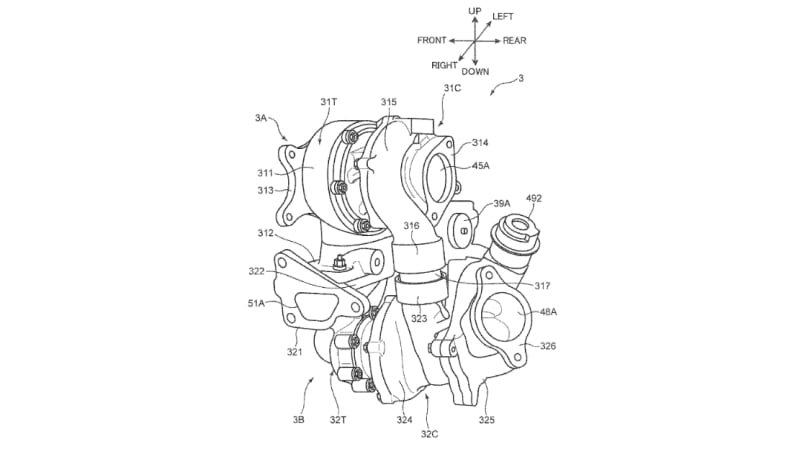 What's interesting here is that the way the turbochargers are packaged takes up less space than past systems. It looks like both turbos are contained in one unit that shares the same exhaust outlet, meaning the exhaust manifold could be kept simple and compact. In fact, the piping for compressed intake air could also be shared, reducing the amount of piping, which would further decrease the amount of materials and possible failure points.

There are a number advantages of making this system smaller. The potential applications of the system are much greater, since it could fit in smaller cars with smaller engine bays. Making the system smaller also means that there won't be as much weight, which is important from both fuel economy and performance standpoints. Finally, the smaller setup likely uses fewer materials, which could make the system cheaper and thus easier to offer on a wider range of vehicles, or at least more profitable for Mazda. And of course, the system could still have the throttle response and power benefits of a more conventional sequential turbocharger setup, depending on how it's optimized.

We do have several unanswered questions. For instance, why would Mazda look into a twin-turbo system when variable-geometry and twin-scroll turbochargers can provide similar results? They also each only use a single turbocharger, which could hypothetically be lighter and cheaper than two. Perhaps the two turbos can provide more effective boost over a greater rpm range. Also, what would this engine go in? We would love to see it power a new high-performance Mazda3, but maybe it would be used for a largr luxury sedan based on the Vision Coupe. Only time will tell. We'll be watching this development closely.