The wildest vehicles we saw at the 2017 SEMA show

Joel Stocksdale
Though the SEMA show is all about showing off new parts and concepts for future products, the spice of the show are the wild builds. Most of the vehicles on display would be considered the wildest machine around in normal traffic. But when they're all vying for attention at the same venue, they become normal themselves, meaning that it takes truly astonishing work to stand out. We've gathered some of the most insane and absurd vehicles and things we saw at this year's show in this post. And before going forward, be warned that what you'll see is not necessarily tasteful. In fact, some of it is pretty tasteless. For those of sterner stuff, read on .

We'll start off with something on the mild side of wild. It's this 1958 Lincoln Continental, and it's probably the classiest thing in this list. It's done up like a classic '50s or '60s custom with a vibrant blue paint job, immaculate white interior, and cleaned up body lines. But what makes it truly remarkable, is the engine under the hood. It's a Falconer V12, which would be amazing on its own, but it's also capped with not one, but two superchargers. The gleaming chromed blowers are always visible, too, thanks to the window in the hood. 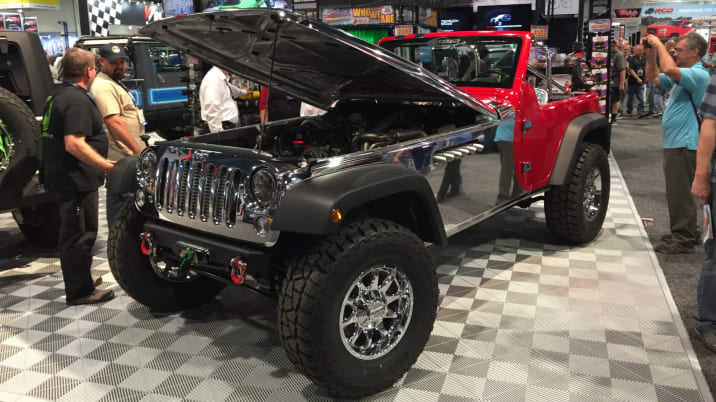 Not to be outdone, this Jeep Wrangler had just as many cylinders as the Lincoln, but the form was a bit different. Instead of a single V12 engine block, the Jeep has two 3.8-liter V6s joined together. They're both fed by a single centrifugal supercharger. And as you can see, the nose of the Jeep was lengthened significantly to fit the engines. There was a bit of extra space leftover that allowed the winch to be fitted behind the grille, too. 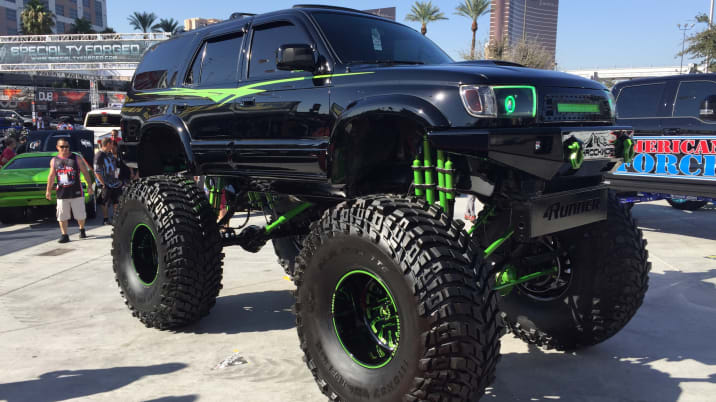 Trucks and lifted things were really popular at this show. While many lifted trucks featured enormous wheels and street-oriented tires, this Toyota 4Runner went the traditional monster truck-style route with simply enormous tires. The size of the tires is emphasized by the comparative narrowness of the old 4Runner body. We were trying to decide what the truck should really be called; possibly "8Runner" since it's twice the size of a 4Runner. The name "4Crusher" also came up, since this thing probably can't run much anymore, but it sure could squish things. 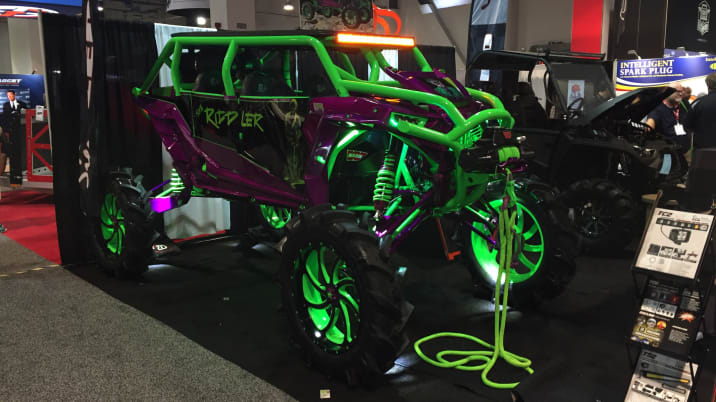 Side-by-sides or UTVs are the little cousins of trucks and SUVs, and as such are often lifted, too. This particular model really stunned us with its garish green and purple paint scheme. It's themed after Batman villain the Riddler, which makes sense, though we suspect choosing the Joker would've been acceptable, too. 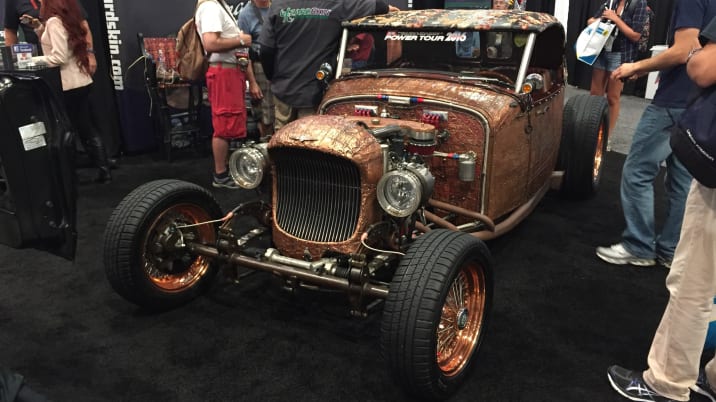 We'll take a bit of a break from lifted things and look at some street vehicles. One that we couldn't stop looking at was this hot rod. Though the shape of the body wasn't particularly shocking, the material on the outside kept us guessing. As it turns out, all the little panels you see are pieces of copper that have been folded and manipulated to achieve the finish you see. The eclectic car also features an earth-tone floral print top to finish off the unusual look. 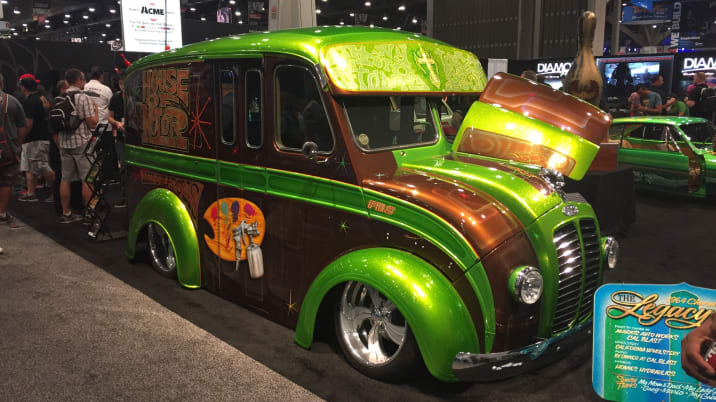 Cars, trucks and SUVs are the norm for SEMA, but we also see a fair share of radical commercial vehicles. This milk truck at the House of Kolor booth is one of the grooviest. It's thoroughly slammed and has a classic lowrider paint scheme with lots of airbrushed graphics and loads of metal flake. Check out that massive sun visor, too. 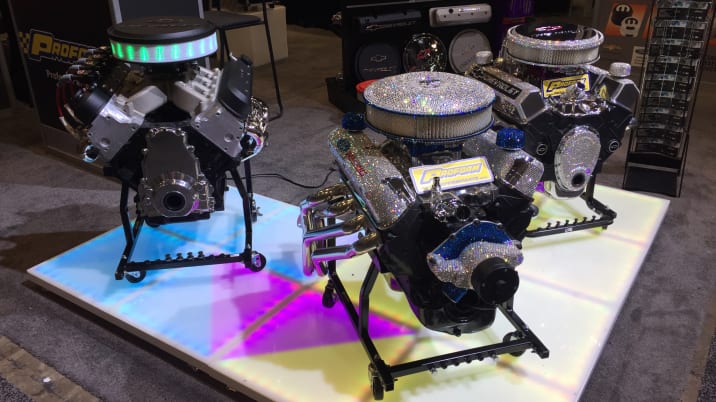 Between all the cars are plenty of parts companies ready to offer you the items you need to replicate the wild builds on the floor. Literally the flashiest parts we saw were these crystal-encrusted V8s. Everything from the valve covers to the timing chain covers were coated in the things. We suspect the treatment wouldn't hold up over time. Also, although the engine on the left looks pretty plain, it features LEDs in the air filter that flash different colors. 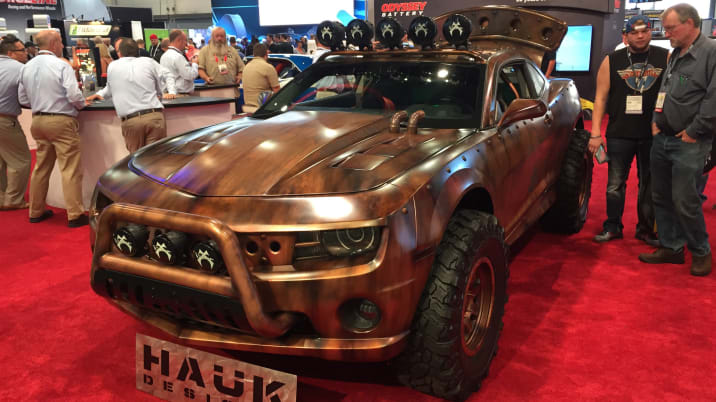 The last two vehicles in this list are also lifted. The second to last is a fifth-generation Chevrolet Camaro that looks just about apocalypse-ready. It has big fat tires, lots of lights, and a push bar up front. There were some interesting touches scattered about, too, such as a pair of gauges sticking out of the hood, and, to go with the car's stated redneck theme, a gas tank in the back made to look like a moonshine barrel. 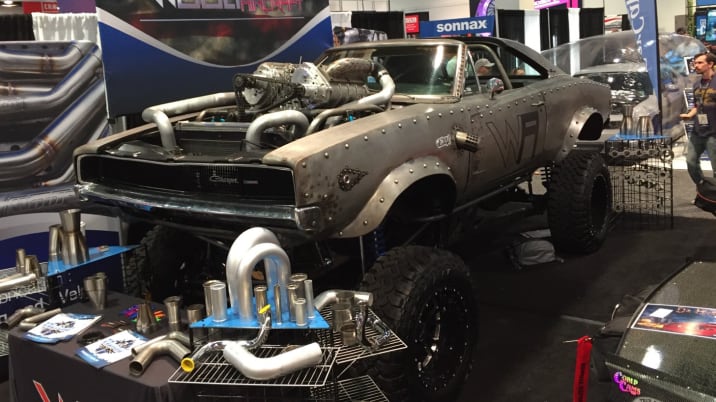 The final car on the list is also why we only called that Camaro "just about apocalypse-ready." This Dodge Charger looks as though it just rolled out of " Mad Max: Fury Road." Although the huge lift and tires are the initial draw, focus turns quickly to the engine. It's a huge V8 with two even bigger superchargers in a "V" configuration on top. They're spun and linked by a big metal chain. The whole package is completed with the bare metal finish, fender-exit exhaust, big rivets, and the targa roof.