Horse-man of the auto advertising apocalypse.

Alex Kierstein
Take a minute and watch the video above. After, you might have questions. I will try to help you with these. But first, here are some questions for you: No matter whether you thought the ad was good or not, does it get you excited about the N Performance subbrand? Do you want to find out more about it?

I suspect the answer is "no" for most of you reading. Unfortunately, reading what Hyundai and the ad agency said about these ads isn't going to help much. Intended to skewer traditional luxury advertising tropes, the agency says, these ads are a "tongue-(stuck firmly)-in-cheek poke at automotive and luxury brands taking themselves too seriously."

R/GA is the ad agency behind these ads, and its chief creative officer, James Temple, told AdAge, "We want people to rethink their views of Hyundai as a practical, compromise choice, to a brand which shows people through the power of 'N' that they make cars that are fun to drive and which aren't like anything else out there."

OK. So, poke fun at luxury and automotive advertising that takes itself too seriously. And to be fair, this sort of thing has been done before to great success and general acclaim. Remember Volkswagen's "Unpimp The Auto" campaign? It cleverly took aim at a then-trendy aspect of the tuner culture and literally crushed it with a new GTI.

The message was clear: Your over-tuned Ford Focus is both gaudy and inferior. Step up to a GTI, which by the logic of the ad, you don't need to throw tuner parts at to have fun. It built excitement for the hot hatch while earning some automotive credibility by throwing shade at MTV's over-the-top " Pimp My Ride," at that point rapidly losing its halo of tuner coolness.

"Pimp My Ride" was a big, easy target to mock. And the relationship to automotive performance (or lack thereof (most were plays on the "Yo dawg I heard you like ..." theme, anyways) made the analogy work.

Where the Hyundai ads step off is the target for ridicule. R/GA claims it's roasting automotive brands, and they can say that all they want — I don't see it. I see a childlike understanding of how to dismantle the tropes of a classic Calvin Klein ad — monotone, lots of black, shirtless models, personal beauty products — over which the lightest veneer of automotive reference is applied. So the perfume smells like burning tires. That's still a humorous ad about perfume. And what the hell does perfume, or fancy headphones, or a hairdryer have to do with performance subcompacts?

Dig deep and you can find a semi-rational thread underneath, suffocating underneath a blanket of inappropriate carrier imagery. It could be, "You don't need big horsepower to have a lot of fun." Sure, that's a great sales pitch for a hot hatch. It's also a fundamental truth: Slow car fast is super fun. It could also be, "Traditional auto advertising is too focused on irrelevant performance criteria, like 0-60 times, rather than pure fun." Also a valid subtext, a little harder to suss out, but there at least if you take the agency's explanations about the ads at face value. And ... well, there's no good reason for a Hyundai hot hatch to be taking pot shots at luxury advertising, so I'm at a loss for that aspect. 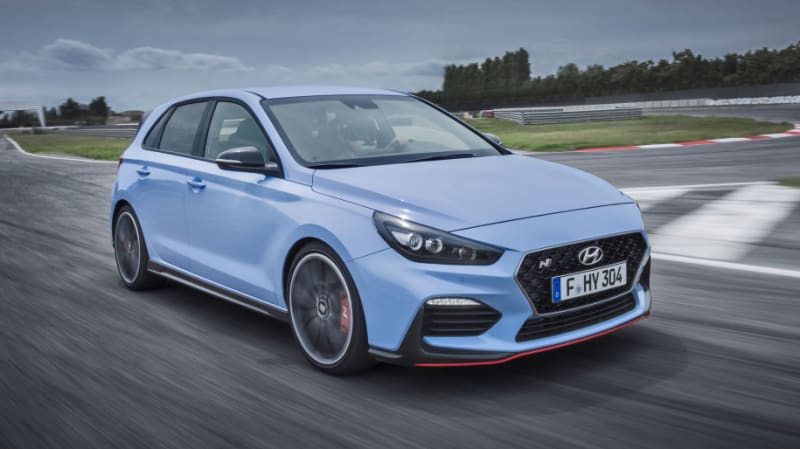 Not that it'll ultimately matter much, since the i30N should be very good, but won't come to America at all. Too bad. The i30N looks great, and frankly it could be just what the company needs to keep the Elantra GT relevant in a crowded field, with buyers more interested in small crossovers anyways. Better: Jack up the Elantra GT, add some cladding, and then N-ize it. Instant subcompact performance crossover, putting Subaru on the defensive about why there's no turbo Crosstrek. This pipe dream is especially sad, since we'll get a Veloster as our first N vehicle instead, which is as much of a kneecapping to the whole N concept as this ad campaign. Who wants to bet it won't have the i30N's 271-hp engine, but will have tons of N badges?

I'll say this: Automotive advertising, and reviewing, is unduly focused on irrelevant performance criteria and not enough on pure, simple, unadulterated fun. There are ungodly fast cars that are an utter snooze to drive, and painfully slow cars that are hilarious to coax to speed. Hyundai very easily could have seized upon this idea and spun it into a funny, clever ad campaign. Something with heart, and something relatable to its audience. Think about the GTI: a very similar buyer demographic, I have to think, and so skewering tuner culture was a savvy play. Try to find a mid-30s male with an interest in affordable performance to whom a satire of a perfume ad is an effective sales pitch. Surely they're out there, but it's not the easiest route to the goal.

That's what's sad to me. Hot hatches are the easiest part of the auto landscape to pitch (maybe not to actually sell), in my opinion. They're scrappy underdogs, everyday backroad heroes. Something you can afford if you have a good job, but not requiring as much of a practical sacrifice as an equally fun Miata. Poke fun at normals in their traditional three-box sedans, or poseurs in Camaros. Show a Veloster N destroying them in a drag race, where the scoring is based on fun rather than timing. Wrap the fundamental goodness of the i30N in some sort of relatable imagery (for the rest of the world), and inject it into a relevant content stream.

Instead, we have a guy's face flapping in the breeze of an N-branded hairdryer. The N brand will have to dig itself out of a hole of strange associations rather than bursting onto the scene with some memorable schtick. Good job, Hyundai. You've hobbled the N subbrand before anyone's had a chance to drive one. At least we got to watch a horse-man thrash around in a bath, though, right?