If you've spent any time around classic cars, you've been burned. Figuratively and literally. Classic cars are a bit like rescue dogs: the right one with the right history — and a good deal of your time, money and energy — will make a wonderful addition to your home, but there's a chance it's going to bite your face off.*

While there's a litany of things you can do to vet Rover before he comes home to meet your new infant, classic cars are more buy now, inspect later. That's because of things such as distance, competition from other buyers and difficulty even finding a car at all. Sometimes, your dream is a unicorn. Something with style and history. Something with car-guy cred out the sidepipes and only five known examples, say.

Something, say, like a 1963 Corvette Grand Sport. Enter Superformance.

Long known as the shop where you can walk in with a pile of cash and walk out with a brand-new Shelby Cobra, GT40 or Daytona Coupe, Superformance has a side-hustle slathered in GM badges. Tucked in an anonymous business park in Orange Country, this outfit has one of the coolest shops you've ever seen. You like Cobras? Pick your poison; it's here. GT40s more your speed? Here, too. One with a partially exposed aluminum body. Still not your jam? They import Caterhams, too. You're welcome. Today, however, we're here to drive their 1963 Corvette Grand Sport. 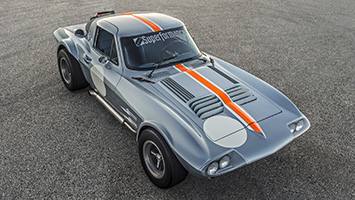 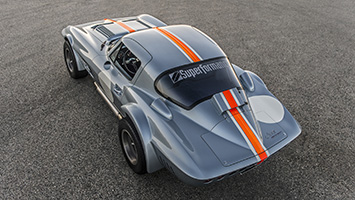 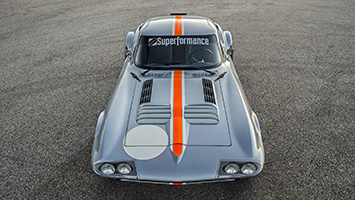 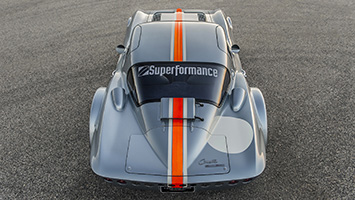 The 1963 Corvette Grand Sport is a car that wasn't supposed to exist. The short version of the story goes like this: Zora gets permission from his boss to build the baddest Corvette around to take on those pesky Shelbys, crank up production to 125 to meet homologation rules and clean up at Sebring and Le Mans. Zora does Zora and gets busy, creating a super-lightweight fiberglass body on a tube frame, topped with magnesium wheels and a 200-mph speedometer.

And then the chairman of GM found out about the project and killed it. Something... something... GM corporate racing ban. (What, you thought buzzkilling bean counters were new?) Zora did Zora and loaned out the cars to some privateers with the "nudge-wink" inference that he would continue to provide racing support. They got bigger tires. Bigger fenders. Huge, 485-horsepower V8s. And when three of the cars were racing at Speed Week in Nassau in the Bahamas, a bunch of GM engineers happened to be vacationing there at the same time.

Those privateers — Jim Hall, Roger Penske and Dick "The Flying Dentist" Thompson — kicked the chicken-farmer's Cobras back to Texas beaten, if not outright embarrassed.

And then the story ends. The cars are all alive and accounted for. A couple were converted into absolutely wicked-looking roadsters, but their conditions are known and they come out for special occasions. You aren't finding one on Craigslist for the price of a new Buick — trust us. 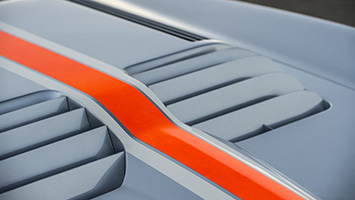 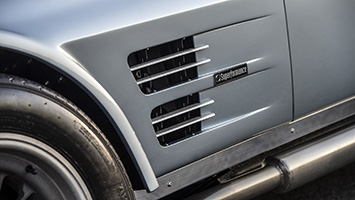 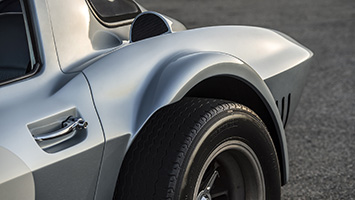 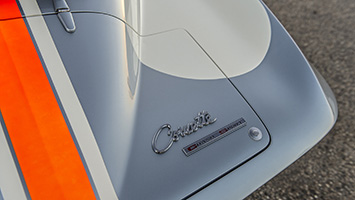 But now, in front of us, more than 50 years later, is an homage to car #004. All-new from the ground up. A custom, Superformance-built round-tube frame, just like the original had, is surrounded by all-new, hand-laminated fiberglass bodywork painted Cadillac Firemist blue with a neon-orange stripe. Real magnesium wheels. This is no restomod; it's a licensed re-creation. More than that, it's a time traveler packing some heat from the future.

This particular car is fitted with the 6.2-liter LT1 V8 that Chevy fitted as standard to the C7 Corvette when it debuted, but LOOOOOORRRRDY does it fire up different. There's no stutter or cough as the old gasses mix with the new in an attempt at combustion as in an old 'Vette, but there's no click-whirrr of a modern starter, either. The key turns and the sidepipes deafen. It's a glorious pop-pop-grbgrbgrbgrbgrb that we didn't know this V8 had in it. We figured GM's fancy engineers with their fancy software and fancier engineering degrees had bred it out.

From there, the Grand Sport settles into a too-low-rpm idle, dipping below the wub-wub-wubwub wub-wub-wubwub of a lumpy old-school cam, and into the "uh, this ain't right" category. And, indeed, it ain't right. While this is an officially licensed GM product, complete with access to the blueprints and part specs on the original cars, GM and Superformance are still working out a couple of things. Modern motors, you see, are designed to work in big systems with lots of electronic inputs; break the chain, and things get funny. The funny here is expressed in idle irregularities and the first couple millimeters of throttle travel. Instead of being able to tinker with the carbs or the throttle cable, however, the engineers down here are exchanging code with those in Michigan to sort things out. 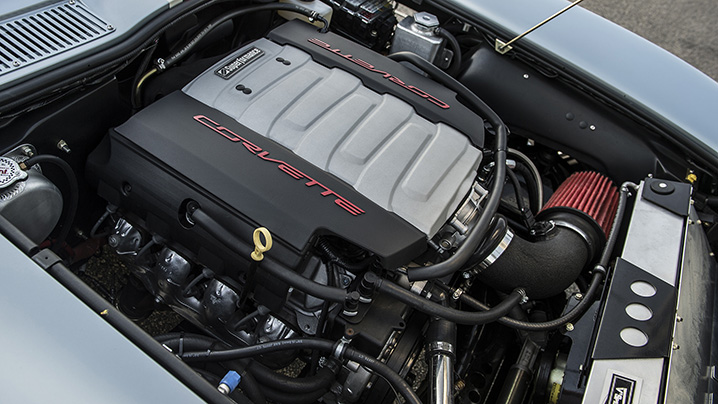 Thankfully, there's a solution to both of those abnormalities and it is, bar none, my favorite way to solve problems: Add more throttle. When in doubt, as the saying goes ...

Stab the gas, dump the clutch and go. As you might expect from a car that needed fender flares the size of guardrails, there is perhaps too much tire here. The mag wheels are wrapped in Avon rubber front and rear — 245/60R15 up front and 295/50R15s muffin-topping the backside. We're off without a hint of tire or clutch smoke, but enveloped in a wall of noise. The rear squats like a dog on its favorite lawn, and the steering goes spooky-light. Shifting the Tremec T-56 six-speed manual into second momentarily cures the lightness as the front dives hard on its springs and sidewalls (#SavetheSidewalls), teasing you with some steering confidence before it is immediately stripped away as you plow deep into the tach in the next gear.

The experience is a sensory wonderland of sound and smell and vibration. It is lacking in one department, though: speed. Our test car just didn't have the oomph we'd expect from this much power in this little fiberglass. The motor pulled to the top like an LT1 and never sounded like it missed a beat, but we were working hard to only go kinda fast. It recalibrated the way we wanted to drive. It's not just that we were driving this differently, more lackadaisically, than we would a C7, but we were driving it with less aggression, and thus less glee, than we would even a normal '60s 'Vette. 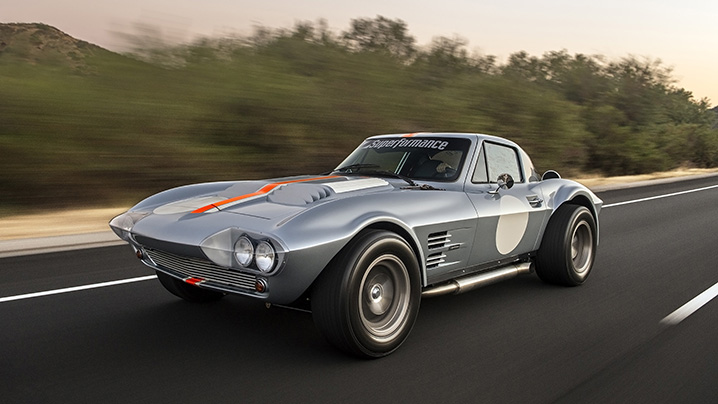 It's a condition of the above, mostly. The 1960s Corvettes, even the racing ones, weren't made for modern tires or the precision of modern throttle control. Corvettes aren't dainty, delicate things. They respond well to some physicality and drive well when at least two of the tires are shy on grip. Check out some vintage Corvette racing some day; those cats aren't fingertip-finessing the cars to go fast. The downstream effect of this much grip is that it highlights the softness of the suspension and weaknesses of a chassis from the '60s. Less tire would bring back the charm.

Once holding speed, the Superformance Grand Sport cruises like you want a car such as this to cruise: loud, soft and hot. Power windows (optional) helped a bit. Air conditioning (optional) helped a bit. You never forget that this is an old design, with a small interior, lousy seats (seats in sports cars weren't comfortable until the 1980s) and very little sonic or thermal insulation between you and everything else. Exactly as it should be.

As you've likely guessed, "exactly as it should be" isn't cheap. The package starts at $109,900, and then requires things such as the engine, transmission and assembly. Oh, and the 100 percent period-correct, functional rear-deck differential oil cooler. All told, this car wears a sticker price of $169,265 which, while a lot, is a downright bargain compared with an original — which would need another comma in its price, if you could even find one to buy. 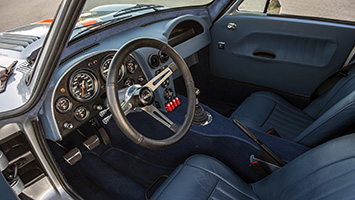 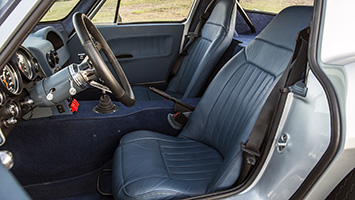 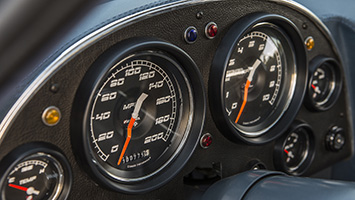 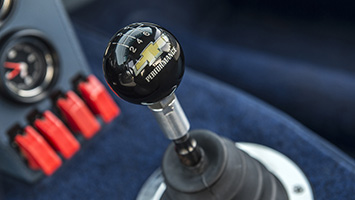 Halfway between a restomod and a faithful re-creation, it's hard to say that this car, equipped like this, has hit the mark. Look, we would never get tired of looking at this car in the garage. As good a shot as Drew is, this thing is 10 times meaner in person. The paint and bodywork are OEM-perfect, and it's got a story you can bore your wife with for the next decade. It's just missing something.

A more theatrical motor would help. We suggest the $17,337 427-cubic-inch LS7 available from GM's performance catalog. Not just because of the 505 horsepower, but because this thing has always felt and sounded like a race-car motor. And have you ever heard one with a cam? Unreal. Some suspension adjustments would help, too, as would careful tire selection — anything to bring back some of that classic feel.

Then again, take the $170,000 you'd spend on this (plus the tire and suspension work to dial it in), and you could get one of the best numbers-matching big-block C2s on the planet. We love that the Superformance Grand Sport exists, carrying on the legend of this very special car, but we'd go with the pound puppy.

*There is little actual chance of this but, the writer thought it was a funny analogy. Please support your local shelter and rescue a dog or cat that deserves a loving home.

$335 - $358 Nat'l avg. savings off MSRP
See Local Pricing
I'm not in the market for a vehicle at this time. Please move this suggestion to the side for 30 days.
Huge Savings