The truck has twin-turbos near the A-pillars

Joel Stocksdale
Ken Block and Hoonigan have released a trailer for the upcoming Gymkhana 10. It both previews the first Gymkhana film in the double digits, but also a behind-the-scenes Amazon Original Unscripted Series that documents the production of the videos and parts of Ken Block's life. The trailer promises five countries and five cars, but it's not entirely clear if all of those cars and countries will be featured in the final Gymkhana video, or if they'll all just be featured in parts of the Amazon series.

One thing does seem clear, and that's that Detroit will be a main feature in the final video. Block's visit to Motown will feature the monstrous Hoonicorn V2, the 1,400-horsepower, twin-turbocharged V8, all-wheel-drive Mustang used for Climbkhana at Pikes Peak. It's sporting a slightly different paint scheme this time, going nearly all black with very dark gray accents. The gold wheels have also been swapped for white ones. But it looks like it will do just as much sliding, spinning, and tire burning as before. We also spotted at least one jump in a split-second clip. 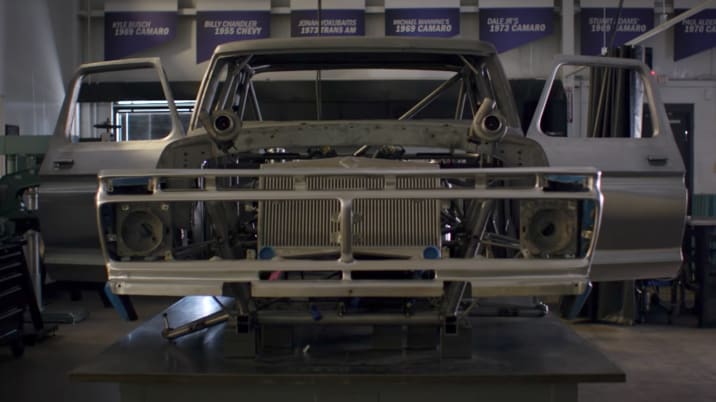 As for the other vehicles, we know that Block's new Ford Escort Cosworth will make an appearance of some sort in the video and/or the series. The trailer mentions a new build, too, one that we can see being assembled in the trailer. Pause the video long enough, and you'll be able to tell that the new vehicle is an F-Series pickup from the late '60s or early '70s, shown above. It's also getting what looks like a new crate V8 under the hood and a pair of turbos right next to the cab's A-pillars. If it's as wild as the Hoonicorn (and it looks like it will be), we're looking forward to seeing it and what it does in the new Ken Block videos.