Apollo Intensa Emozione is a 9,000 rpm middle finger to the turbo-hybrid establishment

Revs and light weight are the keys to this car's performance

German supercar builder Apollo has already shown one radical hypercar, the 1,000 horsepower Arrow, at last year's Geneva auto show. But before that car launches, the company will sell a different hypercar with the name Intensa Emozione, IE for short, which you can probably guess translates to "intense emotion." The IE is also a very different hypercar from both the Arrow and the establishment. It's meant to be as raw and pure as a car can be.

One of the emblematic aspects of this idea is the powertrain. In the middle of the IE is a 6.3-liter V12 developed with Autotecnica Motori. Though its 769 horsepower and 561 pound-feet of torque may sound middle-of-the-road compared with many modern supercars, the IE is unique in that the engine is naturally aspirated and features no electrification whatsoever, so all you experience is a screaming internal-combustion engine. And, man, is it a screamer. It redlines at 9,000 rpm and makes peak power at 8,500 rpm.

One thing that's a little odd considering the raw experience theme of the car is the inclusion of traction control and optional lower power settings. But the traction control can be switched all the way off. 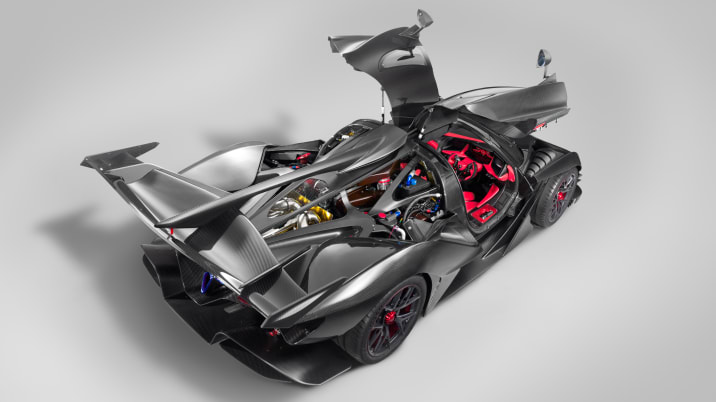 Also, although the engine doesn't make record-setting power, there isn't much car to move either. The IE uses a carbon fiber chassis and body, and curb weight is a svelte 2,756 pounds, roughly the same as a Toyota 86. The power is also channeled through a sequential six-speed manual for fast shifting. This combination allows the IE to hit 62 mph in a claimed 2.7 seconds on the way to a 208 mph top speed.

Straight-line speed is far from the only thing the IE is capable of, though. F1-style double-wishbone pushrod suspension is found at all four corners with adjustable Bilstein shocks and adjustable anti-roll bars. The various wings and splitters produce nearly 3,000 pounds of downforce at 186 mph. Apollo claims that, with the unspecified Michelin tires developed for the car, the Intensa Emozione is capable of over 2.0-g cornering. It should also stop plenty quickly, too, thanks to 15-inch rotors at each corner gripped by six-piston Brembo calipers up front and four-piston units in the rear.

There are a couple of additional perks to the Intensa Emozione. Buying one will allow the owner to participate in a time attack series hosted by Apollo for the hypercar. It will also give the owner first rights to the upcoming Apollo Arrow. Only 10 people will have access to these perks, since that's as many IEs Apollo will build. They won't come cheap either, with a price of €2.3 million, or $2.72 million at current exchange rates.