Passenger drones are 'absolutely coming. ... They're flying as we speak'

Fare would compare to a taxi. Should the auto industry worry?

John McElroy
Whether it's Tesla and the race to electrification, talk of banning the internal combustion engine, or the advent of car sharing that could send car sales plummeting, traditional automakers are reeling. Add to that mix another emerging technology: urban aviation.

Most people would call these aircraft passenger drones, some call them quad copters, but the people in the business prefer the term Vertical Take-Off and Landing craft (VTOLs). It's all about flying over traffic jams by using autonomous, electrically powered drones.

Starting in 2013, NASA began working with VTOL contractors at six test sites. NASA is also working with the Federal Aviation Administration, which is licensing the airspace and developing different scenarios and use cases. The early tests have been successful, and aerospace and defense contractors are getting involved, not only with the VTOLs themselves, but with flight management systems.

One of the startups in the field is the Detroit Aircraft Corp., which works out of the Coleman A. Young International Airport in Detroit. It's working on a VTOL that can carry 4-5 passengers and 100 pounds of baggage, traveling 150 miles per hour with 60 miles of range and a 20 percent reserve. The potential impact on the auto industry is obvious. 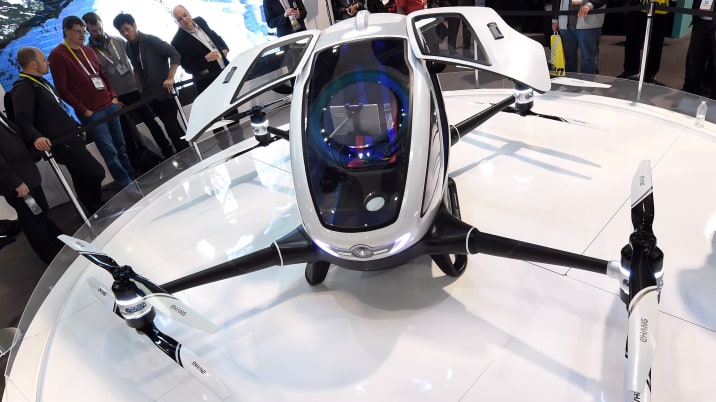 NASA and the DOT are proactive on developing VTOLs because road traffic congestion is so bad and getting worse. That's why Uber is also heavily involved in developing VTOLs — it wants to reduce a trip from San Francisco to San Jose from nearly two hours down to only 15 minutes.

The key to making this all work is getting the cost down. Jon Rimanelli, founder and CEO of DAC, wants to leverage the automotive industrial base for mass-producing low-cost aircraft using automotive EV motors, controls, batteries and battery management systems. Even more, it turns out that automotive sensor technology for autonomy and vehicle-to-vehicle (V2V) communication could be applied to VTOLs.

"Wait a minute, we've spent all this time and money figuring this out for cars, why don't we use that exact same system to manage air traffic?" Rimanelli asks. "We're only going to be operating at about 1,000 feet, and the range of these radios is about 3,000 feet."

And yet, the automotive industry seems to be blithely ignoring the threat that VTOLs pose. "I think the auto industry is showing huge myopia in saying, 'No, no, no, we don't do that stuff. If it doesn't have four wheels and travel on the highway, we're not interested,'" says Bob Lutz, the former vice chairman of General Motors and a member of the advisory board of DAC and AirspaceX. 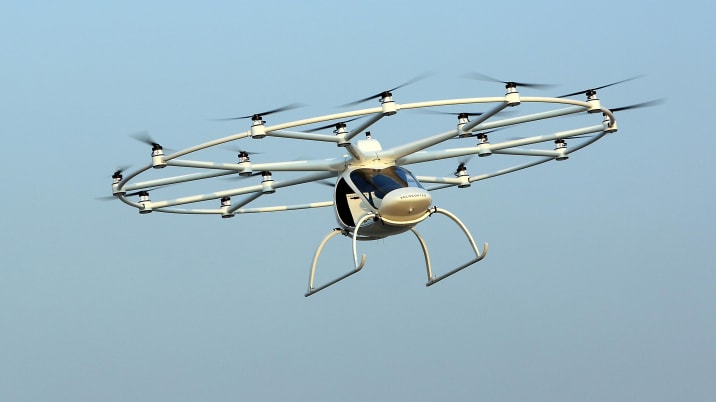 "It's going to happen in stages and take place over a 30-year period, but it's going to start in the next 5 years," Lutz says. "By 2040 and 2050 it'll be an integrated thing, where you may take the first stage of a trip in an autonomous quadcopter, then switch for the last couple of miles to an autonomous car, which you will have booked from the same company on the same day and you'll get the same bill."

Actually, Daimler is one automaker interested in VTOLs. It made a modest $30 million investment in Volocopter, a German startup that recently tested its VTOL in Dubai, which wants to become the first city to use passenger drones.

The idea is to have VTOLs travel at an altitude up to 1,000 feet, flying above roads, obstructions and small unmanned drones, but below small planes and commercial airliners. They would be far quieter than helicopters.

"A quadcopter is stable, relatively silent. The blade speeds aren't as high as they are at the tips of a helicopter rotor. They're safe because the rotors are completely encased. And the technology for accident avoidance is trivial compared to what you have to do with cars," says Bob Lutz.

One reason for so much activity in developing VTOLs is that nothing new has to be invented. The technology is all there.

"There's some basic infrastructure that has to be put in place. I wouldn't call it overly heavy," says Deloitte's Linenberger. He explains that quadcopters can communicate where they are to an air traffic management system, which will know a VTOL's origin and destination and the path it's going to travel.

While much VTOL development work is centered on electric propulsion, the machines could also be powered by a gasoline engine, or a fuel cell. It's all going to come down to which is the most cost effective.

"We've done the math, and the math is working," says Rimanelli. He claims VTOLs could deliver rides for about $2.50 a mile. That's about the same cost as an Uber X ride, and cheaper than a taxi.

The first commercial VTOLs in the United States are expected to appear sometime around 2020.

"The public is excited when they see these personal drones flying around," says Deloitte's Linenberger, "and it's not a far reach for them to imagine being in a bigger one being able to go where they want, when they want."