2018 Honda Fit First Drive | More of everything — even more mojo

The addition of HFP suspension bits make this Fit the handling leader of its class.

The 1990s were a magical time for Honda and Acura. Everything from the mighty NSX to the lowliest Civic was a Vulcan mind-meld of man and machine during these golden years. So far in the 21st century, though, Honda seems to have lost its ability to imbue every single model with that kind of allure, and in the court of fandom there is no greater sin than having something once beloved and perfect and turning it lame.

When we first reviewed the third-generation Honda Fit, it seemed like more of the same. It was less of a driver's car than the outgoing iteration, with a neutered suspension setup and numb steering in the name of comfort. Its other attributes, like in-car technology and clever packaging, helped make up the difference, but we couldn't help but feel let down. With its 2018 refresh, however, Honda got some of its mojo back.

As with any mid-generation update, the Fit receives some styling changes. Chief among them is a redesigned face that exaggerates the fog lamp surrounds, redraws the central intake opening, and adds a shiny swath of chrome across the grille. The lower rear bumper has been reshaped and is now rounder and protruding. 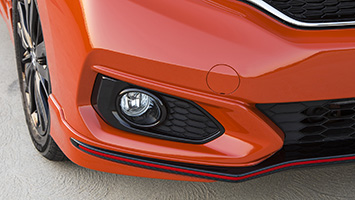 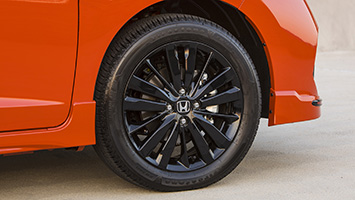 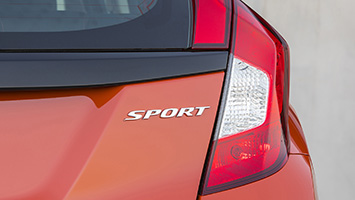 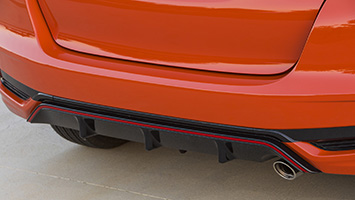 Honda designers said they wanted to make the car look lower and wider, but to our eyes it really just looks busier. The pre-facelift design was cohesive and cute, like a spunky little Star Wars droid. Now there's angles and curves that don't work with the rest of the body. Two new colors are offered, Helios Yellow and the unfortunately named Fury Orange, the latter of which appears to be the exclusive color used on the Japanese Fit RS.

Honda adds an all-new trim level for 2018 dubbed Sport, slotting price-wise between LX and EX. There are no drivetrain upgrades, but it gets side skirts, a chrome exhaust tip, and a unique set of handsome black 16-inch wheels that are one inch larger in diameter that the base LX. A jutting chin spoiler and rear diffuser are finished in black with a horizontal orange stripe that harkens back to the red bands that once adorned the bumpers of Civic S and CRX Si models.

The interior remains largely unchanged, with supportive seats, a plush leather steering wheel, and a range of supple materials throughout that don't make you feel as if you're stuck in a plastic prison. Honda has really ratcheted up the value of its most affordable offering on the tech front, cramming more science into a small segment than Neil DeGrasse Tyson. 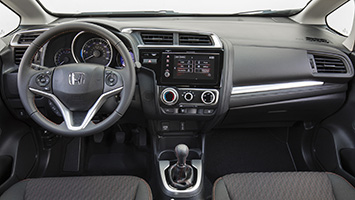 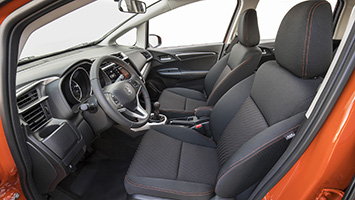 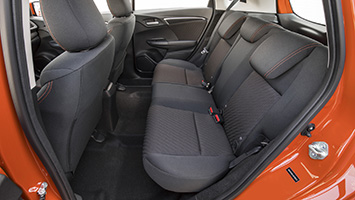 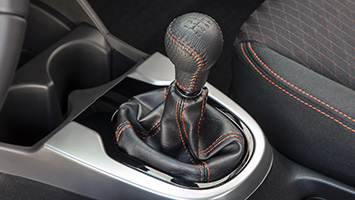 The Honda Sensing suite of safety and driver assistance tools is available on all trims, a $1,000 option on LX and Sport models and standard on EX and EX-L models. With it, you get radar adaptive cruise control, lane departure alerts, and automatic collision mitigation braking.

Those features alone would put the Fit above anything else in its class — Ford, Nissan and Hyundai don't offer any of them — but Honda extends its safety lead with the addition of lane keeping assistance, which automatically steers the car using lines on the highway as guides, as well as road departure mitigation, which can automatically brake and add steering input if you're about to have an "off." Having percolated down from Acuras and Pilots, this is Honda Sensing's first application in a manual-transmission car.

Sport and EX trims and above receive a new infotainment module that includes the long-awaited Apple CarPlay and Android Auto, an SMS texting function, and an all-important extra USB port. Honda's engineers also made a big show of — praise the gods — the return of the volume knob. After receiving a much-deserved panning in 2015 for replacing this proven old-school technology with an infuriating touch-sensitive strip, there's no more taking your eyes off a road to adjust loudness with a shaky fingertip, an act that somehow required more focus than the actual act of driving. 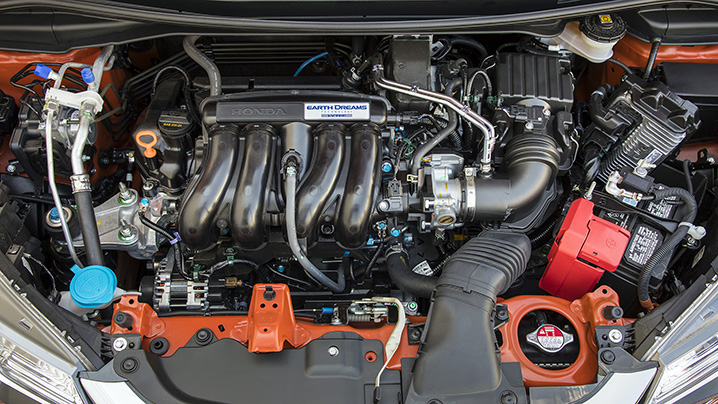 Honda has also taken steps to reclaim some of the third-gen's dulled communication with the pavement. The steering response is much improved, thanks to a solid bearing on the steering column that transmits more road feel. Redesigned dampers reduce the amount of bobbing compared to the previous Fit, and new bracing throughout the unibody reduces body flex. The gearbox is excellent, as Honda manuals have always been, with effortlessly precise gear selection and a Goldilocks not-too-soft, not-too-hard clutch.

In motion, the calmness of cabin makes a Yaris hatchback sound like a go kart. Thicker sound insulation and new "soundproof" glass on keeps road and wind noise to levels found on competitors' offerings at least one class up, maybe two.

Ultimately, though, it's not enough to fully wear the "fun to drive" label applied to Hondas of yore. The Fit's suspension is just a tad too soft, contributing just a bit too much body roll and uncertainty for true Integra-style canyon carving. 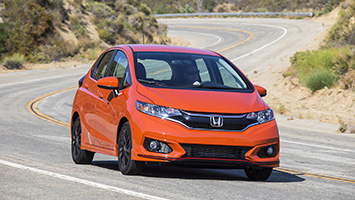 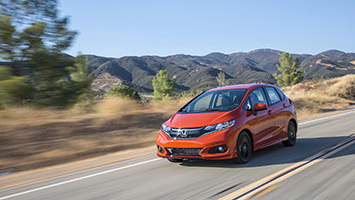 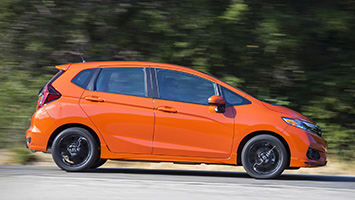 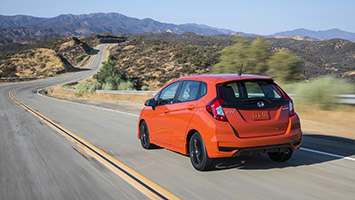 That's where HFP comes in. You don't hear much about the Honda Factory Performance line of parts and accessories, and that's a shame. For 2018 the in-house creator of personalization options offers some pretty neat stuff for the Fit. Everything from spoilers to suspension packages is offered, the latter of which transforms the wallflower hatch into an eager dance partner.

The key to unlocking the Fit's fun potential is HFP's noticeably more aggressive springs and dampers. With a front spring rate about twice as stiff as stock and rears about 2.5 times stiffer, the car's body flattens out during cornering and the tires bite into the turns. A ride-height reduction of 10 millimeters drops the center of gravity for added road-holding ability. Even the gimmicky HFP titanium shift knob is weighted perfectly to snick the shifter into place with every gear change.

With these mods, the steering feels more engaging, despite the fact that no physical improvements were made to the system. Inputs to the wheel are paid in kind with quick and natural responses. Communication with the road is direct, and the car feels lighter on its feet, nimbler, keen to plant itself into the cornering line of your choosing and follow through. 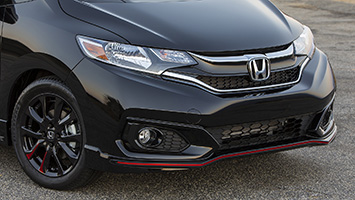 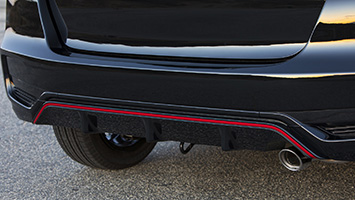 The same goes for accelerating and stopping. No changes were made to the powertrain or brakes, but the lack of squats and heaves provide a more direct sense of the car's movement. Over and over again, the feeling the HFP Fit evokes — and this is a complement of the highest order — is that it handles like a 1990s Honda.

Sporty versions of road cars typically gain only a nominal uptick in the suspension department in an effort t keep reasonable ride comfort. The HFP Fit isn't spine-jarring, but it might elicit a comment or two from the average non-enthusiast passenger (you know who they are). It's like an aftermarket suspension package, except that it's been tested by Honda engineers as thoroughly as they would an Accord capable of 200,000 miles.

Honda hasn't announced pricing on the HFP kit yet, as it won't be available until September, but they estimate it'll be around $2,600. That will include black and red wheels exclusive to HFP. If you're mechanically inclined and can do your own wrenching you can probably piece together an aftermarket solution for less, but those bolt-ons may not have the balance engineered into HFP setup. 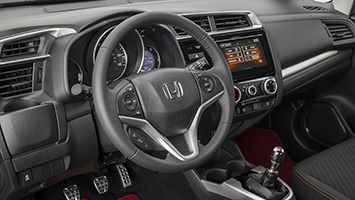 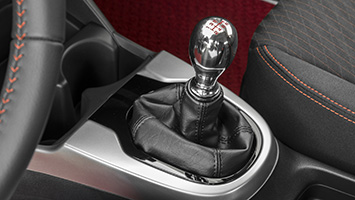 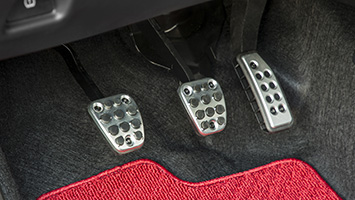 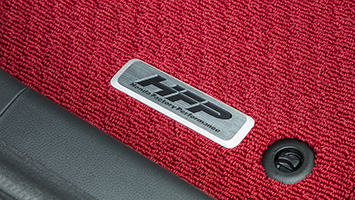 We understand why Honda chased the customers it did. For every on-ramp Senna there are dozens of dog lovers, liberal arts professors, and responsible parents buying Hondas for traits like bulletproof reliability, fuel economy and intuitive ergonomics. The 2018 Fit secures its lead in a very competitive segment by giving these buyers more of what they want — class leading safety, technology, and the still-superb functionality and interior cargo volume the Fit is known for. It really feels like a more expensive car.

For the population that prizes Honda's famed old-school driving dynamics, there are now options. Would it have been better, as was the case with Civics and CRXes, to have the sweeter, confidence-inspiring suspension baked in right from the start? Absolutely. After all, even accountants could benefit from better handling, even if they don't yet know it. The Honda Fit now hews more closely to Honda's engineering ethos. We're just glad Honda recognizes there are still some of us who care.