At a well-decorated warehouse just off Hollywood's Sunset Blvd., a gaggle of PR, design, operations, and executives from Rolls-Royce Motor Cars are stoking our excitement for the all-new, 2018 Rolls-Royce Phantom VIII. Along with the normal Rolls-Roycey words like "heritage," "brand," and "bespoke," was a repeated phrase. A phrase that shouldn't be necessary. A phrase eliciting a concept that should be obvious if true. The new car, it said, was "not an evolution" on the current Phantom. That, friends, is exciting to hear.

Don't get us wrong, we like the train-engine-bolted-to-a-horseless-carriage look, and the beast's scale and presence on the street. Trouble is, since the car first took to unsmoothing our air with its cathedral-facade front end in 2003, the looks have gotten a little, um, tired. Blame the mercilessness of time. Blame the success of the car, which means they're on every street corner in west Los Angeles. Blame the "imitation-is-the-most-sincere-form-of-flattery" Chrysler 300. Blame the fact that this car's magnetism vaults it into the public eye more frequently than a Kardashian. Whatever the cause, fact is, the Phantom needs a reboot. A subtle evolution a la the last Bentley Continental won't do.

The lights are out. We're led through a darkened antechamber into the full-dark of the warehouse. We can see the shape. It's big and has the classic squared off D-pillar. The front, too, has the required grille bigness. It is enviously long.

Let's pause. Here at Autoblog, we're known for giving people advice. We take that responsibility seriously, because the results of our evaluations and expertise are often the reason someone has dropped thousands of dollars on a car they're going to live with for many years. We try to keep it on cars and to not to get too preachy on the life coaching.

We're going to break that convention now. Here's a life pro tip: The more frequently that someone in a position of power repeats a claim, the more likely it is that that claim is false. 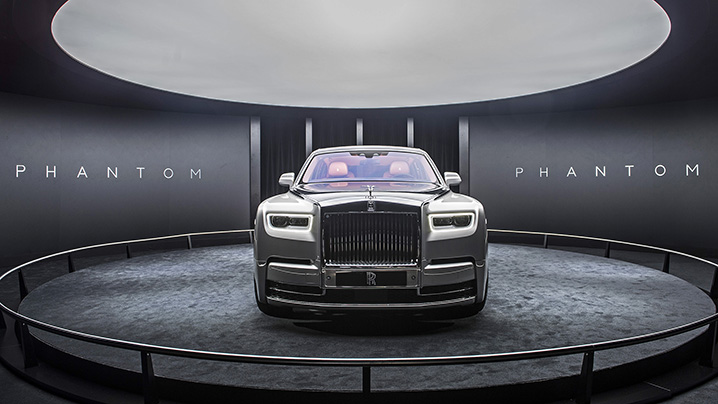 The lights click on. The men and women of Rolls-Royce, for whom this project is a true honor, clap in genuine appreciation and reverence for what they've been a part of. And the journalists in the room turn to each other and mouth, "Wait, is this the new one?"

If you're casually familiar with the current-gen Phantom, based on seeing them pull into the club as you wait in line, then this new one will likely register as just another Phantom when it hits the streets early next year. Even if you're used to seeing a Rolls every day, you'll still have to squint a bit to see the changes.

Up front, the trademark grille is taller and wider. It was impressive before; it's impressive now. As always, this faux radiator is topped with a Spirit of Ecstasy that can be silver, gold-plated, or illuminated polycarbonate. We're sure if you asked nicely (with your Amex black card), it could make the winged woman out of whatever you wanted. 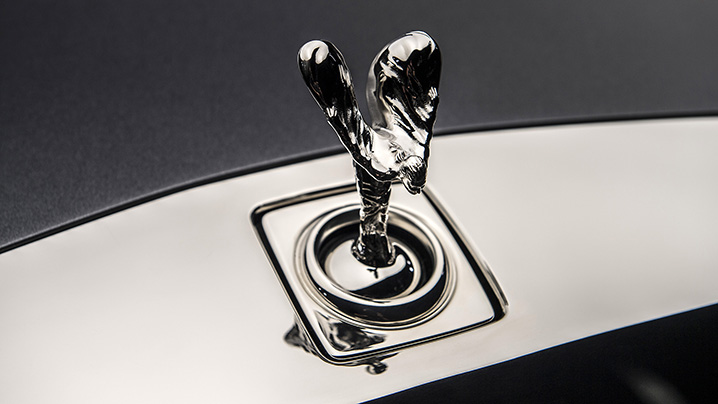 It's not just the grille that's taller, but the entire front of the vehicle is a bit more imposing than before. If you look at the old Phantom in profile, you'll see that the nose seems to drop off aft of the front spindles. The new car fixes that. It's a minor detail, but from the back of the trunk to the front bumper, the Phantom VIII has a continuous rise. The designers want you to envision a yacht powering through a harbor; we see a big car hunkered down on its 22-inch rear tires. Which, we think, is better than a boat.

Though Rolls-Royce doesn't like to brag about this (it's probably off-brand), this next-gen Phantom is actually, gasp, shorter than the car it replaces. It's only a few inches trimmed off the front of the car, and you'd need a ruler to confirm it, but it's true. Open the hood on the old Phantom and you'll see a lot of excess space ahead of the naturally-aspirated 6.75-liter V12, and then even more space ahead of the radiator that even non-vehicle-engineers could see is superfluous. Rolls didn't open the new, gorgeously domed hood – by far the best change to this new model – for us, which is a shame; we want to see how it got the same amount of cooling hardware in a smaller space along with the new turbos. 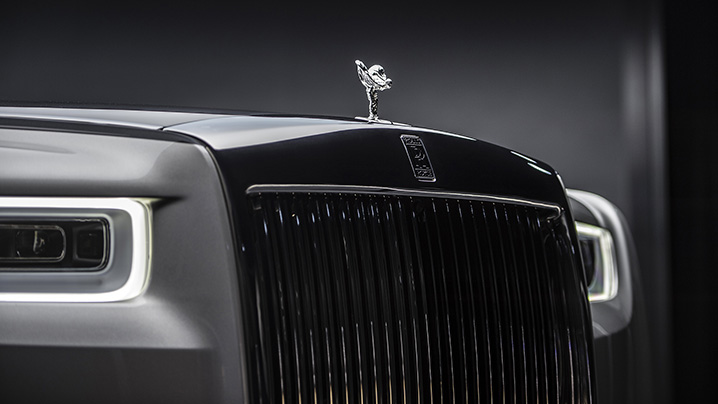 That's right, the Rolls-Royce Phantom VIII doesn't breathe on its own, but rather receives the assistance of a pair of turbochargers bolted to a Rolls-don't-round-up 6.75-liter V12. Horsepower output of the new engine is up to 563 bhp from a slack 453, while torque is at 664 pound-feet, up from 531. Rolls claims a 0-60 time of 5.3 seconds for the normal, 227.2-inch-long car and 5.4 for the 235.8-inch extended wheelbase version.

Combine that new, efficient V12 with an aluminum-intensive construction that largely offsets weight gains from things like four power doors, the taller roof, more sound dampening, etc., and you wind up with a claimed 10 percent improvement in fuel economy. This allowed Rolls to drop in a smaller, 23.8 gallon (vs. 26.4) fuel tank while providing the same effective range. Surely that was amongst the complaints Rolls received from Saudi princes.

Truthfully, Middle-Eastern customers did have a complaint about the old Phantom: There wasn't enough room to get in and out easily while wearing a keffiyeh (traditional headdress). That situation has been addressed, specifically for this complaint, by slightly stretching door apertures and adding more headroom. But don't worry, the roof of the Phantom still has over 2.5 inches of sound-insulating foam in the headliner to keep out any noise. 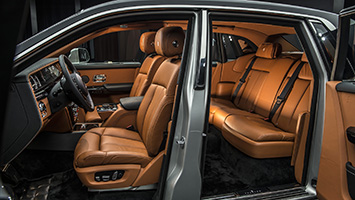 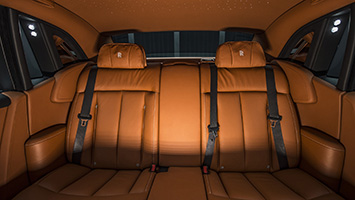 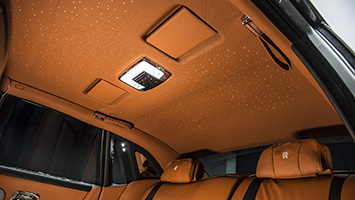 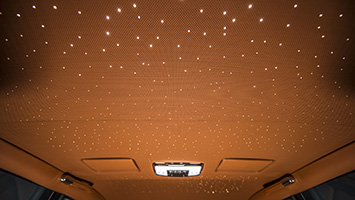 While the rear seats, which Rolls calls the "suite," are the money zone for a Phantom, nothing in the back of this new car feels particularly new. It's all lovely, and the materials are impeccable, it's just that the styling and features are exactly what we expect from the current car. Deep lambswool. Baby-soft leather. Real wood. Phantom customers, says Rolls-Royce CEO Torsten Müller-Ötvös, aren't looking for hyper-connected mobile offices; they want to relax and get away. To this end, Rolls has succeeded.

For front-seat occupants, there are at least a couple of new tricks. The first is the new 12.3-inch TFT display digital instrument panel. We're not surprised by this as parent company BMW has been rocking large digital IPs for a bit now and we'd seen spy photos that clearly showed this change. It works, but it's far less refined than the physical sweepers in the Wraith and current Phantom.

While it makes financial and technical sense to use available parts, the digital IP is one of a few things inside of the Phantom that strike us as a sign of corporate compromise. Others include the lightweight plastic controls for the HVAC (vent registers are drool-worthy single pieces of milled metal), and the same iDrive controller and stalks you'll find on a BMW. 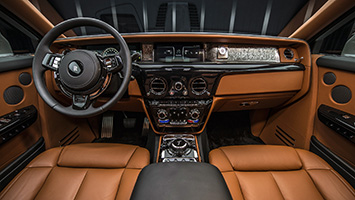 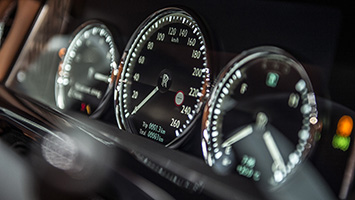 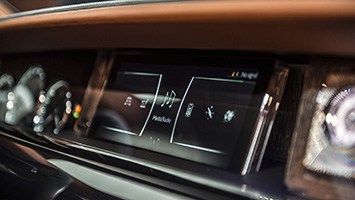 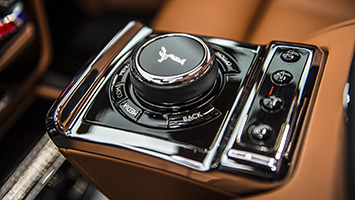 Front-seat passengers are also treated to a new dash experience, The Gallery, which was inspired by Rolls' customer's fondness for putting high-end art in their boats and planes. Nestled into the dash immediately to the side of the instrument panel is, effectively, a shadowbox complete with glass front. This area is designed to be a showplace for Phantom owners to commission bespoke pieces of art that are impressive or important to them. On display were handmade porcelain flowers by Nymphenburg. To save you the Google search, Nymphenburg is a German porcelainery that has been making high-end porcelain art since the 18th century. To save you a second Google search, yes, we just made up the word porcelainery.

If handmade flowers straight out of your wealthy grandma's cupboard don't strike your fancy, Rolls also showed off a "gold-plated 3D-printed map of an owner's DNA created by the enfant terrible of German product design Thorsten Franck." We suggested that they cut a hole in the top of the dash and allowed owners to treat it like a piggy bank, stuffing it full of Gold Eagles, Krugerrands, Maple Leafs or small gold bars. We also suggested treating it like a an ant farm or as a place to keep specially trained, anti-theft bees. (Please provide your best suggestion for this space in the comments.) 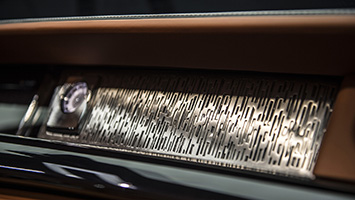 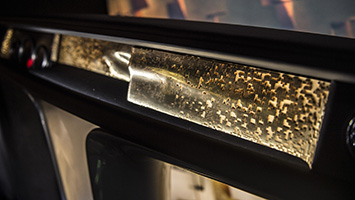 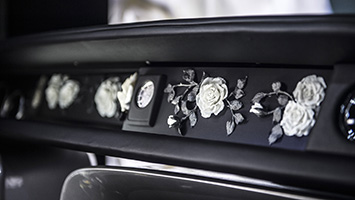 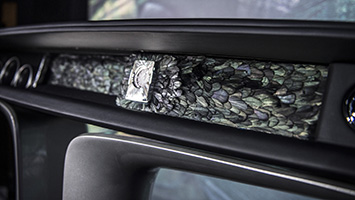 Right there, smack in the middle of the door on the 2018 Phantom is a relic we just don't see on cars in the US anymore: a door lock. It's silver and round and obvious. Other cars, luxury or not, hide these behind block-off plates in the door handle. Rolls didn't. It turns out that leaving the locks there and exposed was a deliberate, thoughtful decision. That Rolls Royce thought their customers would appreciate the mechanical, familiar look and access should the remote fob ever die.

The Rolls-Royce Phantom VIII is an anachronism. It's a high-end record player in a world of streaming music services. But, thanks to the success of the Wrath and the Ghost and the certain success of the new Rolls-Royce Cullinen SUV, it exists. It exists to serve "Kings and Queens and titans of industry" as Rolls liked to repeat, for as long as those types still have the money and lust for wood and leather and quiet and, in this case, a whole lot of familiarity. 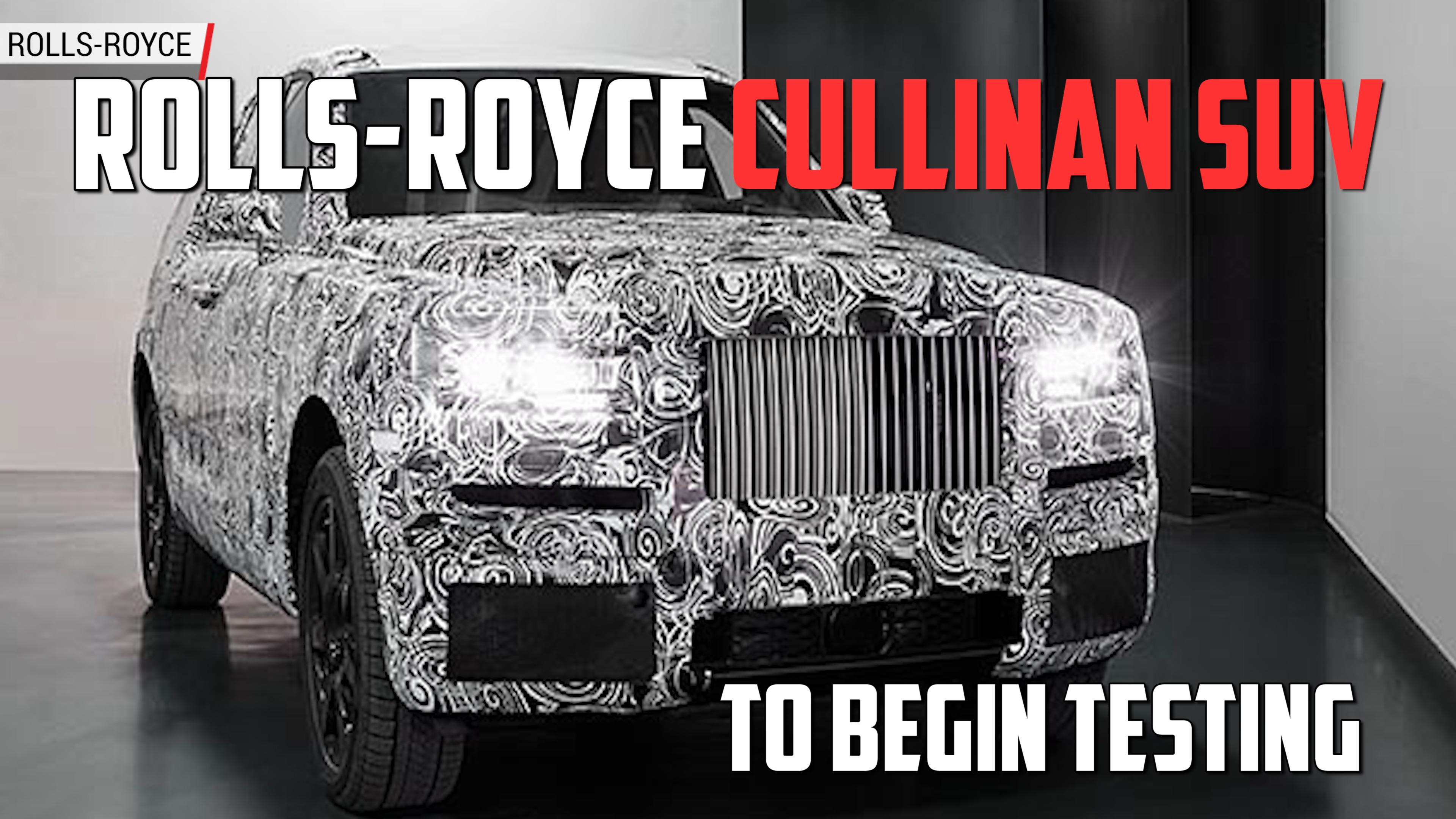