Bartender, pour me a gin over Harley-Davidson motorcycle parts

Joel Stocksdale
Have you ever looked at your liquor cabinet and thought, "I wish someone's old motorcycle parts were in the bottles"? No? We didn't think so. But Harley-Davidson restorer and parts dealer Uwe Ehinger apparently did, which is why he now sells dry gin in bottles that also contain vintage Harley-Davidson parts. Ehinger is also, according to his company's press release, known as "The Archaeologist" because he goes all over the world finding old Harleys and their parts, and the gin bears his nickname.

In the first run of this gin, three different bottles were available. You could choose the 1939 Flathead, 1947 Knucklehead, or 1962 Panhead. Inside each bottle are parts from the real respective vintage motorcycle. Examples are camshafts, nuts, and rocker arms. But don't worry about the taste of motor oil or parts cleaner getting mixed in with the gin. The parts are cleaned and then sealed with a tin alloy to make sure the liquor isn't contaminated. The bottles come with vintage-style labels, a wrapper with the story of how Ehinger found the particular motorcycle, and a tag with the parts' serial numbers. 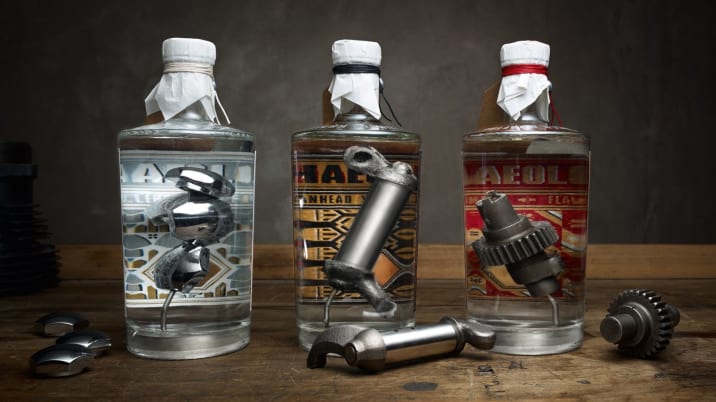 This gin doesn't come cheap though. The first run ranged in price from just over $1,050 to nearly $1,300 at current exchange rates. That's quite pricey for what seems like a bit of a gimmick, though we suppose once the gin is gone, you're left with a nifty display piece. Regardless of what we think, there's clearly a market, since the first run is sold out. But Ehinger will be selling a second round and is taking orders. Tell us what you think of this Harley liquor in the comments.