This, landlubbers, is a hagfish: 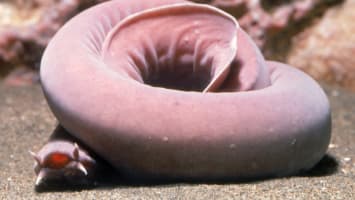 Yes, it is every bit as horrific as it looks. Often compared to Slimer, the specter in Ghostbusters that slimes Bill Murray, the hagfish, aka the slime eel, suffocates its enemies by covering them in clouds of repulsive goo. It's hard to feel sorry for a shark, but a slime eel can even gross out a shark.

That's only one of their worst traits. If ever these 300-million-year-old freakshows happen upon a whale carcass in the deep, they latch onto it with their creepy mouths - which look so much like the alien in Alien, that we're sparing you the sight. The slime eels bore into the whale and devour it from the inside out.

Ah, but in South Korea, somebody, somehow, considers these snot monsters a delicacy. And that's how 7,500 pounds of them happened to be driving down Highway 101 near Depoe Bay, Ore., on their way to whatever nightmarish market stocks them. Ever motored down scenic 101 as a summer tourist? You might have had a truckload of slime eels in your six.

And that's what happened Thursday, when the driver of the slime-eel truck (worst job title ever) jammed his brakes at a road-construction site, and his load shifted, causing hagfish to "fly across the highway," the state patrol said.

There was a chain-reaction crash involving four other vehicles and some minor injuries - and some major sliming. They say that if hagfish slime gets on your clothes, you should just throw them away. That may be what happens to the sedan in the image above.


A "single hagfish can fill a 5-gallon bucket with slime, seemingly instantly," wrote Dr. Andrew Thaler, who quickly generated this helpful post, "Your car has just been crushed by hagfish: Frequently Asked Questions." The stuff is so tough, scientists are trying to use it to create Lycra. 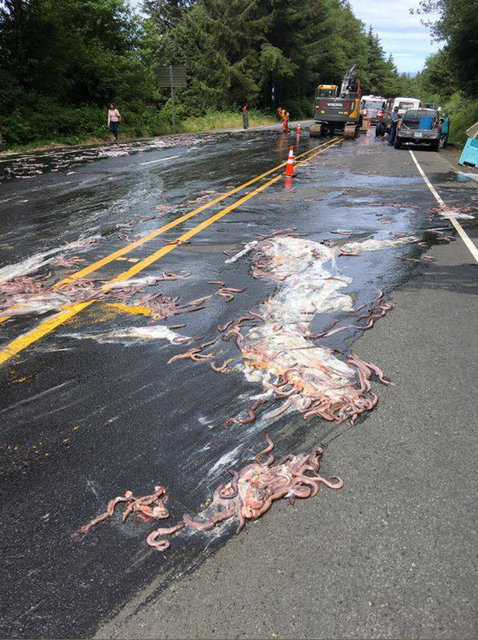 In an email to The New York Times, Thaler equated the stuff to "Spider-Man's webbing crossed with a jellyfish."

Department of Transportation workers used bulldozers to remove the fish and hoses to blast away the slime. The highway was closed for seven hours during the cleanup. But the memories will last forever ...


We're signing off for the evening, but I doubt we'll sleep tonight because...#eels