David Boldt
If Fiat Chrysler Automobiles (FCA) can be described as on a roll, it's not by virtue of Fiat or Chrysler. The Fiat brand continues to struggle, with a restricted lineup and fragmented dealer network. The Chrysler brand is reduced to two models: an all-new Pacifica minivan and a 4-door sedan – the 300 – desperately in need of a revamp. And while Dodge is building interest via high-performance, its platforms are dated. The only real excitement is within the Ram and Jeep ranks, where global growth is fueled by cheap gas and a wealth of new intros.

The newest Jeep is the Compass, and while classified as a compact, its size, interior room, and powertrain overlap nicely (or confusingly) with its midsize sibling, the Cherokee. And given their close proximity in price – the Trailhawk Compass starts in the high $20,000s while the Cherokee begins in the low $30,000s – they both could easily appear on a buyer's short list.

Jeep Cherokee Trailhawk: This is an interesting crossover entry on many levels. You could begin with its polarizing sheetmetal. If, as a Jeep loyalist in 2014, you had expected the two-box profile of its wildly successful predecessor, you'd have missed the mark by an off-road mile. With a front-wheel-drive/all-wheel-drive platform housing a transversely mounted four or (optional) V6, you could store a small refrigerator in the new Cherokee's front overhang. And the previous Cherokee's slab sides and expansive greenhouse have morphed into aggressively sculpted sheetmetal and essentially no greenhouse. Yet we've grown to like it, but only as a jacked-up, big-wheeled Trailhawk. If considering the more street-oriented, front-wheel drive Cherokees, you'd do well to cross-shop. 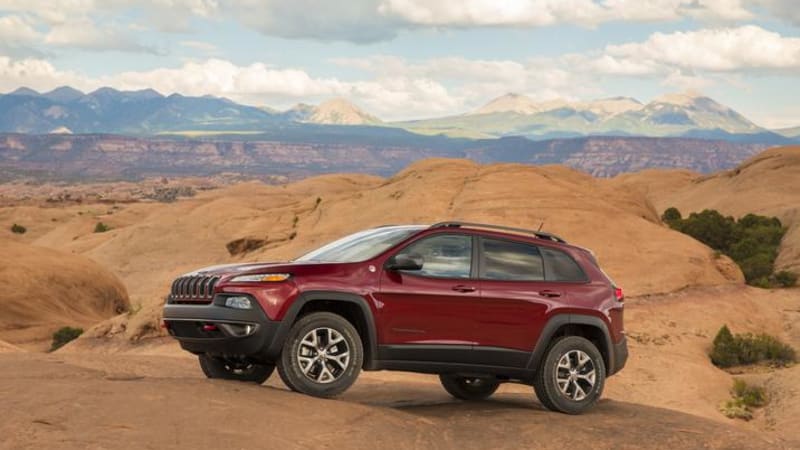 Inside, the Cherokee Trailhawk impresses. Its design and details hit above the competition, and the Cherokee won Ward's Autos 'best interior' at the time of its introduction. The Ward's team gave a shout-out to an interior "roomy, comfortable, and boldly styled with highly sculpted shapes and contrasting colors. Fold-flat rear seats add lots of utility and the Uconnect system is the best in the business." Our take is similar, and while in its fourth model year you could expect a refresh soon (make that very soon), there's little wrong with this introductory baseline.

With roughly 25 cubic feet of space behind the second-row seat, you won't be blown away by the Cherokee's cargo capacity. Fold the rear seat down, and that expands to 55 cubic feet; still no cigar, but adequate for two-up touring. Of course, adventure-oriented Jeep owners will know the 800 numbers for their Thule and Yakima retailers; stowage atop the Cherokee is a given.

Under the Jeep's hood is your choice of a 2.4-liter four or 3.2-liter V6. It's the V6, of course, separating the Cherokee not only from the four-cylinder Compass (and CR-V and RAV4 and Hyundai's Santa Fe Sport), but affords the Cherokee an on-road composure you don't often see this side of $40K. It delivers 271 horsepower and 239 pound-feet of torque, providing easy, responsive acceleration and relaxed cruising capability. And its efficiency (18/24/21) is not too far removed from the Compass' four. The upcharge is $1,745, but would be a deal at twice that. With only the V6 added to the Cherokee Trailhawk trim, the Jeep's MSRP was $34,690. With incentives, customers should anticipate a transaction price of just over $30K.

Jeep Compass Trailhawk: All-new for 2017, the Compass expands on the urban/suburban theme pioneered – after a fashion – by the smaller Jeep Renegade. Built on what is essentially the same platform, and sharing its 2.4-liter four, the Compass offers a more substantial footprint – relative to the Renegade – at a more substantial price.

Jeep's design team dialed back the themes used on both the Cherokee and Renegade. This is a return to the mainstream, two-box formula represented by the Grand Cherokee, and the similarities here not coincidental. Despite its compact size, you sense a more substantial footprint to the Compass as you walk up and step in.

Inside, an attractive (and fairly conventional) layout is enhanced by some soft-touch surfaces and a few we-wish-they-had-done-this-differently elements, such as the glovebox door. The gauges and control layout are reasonably intuitive, but as you start the engine via the button and move the transmission selector from "P" to "R," you don't sense a level of precision you'd hope for from a $30K transaction. Our interaction with the 2017 Cherokee was more precise and, by extension, more positive.

The key to the new Compass is its expansive interior within a still-compact footprint. Even though its wheelbase and overall length are shorter than the Cherokee's, it has just 1.3 cubic feet less interior volume. And because of its relatively high beltline, the Cherokee feels – this is entirely subjective – smaller than the compact Compass.

Under the Compass hood is the one available powertrain on this side of the global marketplace. It's FCA's 2.4-liter MultiAir2 Tigershark, delivering 180 horsepower and 175 pound-feet of torque. If those numbers seem underwhelming, get behind the wheel. Responsiveness is better than "labored," but not much better. This is 3,600 pounds propelled by 180 horsepower, for a weight-to-horsepower ratio of 20:1. And our driving was done at just above sea level; if off-roading in the Rockies, bring some oxygen - for your Jeep.

For a more analytic look, reference Autoblog's comparison tool here. With no options beyond the Trailhawk trim, the Compass will come in at just under $30,000. And the Compass is more efficient than the Cherokee V6, offering a 22/30/25 EPA estimate. If you visit a Jeep showroom, drive both. And if the drive-off price difference is less than 10 percent, point your personal compass toward the Cherokee.