Road rules for gunslingers: How military contractors use their vehicles to fight

Tips, tools and tactics of elite warriors who fight on the move. The Chevy Tahoe leaves a white, chalky trail of dust as it careens towards Shoot House 2. There are four heavily armed men wearing body armor seated inside the SUV, wielding automatic rifles, 9mm pistols and a shotgun. These weapons are loaded - and not with blanks.

The driver directs the vehicle off the dirt road and skids to a halt in front of the building. Even before the doors open, the tactics that will decide the gunfight ahead are already being implemented. The driver parks the vehicle with the rear facing the targeted building, so the team inside can dismount facing the door they mean to breach. This position also protects the driver in case the team loses the element of surprise and needs to retreat in a hurry.

Three men pop out of the Tahoe, each wearing body armor and helmets. The rear opens and the last members of the team leap out: a dog handler and security canine on a leash. The men knock down the door and loose the dog to latch onto a man inside wearing a padded suit. The team sweeps the building, storming each room quickly. The pistols cough, and paper targets sport fresh holes. The concrete mix used to construct the walls of the building absorbs bullets. The operators flow from room to room while covering each other's blind spots, popping off shots in a controlled dance of fire and maneuver.

A mix of auto journalists and company staff observe the exercise from a catwalk above the roofless, one story building. Chevy brought us here to reinforce the link between its SUVs and toughest clients: military operators who use the rigs on overseas missions. 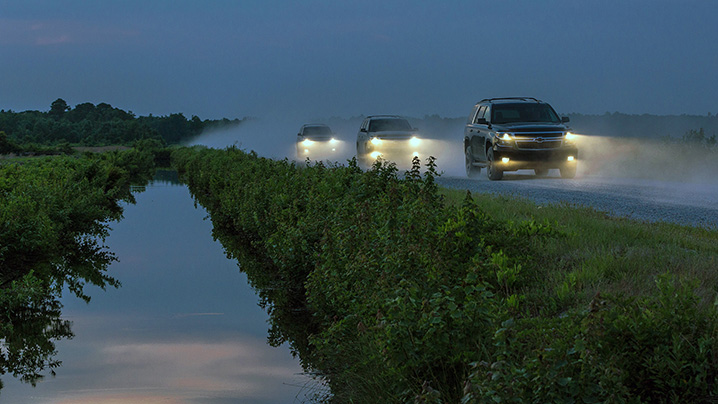 Although a small percentage of total Tahoe sales go to these customers, the luster of Special Operations can help sell vehicles to domestic law enforcement, who need proven vehicles. The general public is also not immune to military chic: Some tinted windows, black steel wheels and footage of live-fire demonstrations should also help sales.

It's also a rare opportunity to discuss the relationship between special operations troops and the automobiles they use in combat. This is the place where advice isn't based on a movie or video game.

The range and the talent are courtesy of TigerSwan International, a security firm that trains police, US military and civilians on tactical gunfighting. Part of the training they do here centers on smooth exits from vehicles to get to gunfights, as well as times they must shoot from moving cars and trucks. "What people get here is real-life experience, to see what is fact versus fiction," says Jim Reese, co-founder of TigerSwan. "Most of what they think they know is total B.S."

Reese is a retired Delta Force operator. He founded TigerSwan in 2005 to "provide business intelligence, crisis management and global stability services to governments and businesses." The firm recently made headlines when documents leaked that identified them as part of the security brought in to guard the Dakota Access Pipeline against protesters. They perform risk analysis, protect company executives, and help design secure facilities in risky places. 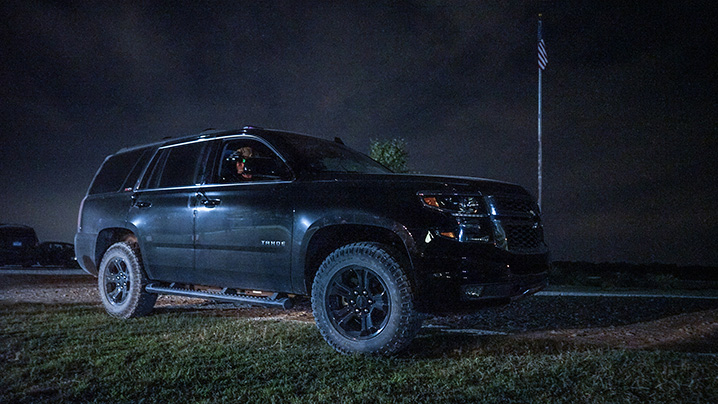 Supporters call them contractors. Detractors call them mercenaries. Both sides agree: the firm is staffed with shooters with experience on elite military teams. The gunmen at this event are all former members of Delta Force, an elite unit formed to conduct counterterrorism missions.

Chevy hired TigerSwan to host this demo on its sprawling training range, located 17 miles from Fort Bragg in North Carolina. The Range Complex, as the company calls it, is spread over 1,900 acres, plenty of room for the intensive combat exercises conducted here. The practice spaces encompass just 100 acres; the rest of the area is needed to make sure that errant bullets land harmlessly, outside of what's called the Surface Danger Zone.

"Your vehicle can be the most lethal weapon on the battlefield, if it's used the right way."

Not many Hollywood myths survive for very long when discussing the best uses of vehicles in shootouts with professionals. For example, ducking behind a car for cover during a gunfight is a bad idea. "Most vehicles don't make good pieces of cover," Reese says. "Bullets go right through."

He is in a good position to know: As an operator with Delta, which they call "The Unit," Reese once caught a bullet in the wrist while driving his commander through Baghdad.

Training is another word for experience. It's not a good idea to try something for the first time when lives are at stake. For example, training here includes the best way to drive a car away from a roadside ambush by gunmen. The first priority is to get away, to nullify the advantage the attackers gained by choosing the location. And that usually means driving forward. To do this safely means shooting out of the car's windshield, to hit or scare the gunmen outside. 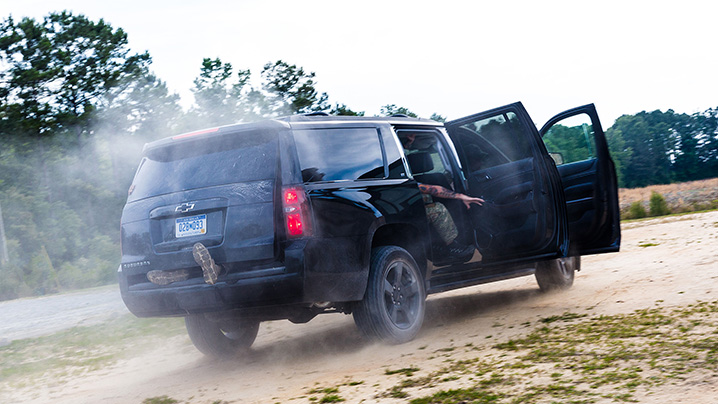 This is easier than it sounds. The ideal way to shoot out a front windshield is to make a hole with a few quick rounds, and then poke the barrel of the firearm through the hole to shoot back in earnest. But how many shots will it take to make that hole? Is the glass tempered? What's the best body position inside a car to fire accurately?

Like anything, being a badass car gunman requires training so that your body acts without hesitation. "Practice, practice, practice," Reese says. "Your vehicle can be the most lethal weapon on the battlefield, if it's used the right way."

Another lesson from the special ops world: Those behind the wheel don't shoot. "The driver is the driver," Reese sums up. They are responsible for watching everything ahead of the vehicle, scanning for upcoming threats and leery of any chokepoints. Others in the vehicle have their own sectors, areas they constantly watch for trouble. They call this "putting your head on a swivel."

The hired guns of TigerSwan have been deployed across the world and have been subjected to nearly every threat to a vehicle you can imagine: roadside bombs, gunmen posted under overpasses, suicide bombers, motorcycle drive-bys. "They usually don't even slow down," says Rick, an operator with extensive experience in cartel-infested parts of South America, of motorcycle gunmen there. (Former operators ask that only their first names be used.) 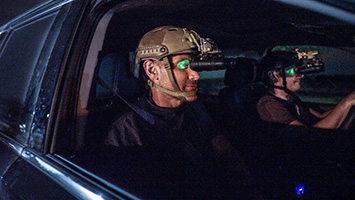 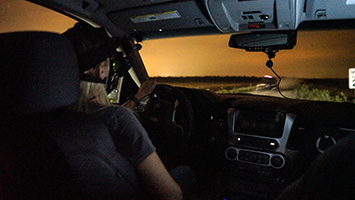 Despite all of Chevy's happy talk of delivering battle-ready SUVs, the first thing Delta Force does is tailor the vehicle for the conditions on the ground. That could mean using "bolt on" kits, supplied by third-party vendors. These vendors sometimes work with vehicle makers to ensure their solutions, like extra armor or weapons stations, will be easy to install.

Other enhancements are improvised on the spot. Two popular SUV mods in war zones emerge during separate conversations. One is cutting a hole in the roof to create a firing position. Rick says he first saw this in Beriut, where gunners wanted views above the tops of other vehicles. Others add that this became common in Iraq and Afghanistan as well. Delta operators even figured out a way to mount a heavy .50-caliber machine gun on top of the vehicle. Another popular modification: putting a seat in the rear, facing directly behind the SUV. This takes care of one of the few blind spots.

Eddie is a 23-year Army veteran with 17 years of service in Delta, and a recipient of two Bronze Stars and multiple Purple Hearts. He says any vehicle they receive in the field gets modified immediately. "We'll do the tires, brakes, lights, everything," he says. "In Afghanistan, we once replaced an SUV engine, and put in a diesel. Easier to get fuel."

Special Operations troops such as Delta, the Navy SEALs, and the Air Force Special Tactics Squadron, are known for their specialized vehicles. But oftentimes it makes more sense to blend in, and that means using indigenous vehicles to get around. In some parts of the world that means pickup trucks, but in others the black SUV is common. "In Iraq, at first, these would stick out," says Antek, who has 15 years of Delta experience. "But after a while they were common." 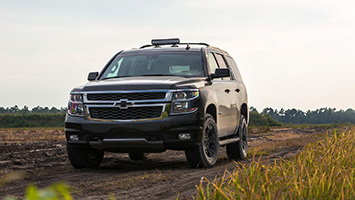 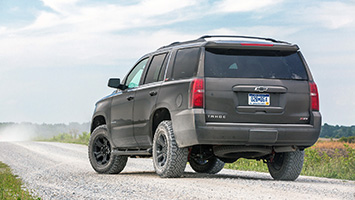 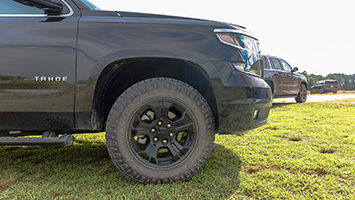 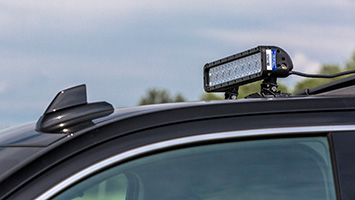 After the sun sets, a handful of Z71 Midnight Edition Tahoes arrive. They're marketed to look mean: a black mesh grill, dark painted DuraTrac tires and black bowties. The cross rails have an odd strip across the top, faintly glowing red. This is a reflector that glows like hot metal under night vision goggles, which amplifies what little light exists.

The TigerSwan operators load into Tahoe Z71s and drive into the night on a "ghost ride," headlights extinguished and wearing night-vision headsets. In the lenses, the lightless dirt road is bathed in a green hue. Every insect becomes a brilliantly lit orb. Antek drives quickly but in control, gently drifting across turns and weaving in between heavy equipment and farm buildings.

He's shot from moving vehicles before, at targets who shoot back. He has practical advice: Try not to do it unless you have a heavy machine gun mounted on the vehicle. "You won't hit anything with a rifle or pistol, if you've got any speed," he says.

The ghost ride, shoot house, and time on the gun ranges at the event are not very instructive when it comes to the merits of Chevy's SUVs for this kind of work. They are popular, sold worldwide and common in US and foreign police units. But the real lesson is in the relationship between elite warriors and the mounts they ride.

"Of course we pay close attention to the vehicles we ride in," Antek says. "They can save your life when you need them."