It may be a cartoon, but there are laws of physics to the Cars universe.

Suspension of disbelief, as a movie-going gearhead, is a fluid thing. For example, most car people are fine with the concept of using turbo Civics and a harpoon gun as an efficient way to steal DVD players from moving trucks, but they'll cringe at nonexistent parts like MoTeC System Exhausts. They're OK with Frank Bullitt's '68 Mustang easily surviving high-speed jumps and parked-car sideswipes, but they'll quickly point out that the bad guys' Dodge Charger loses way more than four hubcaps during the chase. And speaking of Chrysler products, fans of Vanishing Point see no issues with a multi-jurisdiction police force that can't catch one guy in a Dodge Challenger, but they jump out of their seats when the Challenger turns into a Camaro for the ending crash sequence.

So, while moviemakers have some leeway, the (selectively) discerning enthusiast audience doesn't have much tolerance for botched automotive details. A few films over the years have earned the stamp of gearhead approval, but the majority of car movies have been in the hey-tires-don't-make- screeching-sounds-on-dirt vein. There's nothing wrong with pulp entertainment, of course, but car nerds generally yearn for the occasional movie that just gets it right. At least one film does exactly that — it just happens to be an animated flick where the cars can talk.

Cars 3 isn't the only Pixar film to accurately represent its subject matter. Ratatouille remains a favorite of real-life fine-dining chefs, and Inside Out has been lauded in psychology journals. But, thanks to the folks behind the scenes, the Cars franchise is likely the most persnickety of all Pixar projects.

The Cars 3 staff has plenty of car cred: Pixar head honcho John Lasseter grew up the son of a Chevy parts manager and earned his early gearhead stripes in the form of cruising-related tickets on L.A.'s Whittier Blvd. Staffers specific to the Cars franchise were similarly pre-qualified: Creative director Jay Ward is the co-founder of the highly respected Billetproof car show and is active in the local hot-rod and vintage-scooter scenes. Production designer Jay Shuster, a Detroit native, is the son of a 43-year veteran of GM Design. Producer Kevin Reher drives a Focus RS. Characters supervisor Michael Comet is an autocrosser. These are the kind of people who make movies where tires only screech on pavement.

The Cars franchise began with the ex-NASCAR — er, Piston Cup — racer Doc Hudson showing the circle-track ropes to young hotshot Lightning McQueen. There was a heady sense of history in the first film, as if old quarter-mile-oval racers were the Washingtons and Jeffersons of the Cars universe — but this sense mostly disappeared in the hectic and modern Cars 2. The franchise comes full circle for its third installment, where audiences are brought back to Doc Hudson's world of Piston Cup days gone by, by way of Lightning McQueen's personal quest to understand how a newer batch of racers has left him behind.

Much like Lightning McQueen's surroundings, the behind-the-scenes production environment has changed since the first Cars hit theaters in 2006. Like real-car design studios, Pixar uses traditional sketches and clay models in conjunction with computer modeling systems, but major post-'06 developments to digital animation technology directly impacted work on Cars 3. Advances to animation software that calculates things like light sources and reflections meant that many of the characters from the original Cars had to be updated with more detail — for the first Cars, it was OK to designate a headlight as a bright and shiny object, while the Cars 3 team had to design a complete headlight assembly with bulb, reflector, and lens in order for the software to properly process the design. If that sounds like the designers had to build the Cars characters component-by-component as one would design a real car, well, essentially, they did. 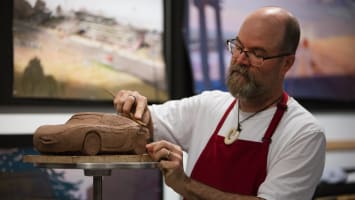 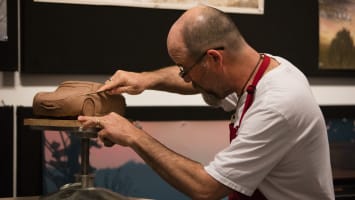 Of course, there's one major difference between the Pixar studio and GM's — namely, Pixar's cars, well, talk — but Cars designers and animators still operate within some of the same limits. A central restriction is "truth to materials" — even though Lightning McQueen and company can move in ways that real cars can't, there are still rules. Rubber tires flex, metal wheels don't; suspensions compress and release, rigid body panels stay put. Series Creative Director Jay Ward points out that there was more literal flexibility in Mater's character: As a rough representation of an early 1950s body-on-frame tow truck, the animators could add more wiggle at the waist where the cab and bed meet. That kind of understanding of how real cars are constructed serves as an essential link between script, design, and animation. Without a separate cab, chassis, and bed built into Mater's design, that kind of movement wouldn't come naturally, or might run afoul of the truth-to-materials axiom.

Designers need to plan ahead for script or animation requirements such as Mater's wiggle, so the main Cars characters are more than mere silhouettes. "Every car has a suspension," says characters supervisor Michael Comet. The script, he explains, will likely call for the removal of tires, undercarriage shots, and other viewing angles where underlying details would be revealed. "If it's a hero car, it'll have a basic undercarriage, a driveshaft, an engine, a differential. If the animators are raising the car up or down, you're going to see something."

Several new characters make their debut in Cars 3, but these new faces begin with the written script, not with the aesthetics. Early story details are provided to the design team, and they derive the character's look based on those descriptions. Sterling, a wealthy businessman, was presented to Production Designer Jay Shuster as "the well-dressed, well-manicured man at the end of a bar," and the resulting design includes heavy influences of E9 BMW Coupe (although early concept sketches lean toward the Mercedes SL), finished in silver, with taut lines and jewel-like side indicators that are intentional representations of cufflinks. "That's referencing the tailored suits of Mad Men," says Shuster, who also notes that similar fashion cues would be used in the design studio of a real car. "It's really a parallel existence we have with the automotive industry at this point." 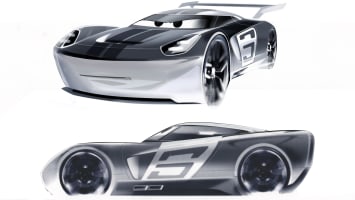 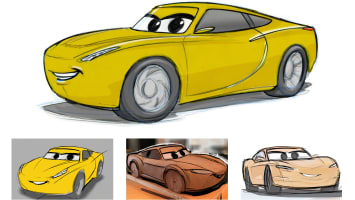 Other notable new arrivals include Cruz Ramirez, the wannabe racer-turned-personal trainer, who hints at a current-gen Chevy Camaro (although "she's got all kinds of stuff going," laughs Jay Ward). Given Cruz's backstory of the aspiring racer who never quite fit in, Ward knew she couldn't have the classic pushrod V8 sound. "So I started targeting modern, really throaty V6 engines, which gives her that raspy quality," he explains. (Ward has influenced the sounds of many characters throughout the series, even recording the exhaust note of his own '39 Mercury for use in this film.)

The most eye-catching newcomer of them all is main antagonist Jackson Storm, who was scripted as a high-tech upstart that did to McQueen and his ilk what McQueen did to his competition in the first Cars: make them instantly obsolete. Visually, this approach succeeds in a big way: Storm's creased fenders (penned with help from Ford designer J Mays), low-profile tires, and ultramodern graphics package makes McQueen's mid-2000s NASCAR aesthetic look immediately dated.

NASCAR, especially to non-fans, may seem homogeneous, with cars from the early '80s to the present essentially following the same formula of a vaguely jellybean-shaped silhouette with a few manufacturer decals slapped on to differentiate make and model. But closer inspection reveals that in the fully tube-frame NASCAR era, there are several distinct generations. During the development period of the first Cars film in the early 2000s, the state of the art was an extremely rounded, wind tunnel-influenced look, that features heavily in Lightning McQueen. At the time, this design was a futuristic departure from the much squarer themes that preceded it. But now, 11 years removed from the first Cars, the wind-cheating look of the mid-2000s design has returned again to a sharper profile, with the current Generation 6 NASCAR feeling like an implement to knife through the wind instead of cheat its way around it. 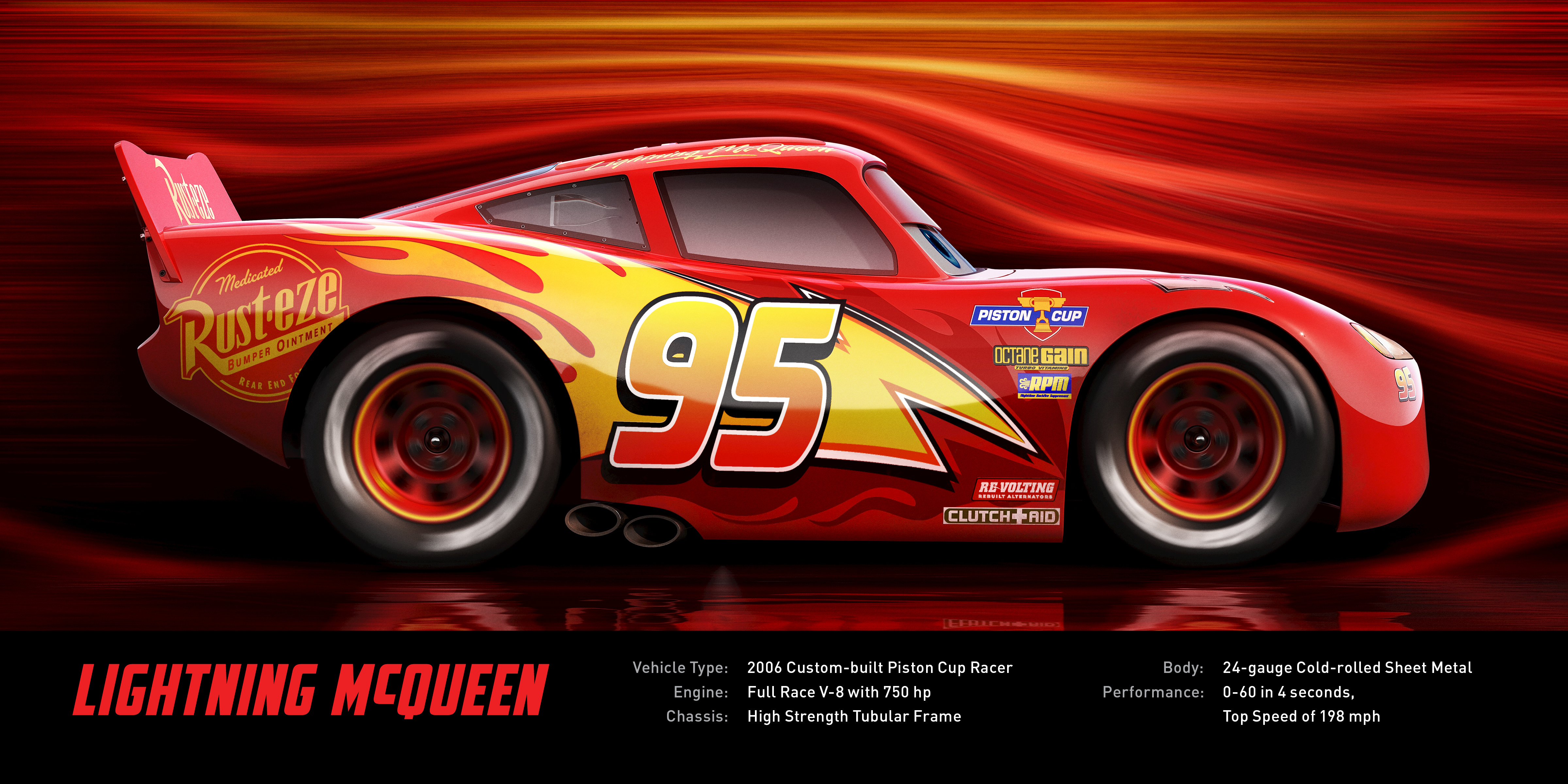 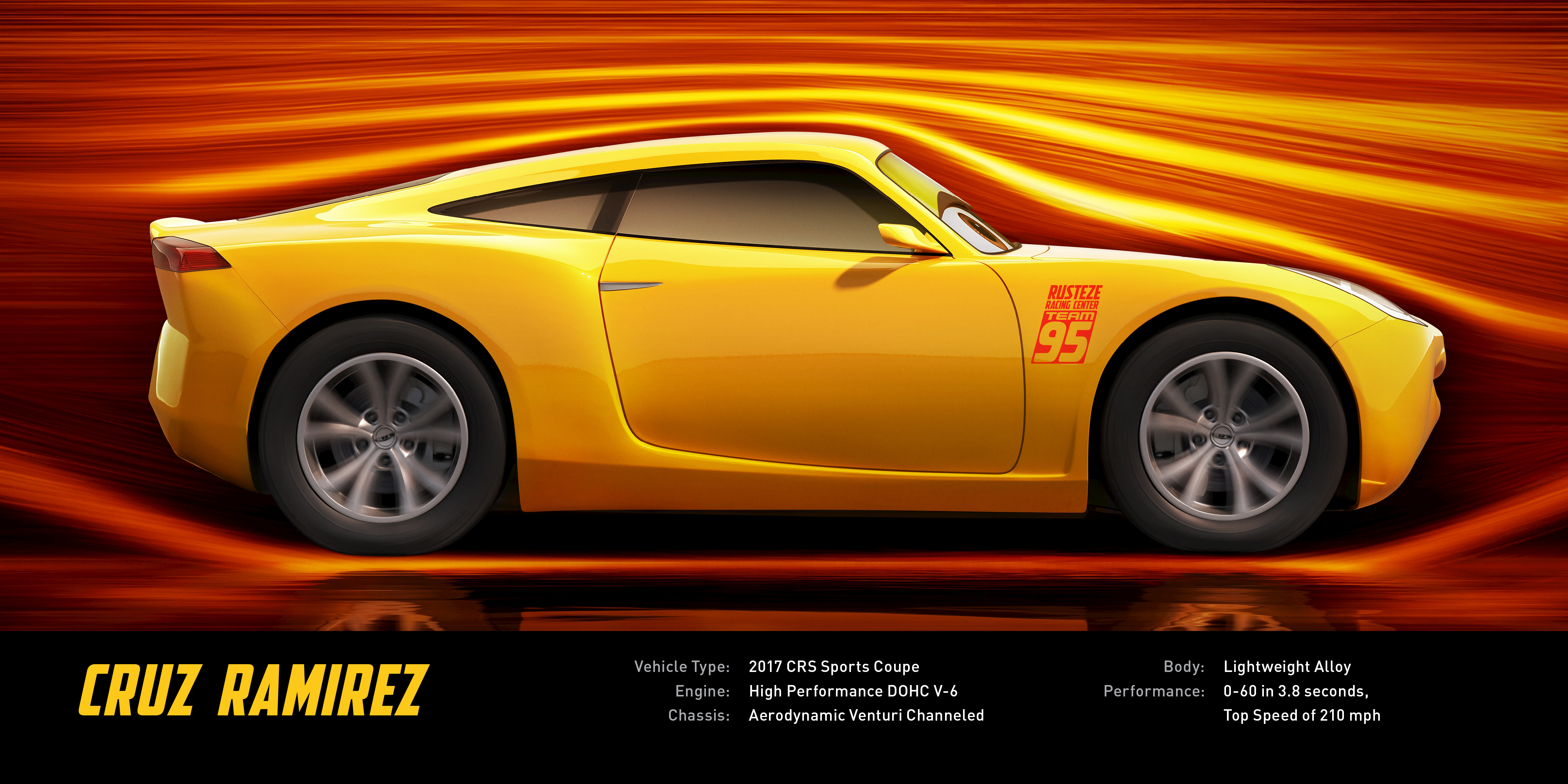 Jackson Storm takes a conceptual leap even beyond that. To take a peek at that possible future, Pixar tapped multiple championship-winning NASCAR crew chief Ray Evernham for his predictions (Evernham also had heavy input on NASCAR history, another central theme of the film). "Everything is getting sharper, with a lower center of gravity, to manage the air," Evernham explains. "That's definitely the direction the sport's going. He's not built to that old idea of 'win on Sunday, sell on Monday.' He's built to win races."

Connections to real-life NASCAR, both past and present, run deep in Cars 3, and fans of the sport can rest easy knowing that Pixar spent as much time on those tidbits as was spent on the automotive details themselves. Which, at this point, shouldn't come as a surprise. Pixar always strives to get things right, and the foundation of the Cars series is a combination of that standing goal and the widespread automotive love among the staff.

The film isn't so technical that it won't be accessible to non-car people. John Lasseter chuckles about the "Nancy Factor" — a reference to his wife Nancy's rhetorical question early on in the Cars development process, "You're not just making a movie for car guys, right?" Sculptor Jerome Ranft, who says his favorite thing about his Ford F-150 is "when it starts," speculates that one of his unwritten duties is reining in the car guys if the nerdy stuff goes too far.

But for those who care about the nerdy stuff, it isn't far below the surface. Cars 3 is one of the most realistic representations of cinematic automobiledom in recent memory, and it's really time the Cars franchise as a whole is recognized for its exactitude. After all, any gearhead that can overlook the physical issues associated with doing a high-speed jump off a San Francisco hill in a '68 Mustang should be able to look past the fantasy of animation and see the realism that exists beneath.