More than just a CC-successor.

"Never has there been a sexier Volkswagen," says Klaus Bischoff, VW's design director. Though here it's important to consider the gap between 'sexier' and plain sexy. I'm not sure the new Arteon is anywhere near the latter. But even if you aren't in the market for a mid-sized, German four-door 'coupe,' you might want to remember the way this car looks. Arteon represents the new push up-market for VW, no longer content to leave the luxury space to sister-brand Audi.

And unlike the Phaeton, this time around Volkswagen is making this shift through fashion, not sticker price. So note the Arteon's special design sauce in the way the grille segues into the headlamps, the multiple character lines up the hood which shoot up into the window graphic, and the center line which runs around the car and holds the design together. We'll be seeing these cues again on other VWs.

Wait a minute, though, what about the Passat CC (Comfort Coupe), launched in 2008, which in the intervening nine years has been through one facelift and chassis change, lost its Passat moniker and did decent business with a nod to stylish and sporting motoring?

Erm, nothing much has changed. This is a CC replacement, with 5.2 inches added to its wheelbase to make a total of 111.9 and 2.4 inches to the overall length to make a total of 191.4. Front and rear overhangs are consequently lessened and the track is pulled out 1.4 inches at the front and 0.8 inches at the back. The trunk is a hulking 19.9 cu ft and if you fold the seats down you'll get 55 cubic feet in there and loads up to 83 inches long. 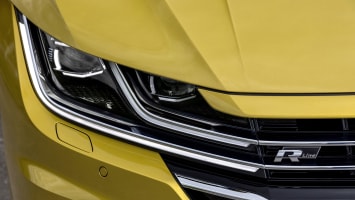 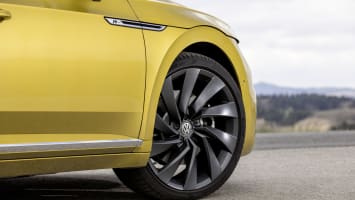 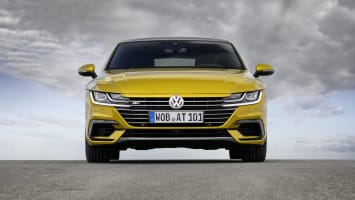 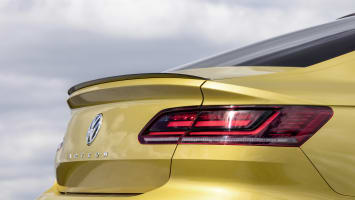 Based on the latest version of VW's transverse-engine MQB chassis platform strategy, Arteon is designed around 20-inch wheels (curious, given that US-market cars will come with 19-inch rims), which has in turn required new brakes, dampers with adjustable valving and heavily revised suspension components.

"It was a lot of money," admits Elmar-Marius Licharz, head of VW's mid and large car programs. He freely admits that such investment would not have been worth it solely for a relatively slow-selling coupe, and those costs will be amortized across global models such as a massive Multi-Purpose Vehicle planned for China and a sedan to replace the Phaeton.

Licharz might also be a man with one eye on Donald Trump's potential import tariff strategies here and their treatment of German-made imports. "The cars we produce at our Chattanooga plant are for the mass market," he says, "and the cars that come from Germany will need to push at the premium market."

"Premium" is a qualified term, though, as Licharz is well-aware of the morgue filled with corpses and brands that tried to crash the exclusive party of upper premium German manufacturers. So the theme here is substance over marketing rhetoric: good design, fine materials, and excellent drivetrains, all tempered with advanced communications and safety technology, and skimmed over with a sheen of practicality.

Arteon, for example, has the new-car-industry norm of limited self-driving up to 37 miles per hour, but also comes with some serious safety innovations including rear-end crash protection, which aligns the seats and belts in preparation for impact, cracks open the windows to optimize air-bag deployment and turns on the hazard flashers. The other key safety feature is Emergency Assist, which after exhaustively buzzing, quivering, and flashing at a suspected incapacitated (or slumbering) driver, will waggle the car in its lane as a polite warning before safely crossing the freeway and gently stopping in the slow lane. 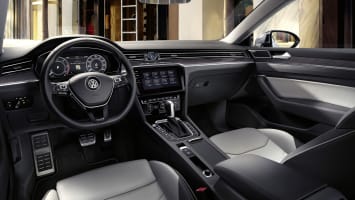 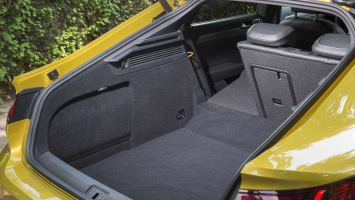 Arteon will sell to mostly male, middle-aged, married men and the prices will be largely unchanged from the CC's starting point at about $38,000. So why bother to change at all? Licharz admits that if it were just the Americas, there'd be no point in making the Arteon. "In the US, it wouldn't have been necessary," he says. It was European markets that he felt weren't being given the style, space and performance necessary to compete.

At the front the cabin is a definite step up from the CC. There are striated wood inserts, fancy-looking plastics and the latest flat-screen VW infotainment system for the center console, which has great graphics, but sadly has dispensed with the volume and map-zoom rotary dials. Seats are comfortable and large, and in the back there are acres of leg room, although the heavily sloping roof line means the tallest passengers might suffer from a lack of head room. There's a distinct impression that quality falls off as you travel down the length of the car. So while the rear bench is adequate for the class, the trunk trim is perfunctory.

There are three diesel and three gasoline engines at launch, with a turbo V6 gas engine currently under development. US sales won't start until this time next year, and of course we don't see any diesel engines in American showrooms. The most popular engine is likely to be the 276-horsepower, 2.0-liter four-cylinder TSI turbo with direct and port fuel injection, variable-valve timing on exhaust and inlet cams, and a two stage valve-lift system. It produces its peak power between 5,100 rpm and 6,500 rpm and its peak torque of 258 lb-ft start at 1,700 rpm. Top speed is governed to 155 mph and 0-62 mph is accomplished in 5.6 seconds. All the cars come with a seven-speed twin-clutch transmission and VW's 4Motion, multi-plate clutch all-wheel drive system.

Start up is quiet and the abiding quality around town (which was most of the drive route) was of refinement and fine installation, although if you rev it, the four pot rasp gets a bit unnecessary and the artificially-imposed Sport noise sounds like you've driven the car into the sea. That DSG gearbox is quite brilliantly fast and refined, and as well as a manual mode it has steering-wheel paddles to override the automatic gear selection. 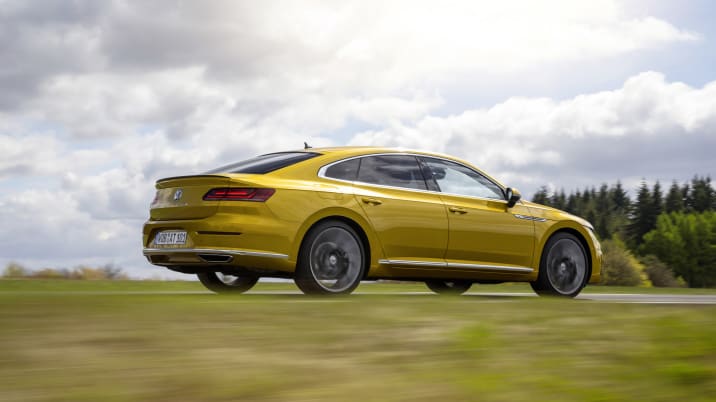 The Golf's Dynamic Chassis Control system is further enhanced on Arteon with an individual selection which goes two steps beyond maximum Comfort, or Sport in either direction. It's a bit like that Nigel Tufnel, "The numbers all go to eleven," speech in This Is Spinal Tap. It's silly. of course, because you are only picking an algorithm rather than a particular setting, but certainly there's a pleasingly magic-carpet floating sensation at 11 in Comfort.

In fact, dynamically Arteon is built for comfort rather than speed. You probably wouldn't start making a sports car with a transverse front engine, which has a high center of gravity and the mass pushed forward in chassis. (And this is why Audi, BMW and Mercedes-Benz don't.) There's not much steering feel, just a variable weight that alters with the chassis setting and while it turns in well at moderate speed, when pushed hard all Arteon wants to do is carry straight on. That said, there's confidence-inspiring grip in long corners and the brakes are lovely, with a progressive and powerful pedal, which refuses to fade.

Like the Passat CC, this is a nice undemanding place to spend a long journey, it's not sloppy and without the 20-inch wheels of the car on our European preview, you'll be spared the hammer-dropped-onto-a- work-bench reaction to surface changes and expansion joints. It is, however, a long way from sporting.

By not trying to be something it wasn't, the old Passat CC built on the proven qualities of the Passat sedan with a slightly more handsome and classy alternative. The same is true of the Arteon, but the new car is aiming higher. There's a lot riding on Arteon, and while it's certainly refined, and practical, I'm not convinced it's sufficiently different, up-market and dynamically accomplished to thrive in the premium market. In the end Arteon comes across as something that's trying rather too hard to be something it patently isn't. 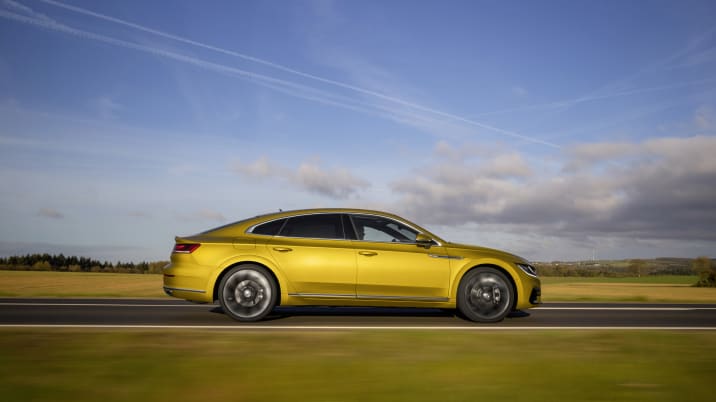 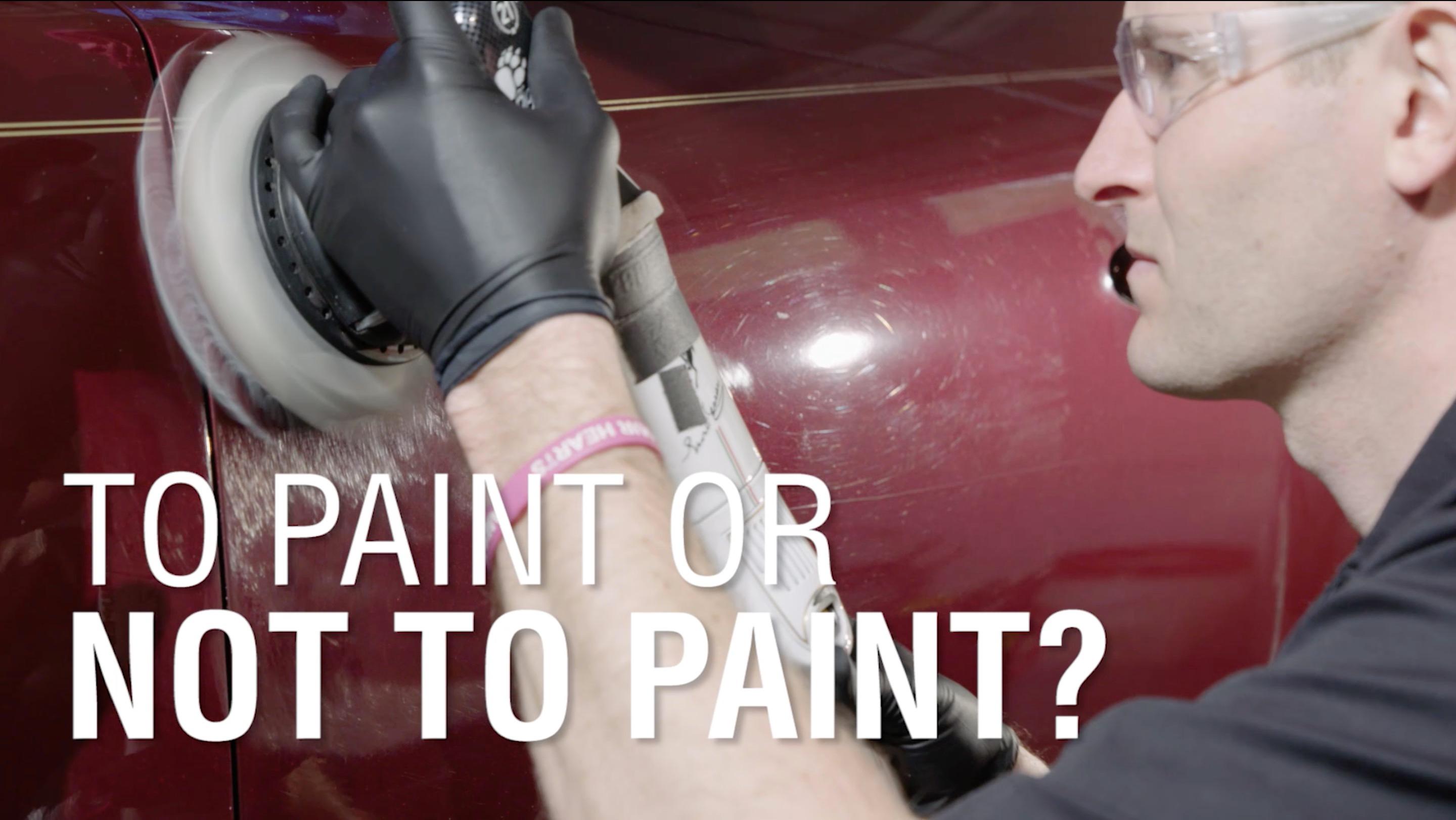