An electric car that puts the car first. 'Go west young man.' The quote, attributed to newspaperman Horace Greely, spoke to the exceptional opportunities available during America's westward expansion as manifest destiny took hold. The West was open and free; the next phase of the American Experiment. What exactly that looked like would be defined by the brave souls who cleared the path.

Fast forward to today, and we're at another tipping point. The internal combustion powertrain in passenger cars is at its peak and as technologies and perceptions pivot, the forward-looking are gearing up for the exceptional opportunities of fully electric cars in very different ways.

Tesla is hellbent on autonomy and solving the big-picture traffic riddle (and building doors that don't work right). Chevy's gone all-in on range and low-cost with the Bolt. Nissan still sells the Leaf. And then there are the startups; Small companies with big VC funding that claim the moon while praying someone in their org knows how to build a factory. 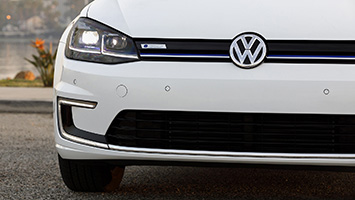 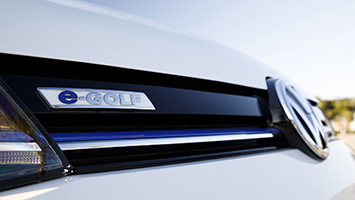 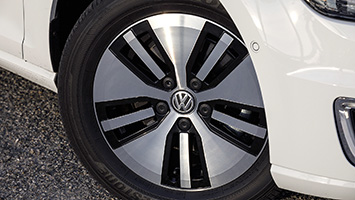 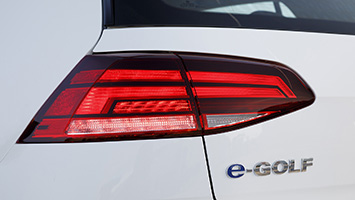 The final players are the major carmakers who don't offer a standalone EV (for a variety of reasons), but instead shoehorn electrification into an existing car. It's easy to discount these as "compliance cars" designed to meet specific EV mandates while requiring as little investment as possible. Sergio Marchionne famously claimed Fiat loses $14,000 on each 500e it sells and urged people not to buy the car. Then you drive something like the recently-updated 2017 Volkswagen e-Golf and think that this 'shoehorn electrification' was surely the right idea all along.

From the outside, the e-Golf exudes normality. The row of Volkswagen hatchbacks before us could be the lineup at any rental lot or private college in the world. Complete with all of the visual updates that the regular Golf will get for 2018 – updated bumpers, LED tail lamps, optional LED headlamps – these hatchbacks are anonymously handsome. It's almost Stepfordian. The shape is normal. The details, including chromed trapezoidal faux-exhaust rings, are normal. The colors are normal; our testers are blue or white, but there's no e-Golf specific paint job. The key is the normal VW switchblade. Besides the small badging with the lowercase 'e' before 'Golf', and some grille and spoiler changes only engineers will notice, the main visual giveaways are the wheels. These flat-faced, 16-inch rollers wrapped in 205/55R16 91H Bridgestone Ecopia EP422 Plus low-rolling-resistance rubber have some aerodynamic benefits and are only available on the e-Golf. That's the tell. Go ahead and try to remember what the wheels look like on any Golf though. We'll wait.

Step inside the 2017 e-Golf and you're smacked with even more familiarity. The leatherette seats are comfy, firm, and offer great thigh and back support. Materials are excellent and all buttons and knobs work with satisfying action. Just like a Golf. 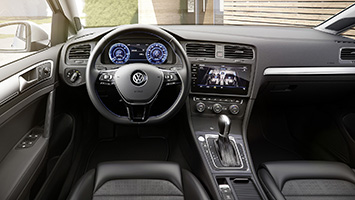 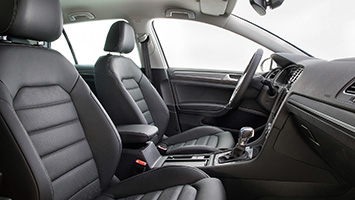 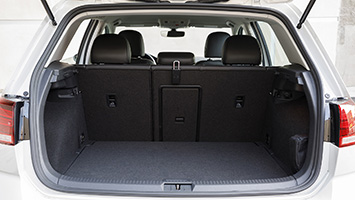 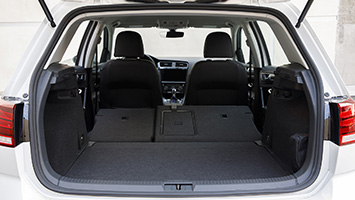 Directly in front of the driver is a three-spoke steering wheel and in front of that, two round gauge pods replete with physical needles sweeping over numbers, printed onto the dial. There's a small digital information screen between them. If you've been in a modern Volkswagen, you know this layout. To the right of the driver, is a lovely new 8-inch MIB II infotainment screen, controls for the heated seats (standard), dual-zone climate control (knobs for temp and for fan speed), and a gear shifter straight out of you guessed it, a Golf.

At first blush the gauge cluster looks standard, but the data displayed is unique. Where the tachometer would normally sit is a "% PWR X10" meter that registers zero at "idle", swings up to 10 (100%) at full throttle and dips below zero into the green "regeneration" section, on deceleration. The center display provides the all-important range information while the right pod still shows speed. It's an excellent example of upcycling clear, familiar functionality instead of reinventing the wheel.

The only other major change to the interior is that the electric Golfs have blue accent pieces. If you opt for the black interior, e-Golfs also come with bright, electric-blue stitching around the wheel and the gearshifter. Get this color. It looks cool.

Thanks to thoughtful battery packaging, the e-Golf is still a Golf when it comes to space. There's no funky hump between the rear seats or giant box-o-batteries taking up half the hatch. The seats still fold, you can still fit three across in back no prob, and it retains the normal Golf's 22.8 cubic feet of space in the cargo area and 52.7 cubes with the seats down. 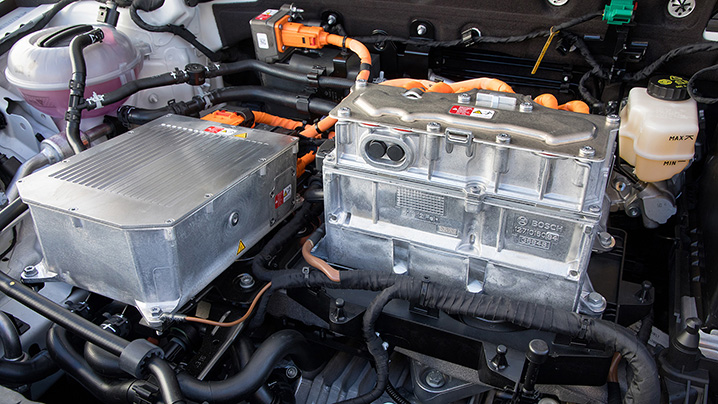 Though 125 miles of range is still about 100 fewer than you get with a Chevy Bolt, it's enough to satisfy most people's commute with a few dozen extra miles to pick up takeout on the way home. What was really surprising was the performance. EVs deliver power from lower RPM and in a more linear way than traditional powertrains, which in practice, makes them feel quicker. VW claims the new e-Golf scoots to 60 in 9.6 seconds. Our butt-dyno says this is accurate, though it reports that the power trails off somewhere over 45 mph. The effect is that the all-important 0-45 acceleration feels strong and urban passing isn't a problem. Volkswagen also claims that the 2017 e-Golf has a top speed of 85 miles per hour. We tested the car in Los Angeles and Malibu on a weekday afternoon where we couldn't have hit 85 mph if the law allowed.

That said, the Chevy Bolt is, and feels, significantly faster from all speeds – and will spin the tires for a much longer time. Where the e-Golf gets some bonus points, however, is quietness. Pin the throttle in a Bolt and as soon as you stop hearing the tire scratch, you're battered with that dreadful EV whine that makes all of these pods sound like super-sized RC cars. That noise doesn't really exist in the e-Golf. There's some, you just have to be intentionally listening for it. The Autoblog Podcast drowns it out entirely. 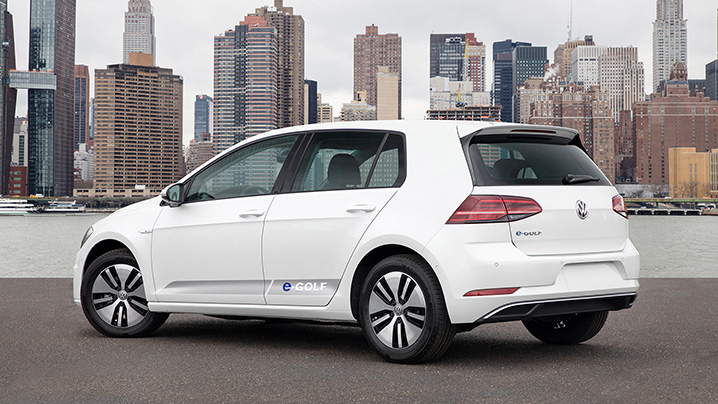 Apart from the lack of noise, driving the e-Golf is, wait for it, almost exactly like driving a gas-powered Golf. Assuming that Golf had a fat guy hiding somewhere under the carpet. The e-Golf weighs in at 3,455 pounds while a 2017 Golf S with the 1.8-liter four-cylinder and automatic transmission is 3,023 lbs. The body motions and suspension actions are exactly what you expect; firm, controlled, flat around corners and never bouncy. The e-Golf doesn't exhibit any funkiness with rebound, either, as some other EVs do once that battery weight has over-compressed the springs. Even steep speed bumps hit with the speed required to "test" the suspension don't disturb the car. This is the signature of suspension engineers who were allowed to do their job. Again, unlike some other EVs, the e-Golf can put the power down. Chock that up to the XDS Cross Differential System that debuted on the GTI.

Volkswagen has not announced pricing on the 2017 e-Golf yet. A safe estimate would be something around $30,000 for the base SE trim before the $7,500 federal tax rebate. The next step up, the Limited Edition, adds standard DC fast charging (which can charge the battery to 80 percent in under an hour) an auxiliary heat pump, V-Tex faux leather seats, and parking sonar. At the top of the e-Golf pile is the Limited Edition. This model promises an advanced driver assistance package (adaptive cruise, forward collision warning with automatic emergency braking, lane assist, blind spot monitoring and more), and the rad 12.3-inch Volkswagen Digital Cockpit instead of the dual-binnacle instrument panel. VW said that this will be a "late availability" package. We estimate that this particular style will be just about $30,000 once the tax credit is counted. As is often the case with EVs, be on the lookout for aggressive lease deals if you're in a state (California, Connecticut, Maine, Maryland, Massachusetts, New Jersey, New York, Oregon, Rhode Island, Vermont, and Washington D.C.) where the e-Golf is sold.

There are faster, sexier, more technologically advanced EVs out there with more range from automakers that don't have an emissions scandal underpinning all of their decision making. We're not sure there's an EV we'd rather have, though. The Volkswagen Golf is one of the best all-around cars on the planet today and swapping in an electric motor doesn't change that. Let the young men go West.