What's the deal with comedians and their cars?

John Krewson
'Round about the time in his life when it should happen for all of us, Jerry Seinfeld's ship came in with a force that almost split the dock. He'd been doing pretty well with his observational style ("There's a cereal now that's just cookies. Have you seen this? Cookies for breakfast. It's called Cookie Crisp. Cookies for breakfast! They oughta just call it 'To Hell With Everything!'"). But he showed no signs of setting the world on fire until he got cast in a show that was either about – depending on the level of comedy geek you ask – the average New Yorker, the very worst people in the world, or nothing.

Suddenly Jerry Seinfeld was pretty much the center of the comedy universe. And while his comedy was at once both brilliantly innovative and rooted in the mundane, his next move was a predictable grab at something exotic – he went out and bought his dream car. A rather nice 911, actually. As almost everyone knows, it didn't stop there, and the man put together one of the most enviable collections of iconic Porsches we're likely to see. So what's the connection, if there is one, between cars and comedy? 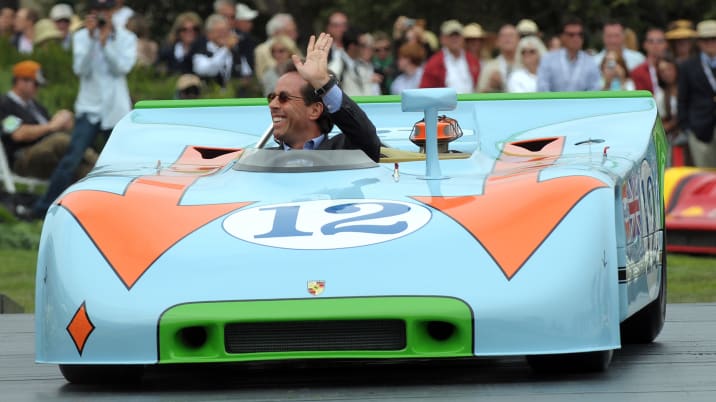 As far as Jerry Seinfeld (the man) is concerned, he's probably not the same guy as the Jerry on Seinfeld (the show) although it's hard to say for sure; his public persona is almost unnervingly well managed. But cars and comedy were the constants in his life then, and, well, just look at what the guy does now; Comedians in Cars Getting Coffee is a cultural constant, and we're certainly seeing Seinfeld the man in that one, and cars are obviously still central to his life.

And it's been that way with a lot of very, very good comedy guys. Cars seem to round out their lives, to become the yin to their comedy yang. Ernie Kovacs might not have invented visual gags or surreal humor, but he got them both to kill on television in the 1950s, so he's a comedy hero. He died behind the wheel of his beloved Corvair wagon, so he's absolutely some kind of car-guy hero as well.

Bill Cosby, the hottest name in comedy for a good long while, had Ferraris, one of two fire-breathing supercharged big-block Cobras (pictured below), and a BMW 2002tii – none of which either contributed to or in any way make up for the profoundly sociopathic creature he turned out to be, but it's still a data point. The Smothers Brothers, who defied the networks and the norms by getting blatantly political before that sort of thing was cool, went sports car racing. So sure, there's a comedy connection. 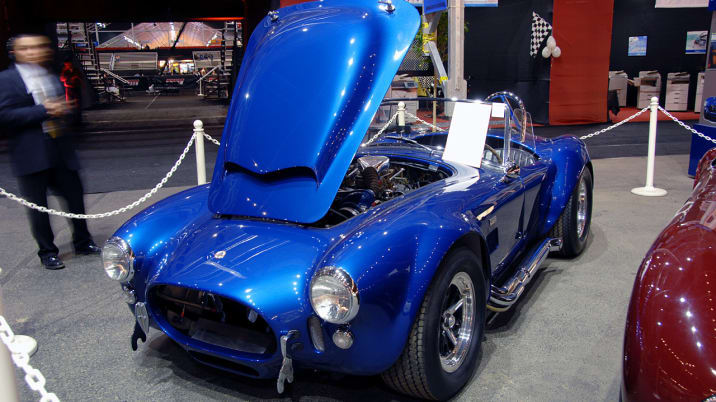 I can tell you how it worked for me, though. I worked in comedy full time for a good long while ( as a co-founding human of The Onion , no less – Ed.), and like most people in that life, full time in comedy means full time. It's an avocation more than a vocation, which means it's a calling. Comedy people would be the first to mock this idea, but most of them truly (if privately) believe that what they're doing should make the world better on some level, large or small, by working from the premise that laughing at your difficulties is generally better than crying over them.

But commitment to this idea means that thinking about what's funny, and why, expands to fill every waking minute of every waking hour. You had better love comedy, because comedy is going to be sitting in your lap and eating your lunch every day. It's a truism in the profession that you stop laughing at funny things, because no one can laugh all day – there's a reason why most comedy movies top out at about an hour and fifteen minutes. After a while, you find yourself saying "That's funny" to the person who told you the bit or a premise (and someone is always telling you a bit or a premise) instead of laughing, and it strains your sense of the subjective until "funny" is your whole frame of reference.

And the problem with that is that "funny" is subjective and personal and a shifting target. It becomes easy to lose yourself, or at least your perspective, in a roiling sea of indefinite and undefined concepts. You have a good reason for doing this; you're trying to get to the funniest and best parts, and it's not easy to tell what the best parts are. Sometimes other parts get left out, too.

Now, the stress of dealing with this overwhelmingly subjective and overthought worldview is not why the comedy community has more than its fair share of depressives and overcompensating introverts. That's a different essay. But a lot of very serious comedy people have turned to something more concrete as a way to preserve their sanity, something with a more obvious success/failure mode than you experience by sending ideas out into the world and hoping someone, somewhere, will laugh. Comedy folks have put out cookbooks and become master cabinetmakers and taken up competitive sailing just to have definite results in their lives. There's very little ambiguity when your cake tastes like dirt or your table isn't level or you're drowning. And there's no mystery as to which are the best parts. 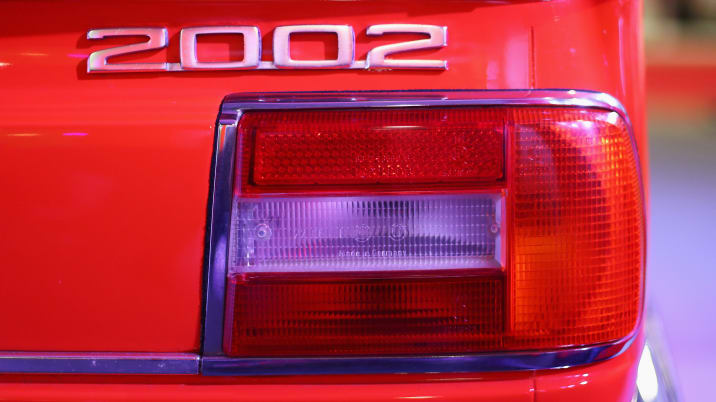 As for me, I got a 1974 BMW 2002 and proceeded to make a whole lot of objective mistakes with it. It was great, after a day of wondering if this take on that concept would make those people laugh, to have something concrete to work on, even electrical systems. The car worked correctly or it didn't. Refreshing! And healthy enough that I kept up the habit even after moderate success had me move to Brooklyn, where street-parking a silly little roadster got everyone to question my sanity, and the silly little roadster was sometimes the only thing keeping me sane. For a given value of sane; sometimes I worked on my car to help me feel a competence that story pitching meetings leeched out of me, and sometimes I drove up the Hudson Parkway just so I could scream at the top of my lungs after those same meetings. But between the car parts and the comedy bits, it was a damn satisfying time.

And, as in lots of things, style counts for a lot. Style tells. And I'm not talking design, but an overall philosophy of life. And there may be no better example of this in the twin worlds of cars and comedy crossover than Jay Leno and David Letterman.

Now, if you don't know the shared history of Letterman and Leno, what with their early friendship spiraling into a crazy rivalry, and that in turn evolving into a pitched battle to take over after Carson, and their wildly divergent legacies after that – it's all fascinating stuff, worth looking up but too much to go into here. Suffice it to say they're pretty much as different as possible, comedically and automotively. 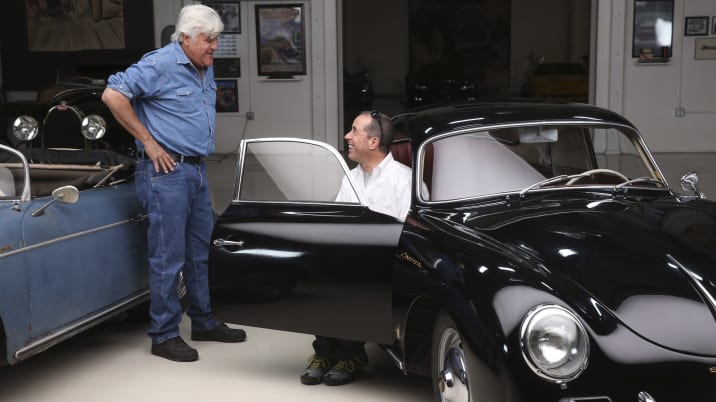 Take Jay Leno, with his open pursuit of the easy laugh, his wink-and-nod mastery of the Dad joke – and he IS a master, whether that's your style of humor or not. He may be the best inoffensive comedian who ever lived. He's also the simplest, most elemental form of car guy. With his denim exoskeleton and his fleet of, oh, everything anyone ever thought was cool, including the only surviving Chrysler turbine car, the Blastolene specials, a rear-wheel-drive Toronado and, as far as we know, a 5/8ths-scale NASCAR woody built by Smokey Yunick and paneled with bits of the True Cross – Leno is a collector. He's the collector. If there's something better than owning ten percent of North America's interesting rolling stock, Leno couldn't tell you what it is.

And David Letterman is almost completely opposite. You hear the words "edgy" and "surreal" thrown around a lot these days, but Letterman spent decades expertly guiding his audience down the line between nervousness and hilarity. He threw fluorescent tubes off roofs, nearly got kicked in the face by Crispin Glover, had pets do stupid tricks, and kept it good and weird. His motoring life was weird, too, as he racked up speeding tickets in his Converse V8-swapped Volvo wagon, which is some proper car guy behavior and no mistake. Oh, and in his spare time, he went IndyCar (and CART and so on) racing with Bobby Rahal, among others. If there was something better than being the football in the Venn diagram of fast and unsettling, Letterman didn't want to hear it. 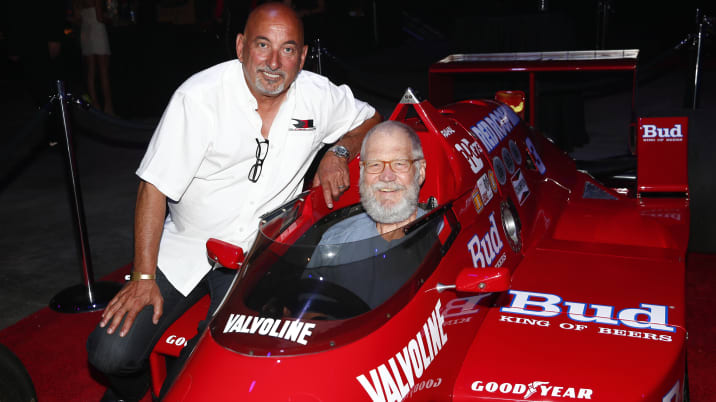 I've always treasured that polarity between Leno and Letterman, for much of my life the Ali-Frazier of comedy, and their two opposing philosophies. One's a guy who wants to be everyone's funny uncle, and who also also wants to have stuff. The other one's a guy who doesn't care if people are laughing at or with him, as long as they're laughing because of him, and who also wants to have cool experiences. Broadly speaking, that's the two major aspects of comedy and the two major sides of car loon in two indispensable people. One's a ten-page sedan comparo, plus a guy-walks-into-a-bar. One's ten-page story about a road trip to the Indy 500, plus The Aristocrats. They're two parts of a great whole. That we have them both is incredibly cool, no matter what makes you laugh or what makes your world make sense.

John Krewson worked at a little paper called The Onion for many years, and was formerly a Senior Editor at Road & Track and a contributor to The Drive .