For hauling golden retrievers, with gusto.

The 2018 Audi SQ5 is pretty simple. It's the sporty version of the redesigned Q5. It's for the enthusiast. The buyers skew male, and Audi pitches it as the solution for when an S4 doesn't meet your needs. It's a 354-horsepower purple pill for the Dad who's resigned himself to driving a crossover — but still wants to have some fun.

The SQ5 is simple, but it's also very important. The Q5 is Audi's best-seller, and a sportier sibling makes the entire family look good. The midsize crossover segment is big business, and the performance industry is hot. Archrivals Mercedes, BMW, and Porsche have formidable entries. A few years ago a hotted-up crossover was a nice thing for an automaker to develop – a bonus addition to the lineup. Now it's essential.

The SQ5 definitely feels like the right vehicle at the right time. Cruising around Vancouver Island outside Victoria, the stately capital city of British Columbia, we're having heck of a good time. The crossover, based on a platform shared with the larger Q7, feels nimble and eager. Breaking free from early morning traffic, we find the Trans-Canada Highway, cue up Dynamic mode, and take off. Dynamic mode adds heft to the steering, lowers the vehicle 0.6 inches from Auto mode, and deepens the exhaust note. It's low, growly, and sounds surprisingly good. 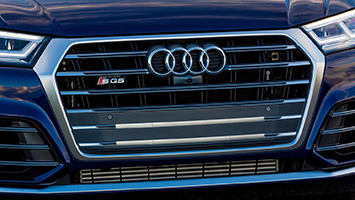 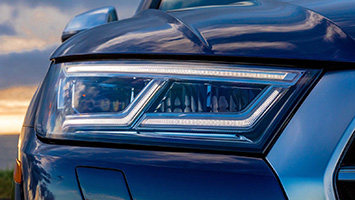 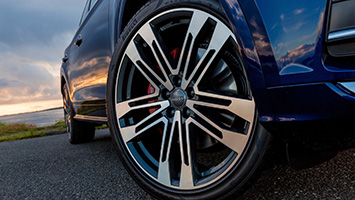 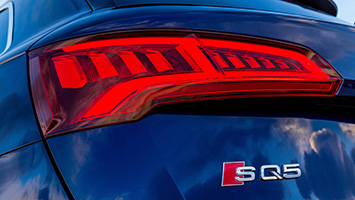 The 3.0-liter TFSI engine has plenty of punch. You know it from the S4 and S5. Like those cars, the SQ5 now ditches the supercharger for turbo power. It was a mildly controversial move as the blown motors in the S4 and S5 gave those cars true muscle-car character. We've made our peace, and turbos just seem like the natural move for the SQ5. Audi is quick to point out the wide torque curve – you get 369 pound-feet sooner than with the supercharger, and output is 23 more pound-feet than before. The horsepower remains the same, though it maxes out slightly sooner in the band. Audi says the turbo, mounted in the middle of the engine's V, makes the SQ5 more responsive, and with all of the low-end torque, we agree.

It certainly feels capable as we open it up, finding gaps in traffic, side-stepping tree haulers and deftly out-maneuvering slow-moving motorists. We find a rhythm on the Pacific Rim Highway, smoothly tackling the curves, pulling the paddles for quick downshifts from the eight-speed automatic Tiptronic transmission, and aggressively accelerating before giving way to common sense. It's a beautiful drive. Spring is taking hold in British Columbia, the daylight is streaming through the expansive sunroof, and we're soaking in the sights as we pass waterfalls, rock formations, and a stream called Cats Ear Creek. The mountains, some already sprouting green trees, and some topped with snow, beckon us forward. 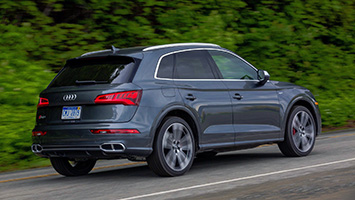 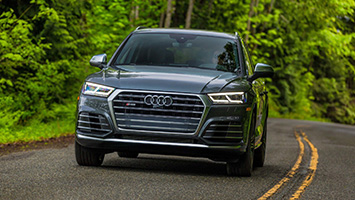 It rained briefly earlier in the day and fleeting thoughts of the Quattro all-wheel-drive system's capability crept into our consciousness. Equipped with the optional S Sport package ($3,000), the system gets a rear differential that can split torque between the rear wheels or send most of the output to one wheel, if conditions require. The sport package also adds red brake calipers and the adaptive air suspension, which offers 3.9 inches of height flexibility. Ride high in the Lift/Off-Road setting or drop all the way down in Dynamic. Or let Auto figure it out for you.

Changing modes is easy in the SQ5, just as you would in any Audi with driver select. There are two buttons to the lower right of the flat-bottomed steering wheel. The cabin is a mix of analogue and digital features, which strikes the right chord with us. The Virtual Cockpit offers a full-color interface in front of the driver. Setting the navigation using the MMI wheel is easy and the system shepherds us along the Canadian roads without fuss. It's the centerpiece of a sporty yet austere cabin. Our test SQ5 has dark surfaces broken up by silver and carbon-fiber trim. There's also black leather, white stitching, and Alcantara. They work together, and it's a good look. The Nappa leather seats with diamond stitching offer a lot of support and provide an excellent view of the road. The second row has a decent amount of leg- and headroom for an adult of average height and build, and the hatch has plenty of space for luggage and other carry-on items. As Anthony Garbis, SQ5 product manager put it, "It's really the right balance of performance and functionality."

The exterior is busier than some Audi fans are used to. There's a strong shoulder line running from the LED headlights all the way back. The fenders have slight curves, and the silhouette is like a big yet graceful hatch. The SQ5 is separated from the rest of the Q5 herd with a platinum gray single frame grille, different bumpers, a rear roof spoiler, and aluminum optic mirrors. Twenty-inch wheels are standard and the 21s offer a touch of bling. One complaint: There's a rear design element that looks like a diffuser with fake exhausts, which we think is unnecessary and overwrought. Despite the fact it's an expensive luxury vehicle with a high level of performance, the SQ5 attracts few stares during our time rolling around Vancouver Island. That's OK. It's nice to have a crossover capable of hitting 60 mph in 5.1 seconds – and no one's the wiser.

Do you need that exhilaration? That's the $12,800 question, which is the difference between the Q5, which starts at $42,475, and the SQ5, which begins at $55,275. Our tester came in at $65,800. You're really paying for the engine, which offers a 102-hp burst over the Q5's still-punchy turbo four. Factor in all the extra standard equipment on the S variant and it seems like the reasonable play if you have the means. But these siblings aren't competing with each other. The Q5 is Audi's bread-and-butter crossover making up one-quarter of its sales this year, and the market is demanding more and more of these vehicles. Though the SQ5 only made up 10-15 percent of the last-generation Q5 sales, it was a crucial slice. It made this grocery-getter just a bit cooler, while reminding Audi's rivals that it can inject racing DNA into anything. A sporty SUV is a simple notion, but for Audi the SQ5 is a vitally important vehicle. Soccer Dads won't be disappointed.