Acura tries to change perceptions. The TLX is the next step. The Acura TLX has a new face. And a rear diffuser. There's also a new A-Spec version with stiffer dampers, quicker steering, a snarlier engine, and snazzy red leather. Plus, every TLX has a revised touchscreen with Apple CarPlay and Android Auto.

That pretty much sums up the refreshed 2018 Acura TLX entry-level luxury sedan, which didn't exactly drop into the market with a splash when it launched originally. Is all of that enough to make a difference? Probably not. After a day driving it around southern Indiana and the outskirts of Louisville, Kentucky, the TLX continues to be a perfectly nice car. It's refined and the cabin is well built, but otherwise the sedan is unremarkable.

Ah, but there's more going on here than just a mid-cycle refresh. The 2018 TLX is Acura's latest effort following the revised MDX to recast itself as the maker of "precision-crafted performance" cars, inspired by both the NSX and the Precision Concept car shown at the 2016 Detroit Auto Show. It's a top-to-bottom, R&D-to-marketing attempt to better appeal to today's holy grail of customer: the Millennial.
To do that, it goes beyond the cars themselves. New Acura commercials are a far cry from an authoritative James Spader rationally extolling the virtues of this and that. There are fast cuts and three images perpetually on screen. There's pulse-pumping music, bright colors, and words like "Geek + Chic" and "Super + Sonic." There are many not-exactly-subliminal images of the NSX. There's a red Power Ranger. It's hip! It's young! It's Millennial! 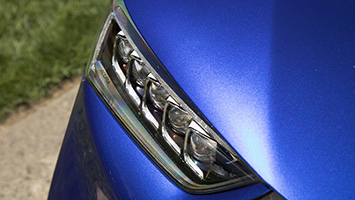 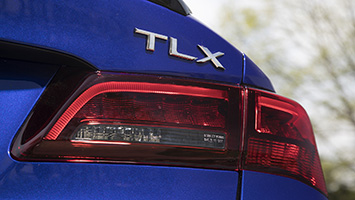 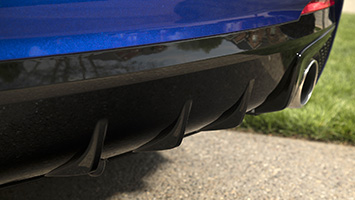 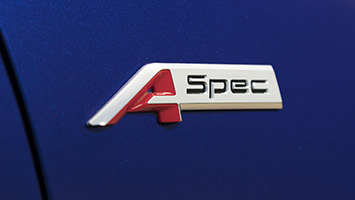 It's also a marketing campaign that has apparently connected with its target generation – well, at least in focus group ratings. "If you look at what the other brands are doing, and particularly the luxury brands, it's so serious," said Jon Ikeda, Acura vice president and general manager. "We're trying to make it more inclusive, not intimidating, more youthful, more optimistic, and more fun. We want to have fun with it. "[The commercials] are trying to set the tone of Acura in general, to make people go, 'OK, I'm interested in that, I want to go drive that.' Now it's up to us to make sure the product reflects that."

And Ikeda is actually in a position to make that happen. He's not a business guy or a Mad Men marketing sort – he's moved upstairs after spending decades in design, a tenure that included penning the third-generation TL, the best-selling Acura model of all time and one of the best-looking. This marketing thing is new, and he's trying to make sure that the cars and the messages about them align. He admits there was a disconnect in the past.

Of course, it takes much longer to produce a new car than it does a new commercial or marketing campaign. To therefore expect the 2018 TLX to be the embodiment of this new Acura direction would be unfair, but is it at least a course correction pointing towards it? 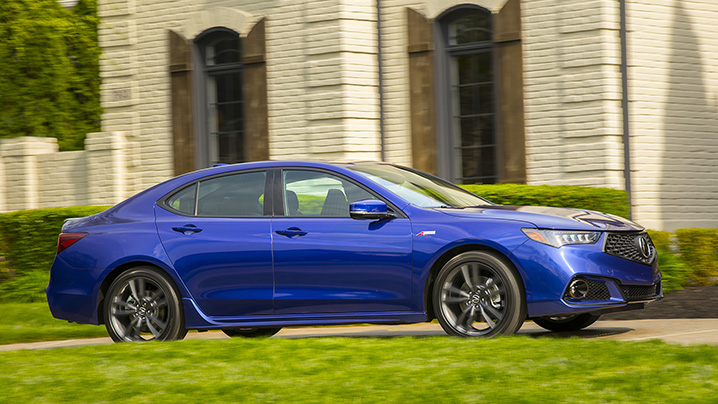 Visually, it would seem so. Acura is attributing the MDX's uptick in sales last year as proof positive that its new diamond pentagon grille is an improvement over the old robo chicken beak. A smattering of social media comments would indicate the revised sheet metal – everything forward of the A pillar is new – represents an improvement. Of course, an "improvement" is quite a different thing from "sexy," "cool" or "I must have that."

The interior definitely isn't any of the above. Yes, the new touchscreen interface features better graphics and quicker responses, and the addition of Apple CarPlay, Android Auto, and the full complement of AcuraWatch accident avoidance technologies as standard equipment is laudable. However, the materials and construction remain only a tick above admittedly strong Honda, and the design challenges neither Mercedes elegance nor Audi modernity.

Even the new, certainly welcome elements implemented for 2018 are just examples of playing catch up. The LED accent light piping? You can get that in a Mercedes C-Class or Audi A4. The A-Spec's red leather? That's an option on the C-Class, BMW 3 Series, and Lexus IS. The new driver seat thigh extension? A BMW and Infiniti staple for years. New features like heated rear seats, a heated steering wheel, surround-view parking cameras, and power-folding side mirrors? A Kia Optima has those.

As Heidi Klum might ask on Project Runway, is there anything fashion forward here? Sure, there's only so much it could do with a mid-cycle refresh, but is Acura trying to lead, to do something that truly stands out from the crowd? Forget Power Rangers and attention-deficit editing, isn't that what Millennials are really looking for? 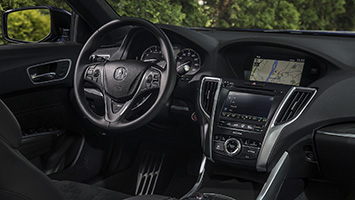 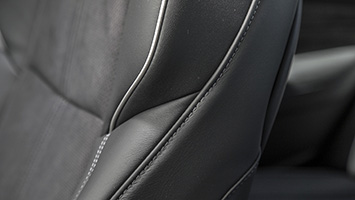 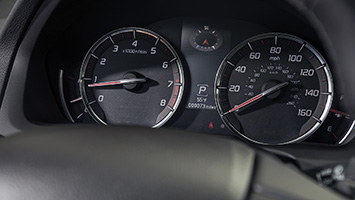 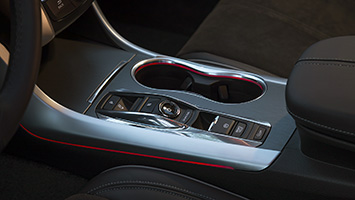 And what of the new A-Spec? It gets a different version of the new Acura face, with matte finish diamond grille elements and "black chrome" trim that extends elsewhere on the car to most areas that are regular shiny chrome on other TLX's. It does improve the look. Mechanically, the A-Spec gets 19-inch wheels, stiffer damping rates, and changes to steering effort. With optional Super-Handling All-Wheel Drive, it further adds a larger rear stabilizer bar, different springs, and a quicker steering ratio. Front-wheel drive cars still have Precision All-Wheel Steer (P-AWS).

It's a bit louder under the hood, as the A-Spec shares the regular TLX V6 model's 3.5-liter engine good for 290 horsepower and 267 pound-feet of torque. That's unchanged for 2018, and although its nine-speed automatic has been altered for a "more refined feel," it continues to stumble when multiple shifts are needed. The base 2.4-liter inline four carries over as well, continuing to produce a meager 206 hp and 182 lb-ft of torque despite weighing as much or more than turbocharged competitors.

Now, Acura is quick to point out the V6 produces considerably more horsepower than those turbo four rivals, which are pricier when similarly equipped. Fair point, but their torque figures are comparable, and like any rev-loving Honda, much of that power doesn't show up to the party until the tach is spinning well past the five-grand mark. It doesn't feel quicker. It feels like it has the capable, ultra-smooth but not especially lust-worthy engine of a Honda Accord. That's perfect for refined luxury duty, but is it for something described as a "performance car," precision-crafted or otherwise? 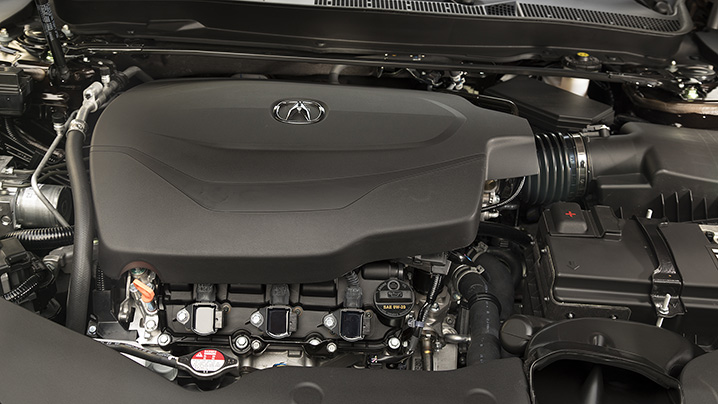 As if anticipating questions regarding why the A-Spec doesn't come with a different engine or at least a power bump, Acura reps insisted that's because A-Spec cars haven't done so in the past ... as if anyone actually remembers previous A-Spec models enough to even care that they're deviating from tradition. This isn't BMW M going turbocharged.

Now, power aside, the A-Spec is indeed a better car to drive than the regular TLX V6. There is a crisper feel to its steering in particular – especially on center – and you do feel a closer connection to a car that's otherwise a bit distant. The Super-Handling All-Wheel Drive lives up to its name by mitigating understeer around corners, and although the suspension has been firmed up a bit, the ride quality remained nothing but buttery smooth over a diverse selection of crummy Kentucky pavement. The A-Spec does feel a bit sportier, but regardless of trim, you should expect a car that isn't especially memorable to drive but certainly very nice. 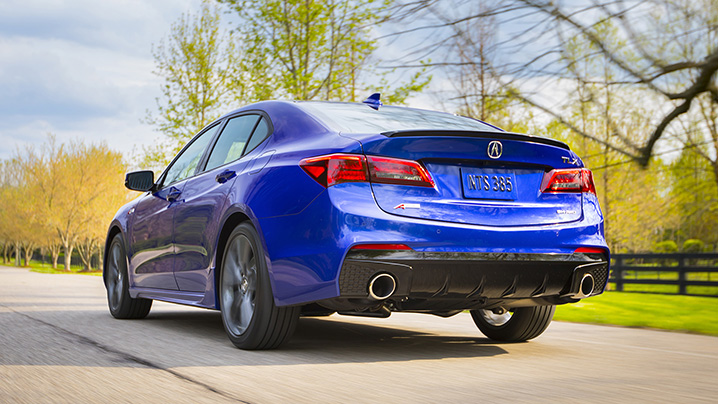 And hey, we're guessing potential Acura TLX buyers should be just fine with that regardless of whether they were born between 1980 and 1994. And here's another thing: the Acura TLX hasn't been a sales turkey. Sure, it's miles from being the best-selling luxury sedan that the third generation was, and today's 3 Series and C-Class sell at least twice as many units. Yet, the TLX outsold the previous-generation Audi A4 (by quite a bit, too), was virtually tied with the Lexus IS and bettered the Lincoln MKZ and Cadillac ATS.

So people bought the TLX. It's just who bought them that Acura is trying to change. Or more accurately, is trying to augment beyond middle-aged folks with a keen eye for value and rational buying decisions. Maybe the 2018 TLX will indeed add younger and hipper buyers to that existing clientele, but it seems like those commercials will have a better chance of making that happen than the car itself.