Seeing Red: 70 Years of Ferrari at the Petersen Museum

When the Petersen Automotive Museum completed its extensive 14-month renovation and reopened its doors in December of 2015, automotive enthusiasts were treated to a refreshed 95,000 square feet of exhibit space boasting 25 separate galleries. At the time of opening our favorite of those was the Precious Metal exhibit in the Bruce Meyer Family Gallery, featuring some of the world's most desirable cars all painted in silver.

While we're sad the Precious Metal exhibit is no more, the gallery is now filled with something perhaps even better - an exhibit celebrating the 70th anniversary of Ferrari called "Seeing Red". The theme of a single color has been maintained (red, of course), and the gallery features eleven of the most significant road and race cars built by the Prancing Horse in the last seven decades.

Perhaps the most historically significant car in the collection, however, is a 1947 Ferrari 125 S. Although this particular vehicle's history is difficult to trace, with many early race cars being wrecked, cut up, or combined with other cars, many believe this example, chassis 010I, to be the very first car to carry the Ferrari badge. Not surprisingly, the 125 S was a successful race car, winning six of the thirteen races in which it competed. 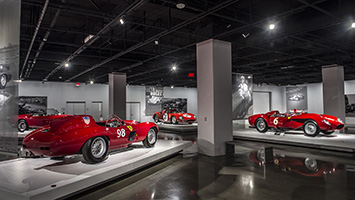 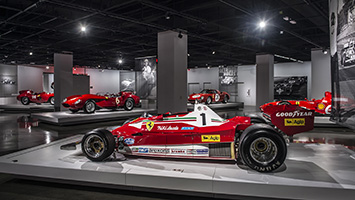 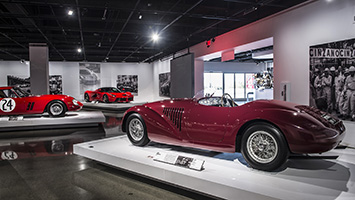 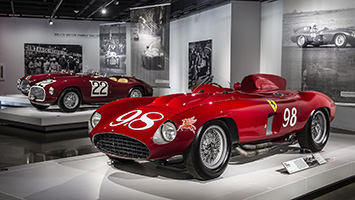 "We're so thrilled to bring some of the world's most beautiful Ferraris to the Petersen," said Bruce Meyer, founding chairman of the Petersen's Board of Directors. "Seeing that Rosso Corsa paint and the beautiful curves of the body work is always enough to make your heart skip a beat. 'Seeing Red' will be one of the most significant gatherings of Ferraris in the world and I'm so pleased to be able to share it with the public in our gallery."

"This new exhibit is another example of how the Petersen views cars, as art, and nothing is more appropriate than red Ferrari models," said Terry Karges, Executive Director of the Petersen Automotive Museum. "We're confident this exhibit will helps us continue our success and really get people talking and learning about Ferrari."

The Seeing Red: 70 Years of Ferrari exhibit at the Petersen is scheduled to run through April of 2018. For more details on visiting the museum visit www.petersen.org or call 323-930-CARS

Featured GallerySeeing Red: 70 Years of Ferrari at the Petersen Museum