Is this a Land Rover Range Rover Velar SVR testing in the wild? It hasn't yet been two months since the Land Rover Range Rover Velar's official debut, and the company already has a high-performance version of the new SUV in the works. One of our spy photographers caught a Velar covered in camouflage, and it doesn't look like much, but according to him, it sure sounds like a possible SVR or other high-performance trim.

Our photographer says this thing was seriously loud. Unfortunately, without video or sufficient onomatopoeia, we can't really share that noise with you. But we do have these spy photos that show this Velar is devoid of the usual scoops, vents, and bulges expected of a high-performance vehicle. It actually looks like most any mid- to high-level trim Velar. In comparison with those Velars, the main grille and lower bumper have no changes. The only visible difference is a lack of plastic strakes on either side of the center bumper grille. We can't really see behind the camo, but we'd venture a guess bigger vents are hidden there. No changes to the side or rear are evident either, aside from the unique wheels that aren't available on current Velars.

It's not a big surprise that Land Rover might have a fast Velar in the works. It's based on the Jaguar F-Pace, and rumor has it that an SVR rework of that sport ute is on the way, too. Our spy photographer reports having seen F-Pace SVRs out testing. With the powertrain in development, it's only logical to spread the costs of engineering across two models. As for what that engine might be, our bet would be on the supercharged 5.0-liter V8 found in the Range Rover Sport SVR and Jaguar F-Type R. While it could potentially have the 575-horsepower version in the F-Type SVR, Land Rover may introduce that engine in a future iteration of the more expensive Range Rover Sport SVR. 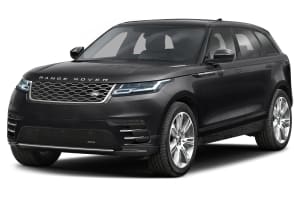 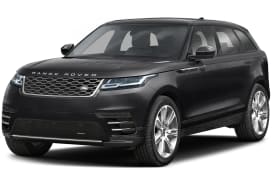